I have cooked a few tenderloins with reasonable success in the past. Typically, I marinate the tenderloins BEFORE I vacuum seal the meat. This time, I would like to leave the marinade in the vacuum sealed bags while it cooks.

I would appreciate any input from those who have used marinade in the vacuum bag an the placed in the water to cook.

My plan is to SousVide for 2–3 hours, then remove from the bag, pat dry and seer on a cast-iron skillet.

Hey @DAP I believe it can be done. Don’t see why not. We have a few threads on this that you might find helpful:

Also, I believe I have seen @john.jcb mention him making pork tenderloin with mariade (not sure if was before sous vide, or if the sauce was also brought to the bag for its cook).

@AlyssaWOAH not me I’m afraid. I really do not like marinades with my proteins. My opinion, and I may be wrong, is that if the marinade is successful you taste the marinade and loose the base flavor. Pork tenderloin is actually quite delicate in flavor and I prefer to season to only enhance it.

Traditional dishes like Beef Bourguignon are different where a tough cut of meat is braised and cooked all day. But even here the sauce is the star of the show for me at least.

There are few marinades which penetrate enough to instill much flavour let alone “tenderise the meat” as tradition has it.

The Science And Myths Of Marinades, Brinerades, And How Gashing Can Make Them...

Marinades work on some foods but not on others. A good marinade contains certain ingredients but not others. Here's the truth about marinades and brinerades.

Pork tenderloin is already tender, but I’m partial to the marinade at 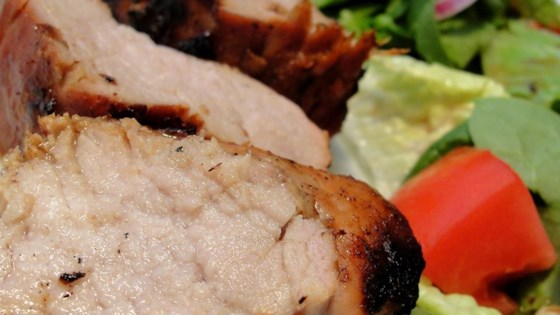 
Don’t add the oil in the recipe to the marinade, just brush it on before grilling or searing.

When I read the recipe the first time, it sounded as though the cinnamon would overpower the flavor of the meat, but it doesn’t.

I cut 2 tenderloins in half to fit in 2 quart-size bags, and split the marinade between them. I use the zipper bags with the vacuum valve (Freshsaver), and raise the valve corner onto a thick cookbook, and vacuum the air out until the liquid comes up to the corner, rather than use the immersion method.

Sous vide at 135F for at least 3 hours (can be left in up to about 6 hours without losing texture). This temperature leaves it just a little bit pink, rather than completely white.