I have had my APC for quite awhile but I had never done a nice big chuck roast. Now I have cooked a 4 pound piece using the 130F/54C 48H method and the results were very, very nice. Great roast beef flavor, slices well and is quite tender. 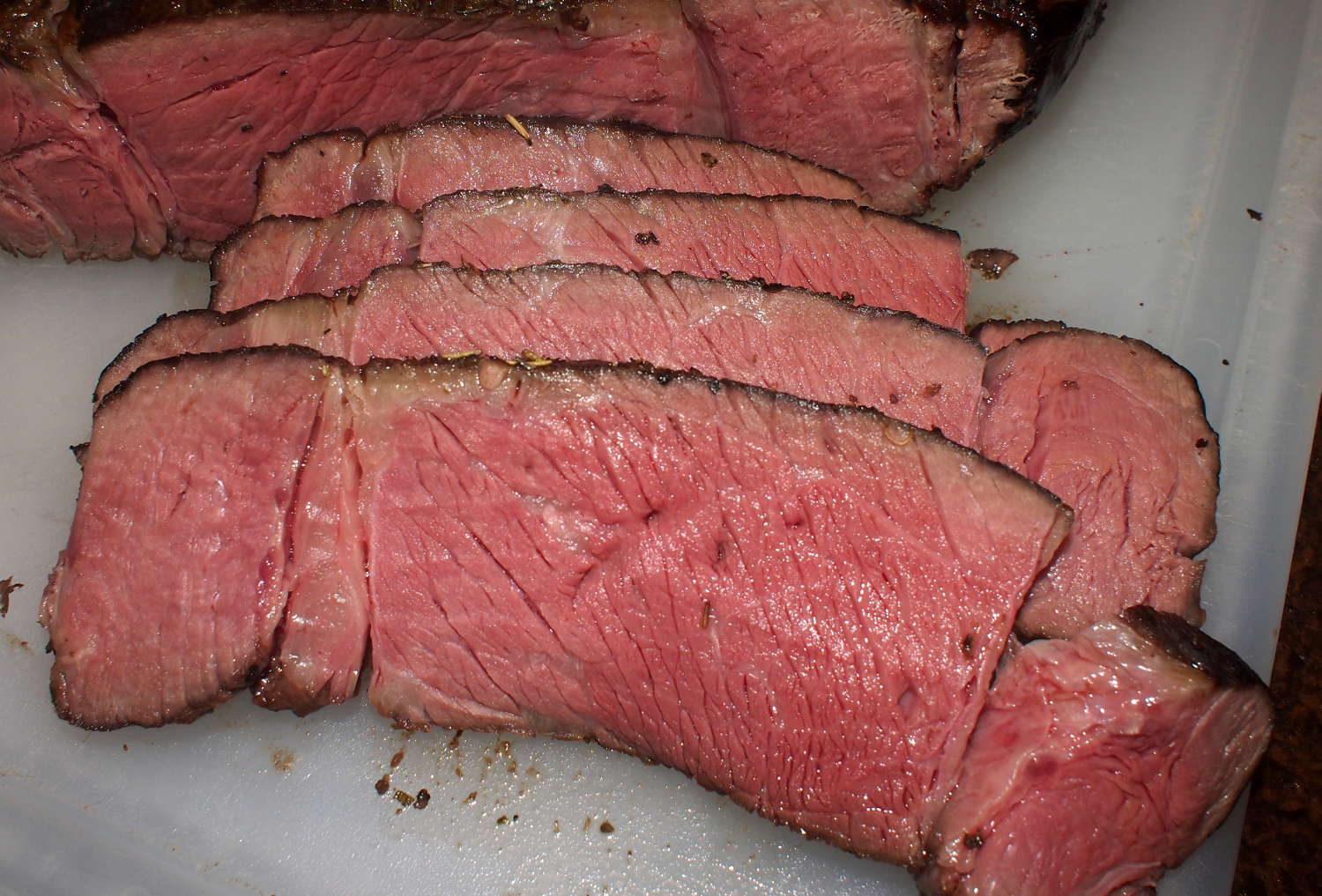 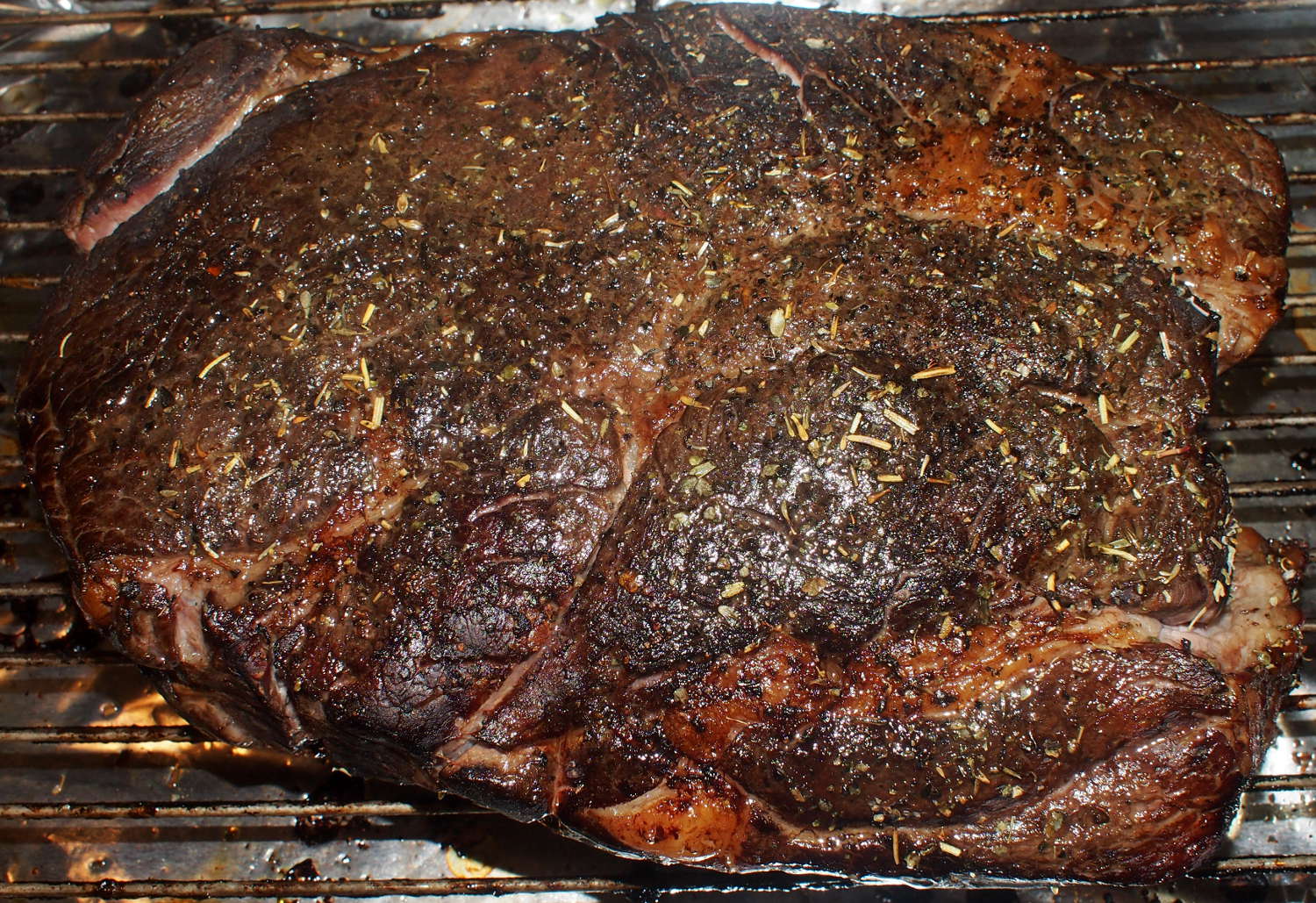 Looks fantastic! One more thing I have to try!

Where’s my fork and horseradish cream!!!

looks very good! i like my chuck roast cut in pieces and simmering in wine or dark beer, oignons, garlic,ginger,red pepper, etc. etc for hours, the last half hour i add some dried prunes, abricots or figs. is it possible to put such a combination in a sealed bag and sousvide it for 24 h, thus combining the best of the two worlds? Or should that be done with different meat? thanks! Peter

P. what you are contemplating is cooking your braise using SV. The two techniques are significantly different and will have different outcomes. Using SV you will not have the concentration of flavours you gain in a braise.

You might want to try this: after SV cooking decant the contents of the sealed bag and reserve the meat. Simmer to reduce the rest. Long cooks sometimes cause flavours to change. For example, i would just use whole unpeeled garlic to keep bitterness from developing. Add the meat to the reduction just long enough to reheat it to service temperature. If you add enough herbs near the end you won’t miss the flavour boost of browning your meat. I know, - absolute heresy here, but in my opinion Maillard is over-rated in mixtures.

Try it and please share with us on your results.

Thank you very much Chatnoir! It wille take a few weeks before I will have the opportunity to give it a try.

The last 48 hours I prepared a similar meal with Lambshanks: I seared them first and then put them in bags adding carrots, celery, garlic, onions, ginger, rosemarin, pul biber (Turkish red pepper) and beer. Then sealed the bags and cooked it 155 F for 48 hours. After that I reserved the meat and reduced the liquids, as you suggested. It was delicious! The meat was rosé and tender. The sauce concentrated and powerful taste. However, the vegetables and herbs did not work out on the meat, as it does when I prepare it as a braise.

Question: would the effect of the vegetables and herbs be stronger if I would do the searing after cooking and/or when I use meat cut in cubes of 1 inch?

Just something to keep in mind. Vegetables require higher temperatures to cook than meat. Vegies take around 183F/83.4C for pectin conversion. Below this point they may be softened slightly but not cooked. It isn’t a big problem as most vegetables can be eaten raw. However,if you are looking to make a puree or mash it becomes more important that the vehies are cooked completely.

You are welcome Peter and good job on your delicious Lamb Shanks.

It seems to me that for SV you might need to cut the hard vegetables smaller than you usually do when braising. Small dice (aka brunoise) vegetables will soften as the meat SV cooks and should completely cook during the reduction as long as the reduction lasts 8 to 10 minutes.

The key is to not overcook the vegetables to the point where they have become tasteless mush which often occurs in a long braise. When braising i usually discard the cooked vegetables that have given up their flavour and add fresh ones to the mixture for the last half hour or so. You might try doing that in the reduction stage to get the improved vegetable flavours you were looking for. Always taste as you go.

I don’t understand your culinary term, " . . . did not work out on the meat". If you mean, - infused with flavour, it usually doesn’t, Besides lamb has it’s own stronger flavour that may dominate the other ingredients. That’s why we use injectors, but that’s beyond the scope of this post.

Answer: I’ve given you my opinion on searing meat to be cooked in a mixture. I don’t find it worth the time and effort. You might, - hey it’s your food. Remember, one-inch cubes will require less cooking time. Meat’s meat, it won’t absorb much flavour beyond the surface no matter its size. That’s the reason why humans invented ketchup and other sauces.

To enhance vegetable and herb flavours we usually just add more to the menu item. Woody herbs can be added early. Soft herbs go in at the end to preserve their delicate flavour and aroma. It usually takes twice as much of an ingredient to make a discernible flavour impact in your recipe. That’s the way our sense of taste works, it’s geometric.

Cooking Hint: The cat usually finds it worthwhile to occasionally brown a half dozen cooking onions in a little bacon fat and use them as an ingredient when appropriate in a variety of items from on Pizza, in Stew, Quiche, even with Lamb Shanks. They are a significant time-save. They can be frozen in recipe-size parcels and they will keep for a couple of months if you don’t cook much. Remember to label and date everything to prevent freezer mysteries.

Bonus Hint: A mixture of those caramelized onions with an equal amount of chopped raw onions, an old west side of the lower Mississippi River trick, adds an interesting complexity to dishes like your Simmered Chuck Roast or Lamb Shanks. Add them mid-cook or later.

Thanks very much for your thorough reply!

The vegetables were sufficiently softened by the 48 h SV. So I filtered them from the liquid, which I reduced. Then added the vegetables again. That was effective.

Sorry for my English (I’m Dutch), I indeed referred to infusing with flavor. Is my conclusion correct that infusing is stronger with 3 hours of braising then with 48 hours SV on 155 F?

Thanks again, I will try out your welcome suggestions.

You are welcome Peter. It seems to me that you might need to cut the hard vegetables smaller than you usually do when braising. Small dice (aka brunoise) vegetables will soften as the meat SV cooks and should completely cook during the reduction as long as the reduction lasts about 10 minutes.

I don’t understand the culinary term, " . . . did not work out on the meat". If you mean infused with flavour, it usually doesn’t. That’s why we use injectors, but that’s beyond the scope of this post.

Answer: I’ve already expressed my opinion on searing meat to be cooked in a mixture. I don’t find it worth the time and effort. You might.

To enhance vegetable and herb flavours we add more. Woody herbs can be added early. Soft herbs go in at the end. It usually takes twice as much to make a discernible flavour impact. That’s the way our sense of taste works.

Peter, you might want to keep Sous Vide cooking for cuts of meat and poultry that you would normally roast, grill, or pan fry.

And please don’t apologize, like most Dutch your English is excellent.

As you originally thought your regular braising might be better to get that lekker result we all desire.

Tonight I finished a 48hr cook on a beautiful chuck roast and it was very good. Thanks Richard.