New user has a couple of questions!

I just bought the 900w BT/WIFI unit to give to my wife and am trying to learn what I give it to her!

I have to say that reading this forum makes me wonder if I should take it back before opening the box!

But I will persist and hopefully all will work out fine.

My wife is not at all “techie” - and I am not that much better - we are bothe seniors! But I have learned that she will be able to set not only the temp but also the timer manually and maybe that is all we will ever do! Unfortunately I have also learned that it seems the timer can do nothing but beep! I had wronglt assumed it could turn off or drop to “keep warm” temps etc. Not so it seems!

I am not clear if the ipod will enable me to stop / start, adjust temp settings etc from a remote location - as long of course as I have a wifi connection at that location to access the internet. We do of course have wifi throughout in the house.

Maybe I would need an iphone to do that rather than an ipod? Maybe it isn’t even possible with an iphone? I am unsure.

(2) If I cannot control it remotely with an ipod, and if we need to be away from the house at the time the cooking should be done, Is it fine to let the food sit a few extra hours at the cooking temperature (with the alarm beeping away in an empty house!)

The alternative I thought of would be to set an external 110v timer to shut off the power once the cooking time is done. Not sure that is good either though as the food would then need reheating later.

Appreciate any advice on the foregoing. I am still looking forward to using the Anova together with my wife, but I have to say I am not as enthusiastic as I was before I learned more about it!

Hope it won’t wind up either being returned or banished to the basement with many other small appliance purchases made over the years!!

I can talk about cooking time. One of the wonderful things about this mode of cooking is that there is no real “stop cooking” time. A couple of hours makes no difference whatsoever.

Best suggestion would be to not worry about the timer on the device and just use another timer that you are already familiar with using and hearing. It doesn’t matter if that’s a phone or a watch or the timer on your stove. As Richard suggests, in most instances being over the suggested time is usually not a problem. Eggs are really the only thing that I’ve found where some time precision is preferred.

Setting the temperature manually is quite simple.

Thanks RichardOL and Ember for your input!

Sort of confirms the conclusion I was reaching to just use the APC manually - it doesn’t seem as though the built in timer nor the app will be of any great advantage.

I had imagined that the timer function would be more capable in terms of turning the device on and of at specified times. I am surprised to learn it does not.

As mentioned, my wife is not at all into ipods, iphones, apps etc (Although I have succeeded in getting her to use a Mac air laptop for emails and such!) I’m sure a straight manual operation will be her preference. If she had to depend on an app to use it, it would not get used - other than maybe by me!!

I will check out the app though if only to review the recipes etc. and we’ll see how things go from there!

All of the recipes from the app can be found here:
https://recipes.anovaculinary.com/

No real need to install their software.

To confirm, you’ll be able to work the device manually. It’s pretty easy to do, too. The timer will just let you know when your cook is done.

Additionally, The device can use the app with an iPad, it’s just not optimized for it.

Everyone on this thread was very helpful in their response to your question! Hope that you do fall in love with the device. It’s definitely gives a transformative cooking experience!

I am looking forward to getting to into trying the APC with my wife! She always has said we should do more cooking together, and I do love gadgets so this might get me more involved as she wishes, and as such it will by my “Mothers Day” gift to my wife.

I have never been much into cooking, but I am an avid home brewer of beer, making it from scratch, barley that I mill, and hops that I grow!

I certainly was taken back a bit when I came across this “community” website and read so many negative comments, but from experience on other forums (other subjects such as Airstream trailers) I know that it is unhappy people that tend to post their thoughts far more often than the majority that may be completely happy with the subject, so we will go forward with that in mind.

Much as I embrace technology myself, (My wife not so much!) I also agree that oft times, simplest is best, and maybe that will be exactly how we wind up using the APC - just to set the temperature, and maybe the timer!

I am still not clear if I can use my ipod / ipad to remotely stop start the device as I had hope, but that will soon become obvious once I give it a try and learn the apps capabilities - or lack thereof!

It doesn’t matter to me that much either way - except that I will feel I have bough this somewhat under
false pretences if it is too basic! In that event I will only have myself to blame anyway for not doing enough research before buying

If you are on Facebook, check out this group #anovafoodnerd fam There is a lot of experience and food pictures. You need to request to join, but that is no problem, it is a happy group of foodies.

Here is one, my Christmas standing rib roast. 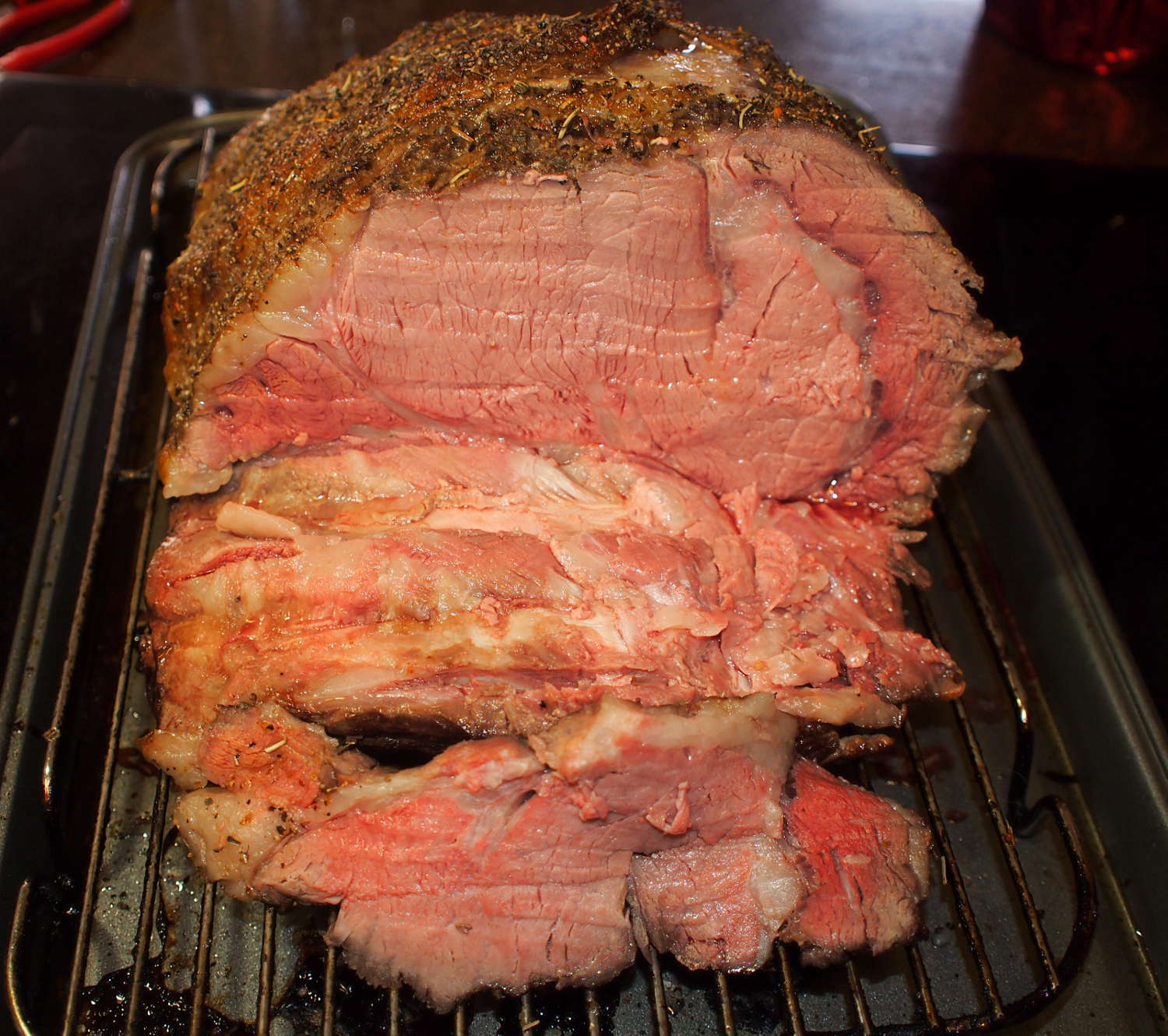 @wingeezer Pretty cool that you’re a homebrewer of beer!

I haver never brewed beer myself, but I have seen some recipes floating around for sous vide beer. Might be worth an experiment. There’s an post about it, but it is a few years old (might still be relevant): https://anovaculinary.com/brewing-beer-with-the-anova-one/.

I also second @RichardOL. If you’re on Facebook, we also have a crazy active group on there. Request to join and I’ll approve your request right away! I’ll drop the link here: https://www.facebook.com/groups/anovafoodnerd/

I have been brewing beer now for about five years with fantastic “Craft beer” results. Hate to think how much I have invested in equipment though! I keg the beer and put it “on tap” in the house.

I’m sure some of our neighbours think I’m making moonshine when I set up in the garage with latge kettles, propane burners, copper cooling cols etc. I expect to have the police roll up any day!

Results are really great - honestly better and much less expensive than most beers I could buy! So good that I now have to brew for my son in law as well!

A lot of work though, I brew five gallon batches - many for brew ten and I may go that way, the amount of work is the same. Brewday is about a 6 hour process, so it helps that I am retired! Takes maybe 3-4 weeks for it to complete after that with very little further work.

I did try rewing beer back in the seventies from extract malt kits but it was nt in the same league!

As with sous vide, temperature control is an important issue, and I use two chest freezers in our garage that I have converted with external thermostats to become refrigerators / heaters - I use them for fermenting 6.5 gal. carboys of beer, and also for cold conditioning finished beer in 5 gal. kegs!

What I find really enjoyable about the hobby as a retired engineer is that brewing combines skills of art, cooking, science chemistry, and engineering!

Probably I will enjoy sous-vide for some of the same reasons - but really the APC is my gift to
my wife …No … really!

I will take a peek at the facebook link, thanks! I am on facebook, but honestly have never used it much other than to spy on our grown daughters to see what they are getting up to!

PS - In case anyone wondered, the nick “Wingeezer” is because I am an old “Geezer” who sometimes rides a Honda"Goldwing " motorcycle!

I have have just gotten into the habit of using the name on different forums rather than thinking up new names for each!

I just took a look at the link that you provided with respect to using the APC in conjunction with possible use in homebrewing.

It isn’t a complete method of brewing beer as such, but rather a way to use the Anova to facilitate a certain part of the brewing process - referred to as “mashing” the grain.

But it is an excellent idea for home brewers, and I certainly plan to give it a try.

Accurate temperature control is important during the “Mash” to achieve desired properties.

Many of us use an insulated picnic cooler to carry out the the mash - but the mash takes about 60 minutes, so inevitably it cools a few degrees during that hour, and that is less than ideal.

I can see how the Anova could be used to more accurately maintain the temperature at the ideal level throughout the “mashing” part of the brewing process, and I will certainly be giving it a try! (If my wife lets me use it of course!)

Thanks Richard - that looks “some tasty!” will check out facebook!

IMO, the only semi-useful thing the app does is allow you to apply the temperature offset of the unit once you have determined it. The catch is that it is only applied when using the app. I am not aware of any way to permanently fix the offset into the unit.

On the brighter side, I’ve found that the offset seems to be constant and doesn’t drift, at least I haven’t experienced any drift yet with my cooker.

Not sure what you mean by offset. Are you speaking about an error in the unit’s temperature reading that you are correcting for after you have calibrated it against a known accurate thermometer reading?

Fairly wide range of error too. My first unit would read IIRC, like only 0.3F high - it was very accurate. My current one reads 1.7F low (at 129F it’s really 130.7). I can’t recall exactly, but I think there might have been a batch that slipped by without being calibrated or were mis-calibrated, and my second one might have been from that batch. At one time Anova was offering to have people send the units in for re-calibration, to me it was just simpler to use a submersible probe from Thermoworks to keep an eye on it until I determined that the error was constant at all temps I tested.

Good idea! I do have a Therma K handheld thermocouple type instrument with a variety of probes that I use with my homebrewing hobby, supposedly certified accurate to a fraction of a degree, so I’ll be able to double check the water temp.

@wingeezer thanks for the beer info - learned something new today! Definitely let us know how your first few cooks go. Interested to know!