Thanks acs and Ember for great feedback. Looks like a trip to the butcher rather than the supermarket.

Chicken Breast (no bone) will be served hot. Anyone know of a sous vide chart where I can find all times / temperatures for different cuts and thicknesses of meats / fish etc? The Anova Recipes look great, but generally I’ll put together my own recipe and just want to cook the main ingredient.

I’ve been basing my experimentation on the information on the SeriousEats website. The information there goes somewhat deeper than that in the app. Very much worth reading the chicken breast fillet section. I’ve been doing batches of cold breast to have on hand for salads or sandwiches. Just brilliant.

Here’s my “cheat sheet” that I’ve derived from sources all over the web over the last year and a half. The check marks are by the ones I’ve actually tried and approved. I have this printed and posted on the inside of a cabinet door near the Anova machine.

I got my APC for xmas, love it so far. also impressed with the welcoming community here, only just became aware of it yesterday!

Did some sirloin steaks. The first batch i didn’t pat dry and the steam seemed to partially cook it through during the cast iron sear. Was still delicious, juicy and tender.

Second batch of sirloins I preseared, added some nice cultured butter, and I patted dry and it formed a beautiful crust during the second sear. The first sear and butter seemed to also improve the flavour, presumably distributing the caramelisation.

Last night i did some salmon fillets, with some dill and olive oil and i used this https://www.amazon.com/gp/product/B01LZ8I8Z5/ref=as_li_ss_tl?ie=UTF8&psc=1&linkCode=ll1&tag=anovacommunity-20&linkId=0b637612d4e37a29586b9eb1081a013c to fill the bag with smoke, and let rest with smoke for about 15 minutes for the oil/salmon to take up the smoke. by the time i submerged the bags, basically no smoke evacuated. i also made a little foil tent during the skin sear and pumped a bunch more smoke in. tasted delicious!

The salmon cook i did entirely by voice control via alexa, though i misread the recipe i was looking at and told anova to cook at 57 degrees instead of 51.7. only realised about 20 minutes into the cook, at which time i lowered the temp to about 54.4 which is what the anova app suggested for firm and flaky. the colour of the salmon was pale as a result of the high cook, but it was still delicious. will have to redo at a more appropriate temp, although i thoroughly enjoyed it anyway.

Woah, this is awesome.

Have to admit, I had been contemplating a smoking gun, but had wondered just how much the flavour could permeate.

Here’s a pic of the smoke in the bag: 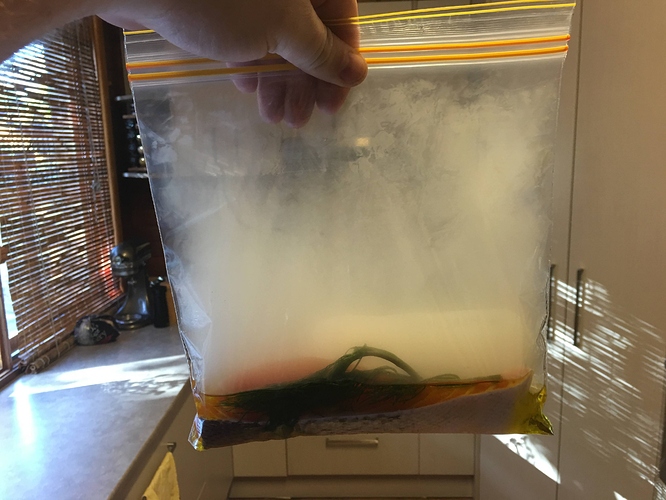 Next time I will use a bit less oil as well, as it diluted the smoke somewhat, but was still readily detectable if tasting the oil.

I also did the skin sear in the same oil.

OK. You’ve sold me. I just purchased one from the Amazon link. Hoping the shipping to Oz doesn’t blow out too much. Had looked at both the PolyScience and Breville options. Even if it proves to be not of the greatest quality, it will serve as a test unit.

I purchased the gourmia smoker and a Bernzomatic TS8000 together, shipping was about $14.60aud to melbourne australia.

Thanks Walter. Amazon shipping down here can vary so much, can’t it? This looks to be a good’un though. Ta.

Chicken Breast (no bone) will be served hot. Anyone know of a sous vide chart where I can find all times / temperatures for different cuts and thicknesses of meats / fish etc? The Anova Recipes look great, but generally I’ll put together my own recipe and just want to cook the main ingredient.

I haven’t found any all-encompassing charts. Seems that, like you, all I find is bits and pieces out there. As mentioned by Ember, the Serious Eats site is a good resource. Kenji’s recipes are generally well put together and tested. The Anova site recipes seem to have a large portion of untested user submitted recipes, lots of variation there, some not for the best.

@JerryDownUnder, there’s a ‘recipe’ in the app (and on the Anova website) entitled “To brine or not to brine” or something similar, which gives good time and temp for boneless breast. I used it last night for a base for warm moist chicken breasts to go with a salad. 2 hours at 146F (63.3C).

Chicken served warm straight from the bag on a salad is great. Very moist and easy to make. I will buy chicken breasts in bulk and individually freeze them in a vacuum bag. They thaw very fast and it adds little time to the overall cook. I do the same thing with pork tenderloin.

Awesome - fantastic response to my questions and many thanks particularly to Ember, acs and Reuel_Nash.

Excited to finally receive my sous-vide device a couple of days ago, so decided to try it earlier today.

HOWEVER, it didn’t turn out to my expectation. I’m preparing rendang, an Indonesian infused-spices beef dish and had bought frozen chunk of meat without specific cuts/parts mentioned. But I thought, with sousvide everything would be tender regardless.

So I rub some of the paste to cover all the frozen meat, throw it into a ziplock bag and put it on a hot bath of 5 hours of 60C and 1 hour of 70C. I took this reference from a sous-vice beef stew recipe, considering that would be the kind of texture I’d want for my beef.

6 hours went by and was so excited about the result, imagining the melt-in-your-mouth kind of texture. BUT I WAS WRONG. The ziplock bag was filled with water (pretty sure from the frozen meat) and the texture + taste is like…boiled meat. I’d admit it wasn’t 100% vacuumed but I did it as much as I can. I used a knife to cut it through, and it cuts nicely but definitely not tender/soft and… very solid? Nothing like how a marinated meat should taste like. Super disappointed.

What went wrong, anyone?

Oh noo! Sorry to hear about this, Mar. It sounds like it could be a few things, but it’s tough to say without knowing the cut of meat. Can you estimate the size / thickness of it? The cut of beef matters because different cuts require different times and temperatures. The beef stew recipes have a higher temp than a lot of other recipes because the cuts of beef used–like chuck roast–have tougher connective tissue and require increased time and temp in order to break the collagen down and tenderize the meat. So, if you used a thick cut like chuck, you’d need to up the time and temp, or you’d get a tough, over-dry result, whereas 140ºF / 60ºC for something like a strip steak or flank steak would result in a well-done steak.

Regarding the water–some cuts will expel more moisture as they cook than others, particularly slow-cooking type meats like chuck and brisket. It very well could have been the moisture expelled from the meat, particularly because seasoning the meat while frozen makes it difficult for the seasoning to set in. There’s also the possibility that the bag could have allowed water in due to a leak somewhere.

Disappointing first attempt with my Anova. I decided to make an ice cream base using egg yolks. I’ve always made eggless ice cream because I didn’t want to use raw eggs.

Here are the problems/questions:

The bluetooth connection is virtually useless. I have to be in the same room to use it–what’s the point? Oh yeah, if I want to easily set the time, I have to use the app as the Anova circulator doesn’t have an easy way to set the time. Frustrating.

The temperature is very inaccurate. I used my Thermapen, (even tested it’s accuracy in boiling water) and found the Anova to be a couple degrees under what it said sometimes, and other times closer to what was listed. Just because you show decimal points, doesn’t make actual temperature more accurate.

I used an immersion blender to mix the egg yolks, sugar and dairy. By doing so, it incorporated air into the mixture which made the bag float somewhat even when sealed. Then the ziplock gallon bag leaked. I don’t know if the mixture isn’t diluted (I’ll find out tomorrow when I churn it in the ice cream maker). After I removed the bag, I ran soapy water, then clear water through the circulator to clean it out. I hope that worked. There should be a better way to clean the device in case of bag failure.

The community forum is very difficult to search easily.

Finally, what is one supposed to do when you’re done cooking? Leave the circulator in the pot? Take it out and dry it? Sit it somewhere safe from it melting other things (since the metal is very hot)? Poor instructions.

Thanks for the much elaborated reply! I’ve see your posts on several thread and seems like you know a lot about this device!

So I’m gonna go onto my 2nd experiment later - lamb loin chops. It comes in a vacuumed packaging already and it’s frozen. Currently I’m thawing it and thinking of using its prepackaging to sous vide to avoid the same mistake. What do you think about using pre existing packaging? I figured I’ll do the seasoning after the sous vide session, right before searing it.

i found my thermapen usually shows the anova to be only 0.1-0.2 degrees under really close to the cooker, and in a 15L container up to about 1.5 degrees under at the furthest point away

that said, i don’t particularly care. i just measured it for curiosity’s sake.