I’m ready to purchase a WIFI + Bluetooth (900 Watt) 120v U.S. cooker. However, I’ve noticed that there appears to be different versions/releases. On Amazon I’ve come across units labeled "Anova Culinary A3.2 as well as “Anova Culinary A2.2” Yet, on the ANOVA website it indicates that there is now the Anova Precision Cooker “4.0.” Can someone help explain the differences? Is the 4.0 on the ANOVA website the latest and greatest?

The A3.2 is the Wi-Fi and Bluetooth model
The A2.2 just has Bluetooth

The AN400-US00 is indeed the Nano device, which is the newest and latest model.

I’ve had the Bluetooth version for 3 or 4 years, says 1.0 on the tag,
but appears to be identical to the 2.0 and 2.2 bluetooth. The 3.2 has
a bluetooth plus wifi option. The nano is a lot shorter than the rest,
but otherwise the same bluetooth or wifi.

But this website definitely describes the PC as “Precision Cooker 4.0”. What’s the difference between that and the A3.2?

There is no difference - they are the same models. I agree it’s a little confusing. I will talk to the team today to get that adjusted.

isn’t there maybe the difference in the “your food is ready” sound loudness? Because I bought my Anova 1 year ago, meanwhile my friend bought it in March or April this year and her Anova doesn’t beep so loud as mine when then food is ready. And the color of the Wi-Fi icon is different on our Anovas - mine is blue her is green (if I remember well).

I’ve noticed that the Anova website states that the Precision Cooker 4.0 serves up to 12 people. However, the version I see on Amazon and In Best Buy says “Serves up to 10” people (on the physical box). Is the website wrong, or are these actually two different versions? 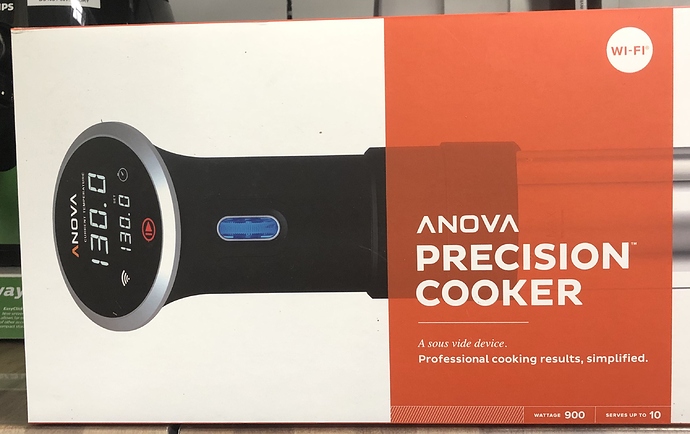 The number of people an instrument can serve means the resulting number of portions of a cook. What’s a portion?

In my photo above, this is the BT+WiFi Version. It says on the box that it is 900W and also states “Serves up to 10 people.”

Yes, but I guess what I’m mostly trying to understand is whether or not these could possibly be different from each other (i.e. upgraded firmware, etc) or is it just a marketing thing. I don’t truly care if it serves 10 or 12…shoot, I already hard boiled 24 eggs with it even though it said to only put in 12. I just want to make sure and buy the “newest” version.

If it’s optimum mobile control you’re seeking a later model might be best. However, i’ve had horrible experiences buying new model cars, never again. Better to let someone else have the de-bugging experience. Or perhaps buy two so you can still cook while you’re waiting for a replacement.

I see the Coleman 48-can stacker chests growing in popularity as a SV vessel. With its superior insulation it appears to expand the mass of product that can swim with an Anova.

I understand why this is confusing - the item model number indicated on Amazon is different from our site and it’s something they control. Anyway, here’s some clarity:

The serving number really is just to give people an idea of how much they can possibly cook with the APC. It’s not a hard rule. Because really, a serving size can be subjective. Both models of the older APC can handle ~5 gallons of water just fine. However, if you have your water bath insulated and covered, the serving size can be much more than what’s indicated on the site. We have folks using large coolers with no problem - and that’s well over the recommended ~5 gallons/18.9 L. Seems like we have some discrepancies on the serving size on packaging vs. site. I will notify our team.

It would be really terrific if you would indicate in the product listing that v. 4.0 will read v.3.2 on the box. I have no idea why a company would operate like this. As for Serves 8 or Serves 10 or Serves 12 . . . that’s entirely meaningless. I cooked a 9.9# spiral ham yesterday for Thanksgiving dinner as part of a meal for 11 people. There was enough ham to serve 25 people as part of the meal. The night before, I cooked 14 pounds of yams for the same meal, and it would have been enough for 25 people. I can cook 20 NY strip steaks at one time in a 22 qt pan, which could feed 10 really hungry Marines or 40 grandmas. Why not simply state the number of gallons of water circulation per minute?

What really baffles me is the absence of any instuction manual with the packaged unit. The only thing in the box I received was the instructions for pairing with Bluetooth and WiFi. I discovered on my own that the cooker can be disassembled for cleaning, which is critically important for removing mineral deposits on the heating element.

In your future upgrade of the cooker, I would recommend increasing the heating element to 1100 or 1200 watts. At 900 watts, it takes about 90 minutes to raise 20 quarts of 120F water to 185F. My next high temp cook, I will heat the water on my commercial range in 10 minutes then transfer to my sous vide pan. Too much wasted electricity.

I think you’ll find that heating the water on your range top won’t really save you electricity. It will save you time though. Just one of those things when you’re dealing with thermodynamics - it’s going to take the same amount of energy to heat that water, regardless of the source.
The time savings is still nice. I use an electric kettle in conjunction with my Anova when I want to get my water to a high temp quickly (think creme brulee!

This is an aweful practice, why don’t you change your website to acknowledge the model numbers such as #A3.2-120V-US. instead you label it as version 4?? Where do you get the 4? Terrible business practice.

I own a food review web site, and work with nearly 500 chefs / restaurant owners each week. I am considering a review of your Anova Precision Cooker BT/WiFi, but have seen various models online, which is confusing, as your web site does not state an actual model number, except “second generation”, which doesn’t tell me anything. How can I find out which model online is the newest or best available? I’ve seen a couple models listed online on various sites…

I believe I want the BT/WIFI 900+ watt, but want to make sure I get the latest and greatest… Thoughts or recommendations?