I received an e-mail today from Costco informing me that they’ll have USDA Prime boneless ribeyes on sale tomorrow for $15.99/ lb…and there’s a store right next door to my office. Talk me out of it.

I’m kidding, of course. You couldn’t talk me out of that if you were the world’s greatest orator.

Mission accomplished. This package as been sitting in my office’s break room freezer since lunch, and I’m keeping a close eye on my co-workers. 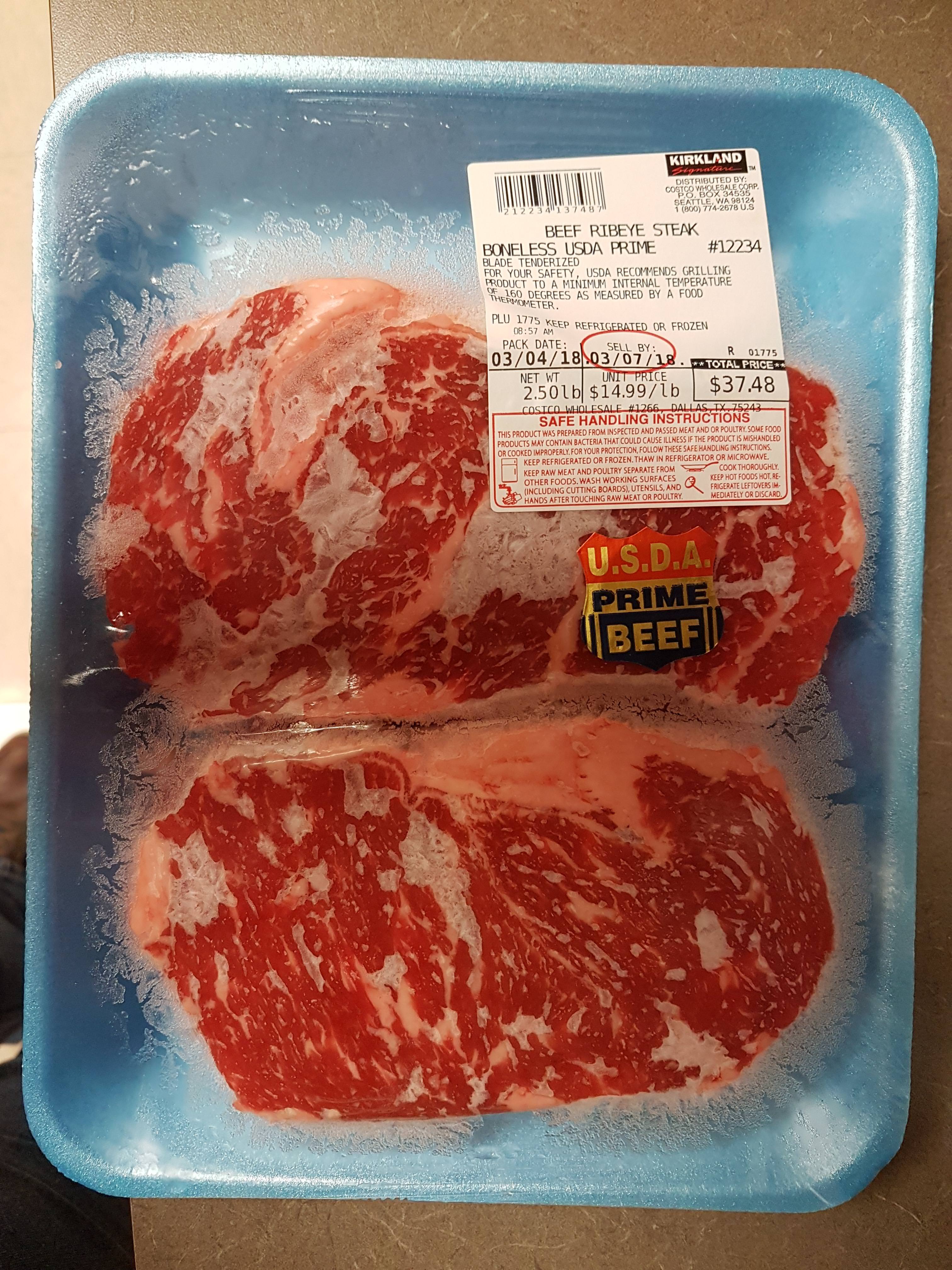 Why in the world Costco blade tenderizes Prime ribeyes is beyond me. Thankfully, SV makes that a non-issue.

If you sign up for emails, you get updates of sales their having. I get them to, though I usually wait for the flyer in the mail.

Yep. As often as I buy large slabs of meat there they should be sending me love letters.

I’m very curious to hear how you made out. I buy Costco ribeyes all the time and once tried their prime version. I honestly couldn’t tell the difference although I didn’t do a side-by-side test. I can’t justify the 80% premium.

I’ll be cooking one of them this weekend, so I’l let you know.

Funny, I did a SV Costco Prime NY Strip last week and it was as good a steak as I have had. Guests agreed.

I use the Tasting Table Sous-Vide Rib Eye recipe and use 134 degrees for 1-1/2 hours, finish in a cast iron pan. Perfect medium-rare for my taste.

Costco in my Portland area has the boneless Rib Eye Prime for $14.99 this week and I will be trying to get 3 steaks medium rare, 1 steak medium and 1 steak well (for guests), with my one Anova cooker.

Any suggestions on how to manage the three doneness for the same sitting easily?

Willpons. As I was told…do them all med rare and then ruin (ur… I mean) proceed to overcook the other 2 in the skillet. Don’t hold up your medium rares during this process. Good luck!

The most common technique I’ve seen recommended is to cook the “most done” steak first, lower temp to the next desired doneness (throw in some ice cubes to get the temp down faster) and then throw in the next batch. The first batch won’t overcook since the water bath is at the lower temp. As for the well-done steak–ask your guest to order something else, especially if you’re cooking prime meat!

Will, you can do as Nestor suggests or look back in the Community list here. In Dec. 2017, i described the technique for serving portions of varying doneness with a single cook. You probably want to produce your meal with the least amount of fussing with it. The solution for your Rib Eye challenge is about the same as i described to Whybuynew 1. Now admittedly it is a somewhat cosmetic solution, but it is an age-old restaurant trick that satisfies guests and continues to be used today.

You can find it using the following address:

I continue to be amazed at how many people attempt to cook expensive cuts of meat without using an instant-read thermometer to achieve consistently exact degrees of doneness. If you don’t have one, please do yourself a favour and get one. It doesn’t have to be a Therma-Pen, the $10 to $15 ones work just fine, - only about a second slower.