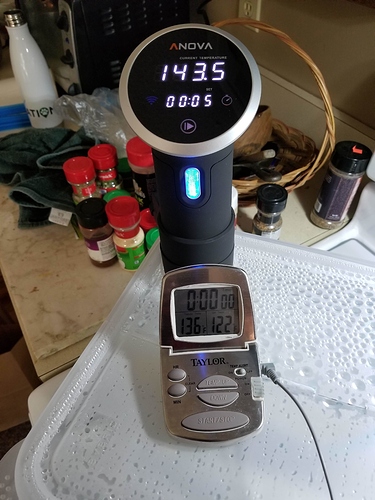 Just picked up my Anova WIFI/BT Sous Vid today. In in the process of my first meal chicken kabobs and some veggies. Just for the heck of it I checked the temperature of the water. This is WAY off. I also checked around the impeller and other areas of the bath. All showed 136~137. While I would like to have a third thermometer to verify I don’t. However, after 45 minutes I pulled the kabobs and checked the temp. They were at 135* not the 143 that it should be. Is this a possible defective unit? I do have in insulation cover for the bath on order for tomorrow. I’ll play around with this again, but temp diffs from heat bleed-off shouldn’t be that different. Should they?

You should not see any difference larger than 2 or 3 degrees. I’d beg, borrow, or steal a thermometer from a neighbour or friend. Pretty much anything will do, such as an old-fashioned glass thermometer, or any of the digital kitchen ones. Or buy a cheap temperature probe for about $5 on eBay.

With that, you should be able to work out whether the outlier is the Anova or your thermometer.

The other test you can do is to fill a container with lots of ice, add some water, then put both your thermometer and the Anova in there. You should read 32º F (0º C) as long as any ice remains in the bath. The same test can be used with boiling water, too, but don’t expect exactly 100ºC unless you are at sea level. You can look up boiling points of water with respect to elevation here: https://www.engineeringtoolbox.com/boiling-points-water-altitude-d_1344.html

Be careful not to scald yourself if you do this!

A post was merged into an existing topic: Rising set temperatures

The new sous vide devices have a lower wattage output, than the original Anova-1. I suspect, that they would have a tougher time maintaining the set temperature, in a large container (5 gl).
My 1000W Anova-1 was rock solid, but my new, 900W device fluctuates a little (+/-1 or 2 degrees F), even though my container is wrapped in insulation.
A 1 or 2 degree F fluctuation is insignificant, but any more than that, assuming an insulated container, is, in my opinion, cause for alarm.