Anybody who has cooked meat sous vide is familiar with “The Juice” … the liquid that accumulates in the bag alongside your yummy steak or perfect pork chop. It looks so enticing, ruby red and full of meaty goodness, you know it’s going to be a delicious addition to your sauce. But it’s not. It curdles and breaks, has a funny boiled-meat flavor, and is generally a huge disappointment.

So what do you do with it? Here’s the best I have come up with.
Step 1. Boil it! Especially with something cooked at low temperatures, this will coagulate the proteins into something we can deal with. Put it in an empty saucepan and bring it to a full boil. Add some water or stock if you have to so it doesn’t boil dry.
Step 2. Strain it. Strain The Juice into a waiting bowl.
Step 3. Brown it. Return the solids from the strainer to your saucepan, add some butter or other fat, and cook until those protein nubbins are dried out, browned and delicious. There – that’s the fond you need to make a proper sauce.
Step 4. Sauce it. As if you had a roasting pan, add your minced shallot, or garlic & ginger, or whatever you usually use. Deglaze with wine or what have you. Add back the strained Juice (and maybe some additional stock) and cook until yummy. Mount with butter if you’re feeling fancy. Strain it again if you have to.

What do you think? Do you have something else to do with The Juice?

@DougL Love this post, thanks for sharing your insight! I love using it to sautée veggies

Meat cooked with a pre-sear tends to exude juices that are darker and seem to undergo some kind of (Maillard?) browning in the bag. You could quite easily add a small splash of wine reduce this to a pan sauce, season with salt and pepper and load with a bit of butter to finish.

I used “the juice” from 72 hour short ribs, to make a BBQ sauce, loosely based on the recipe linked below (just the sauce bit) for the next set of 72 hour ribs I made the following week.

I put it in a fat skimmer and refrigerated it, but I didn’t have any issues and it gave an amazing beefy flavour that the packet stock I used before didn’t get anywhere near.

The skimmed fat made some lovely roasties too! 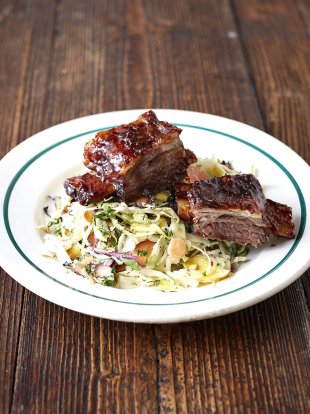 @stoneymatt Did you marinate or prep the first round of 72-hour short ribs with anything before sous vide?

First set were naked in the vacpac, second I put in a touch of seasoning and oil.
didn’t notice a huge amount of difference

Both finished with a searzall, which is a lot of fun

@stoneymatt I think it’s time I get a Searzall…I’ve heard so many great things. Have you done crème brûlée with it?

Yea, definitely worthwhile IMO, I imported mine to the UK too, so it cost a fortune.

No creme brulee yet. Open quiesadillas were nice.
blackened romaine lettuces have been my fave non protein so far.

Saw a great use of the juice and thought I’d pass it along, it looks delicious!

Sautéed mushrooms, deglazed with the juices, reduced with balsamic: https://instagram.com/p/z04D9bpAhg/ from @iamdangavin

Just game across this little gem - similar to @DougL’s great tip for using the juice. It includes photos for the visual learners like myself:

I want to try incorporating steps 2 & 3. So far I have not done that and I think the sauce would benefit.
I like a touch of red wine in my sauce but have have good ones without it.