So I’m curious as to what everyone’s opinion on this. Worth it? Not worth it? Better to use other cooking methods? Pros/cons.

I never noticed the recipe before. I think it’s fantastic. Plus, I can chill all the captured hot dog juice and use it to make dirty martinis.

I totally could be using that word wrong. What is a right way to use it? @acs

A hot dog isn’t really an emulsification. It’s just finely ground and mixed meat. Bologna, liverwurst, snack sticks, hot dogs, these are all typically done on a 2-3mm grinder plate. Meat mush is probably the better description when it comes off the grinder.

Emulsification is what what can be done with liquids that normally won’t mix. Mayonnaise is an emulsification. Cheese sauce, creamy salad dressings, etc…Emulsification can really only happen in liquids.

Got it! I thought the process in which a hot dog goes through could also be considered emulsification. But “meat mush” might just be a better way to describe it.

Got it! I thought the process in which a hot dog goes through could also be considered emulsification

I guess you could but I personally I think calling a hot dog a colloid substance is a bit of a stretch. It’s just a really finely ground and well mixed paste composed of solids. Emulsion is actually normally un mixable liquids being forced into a mix and forming this substance.

BTW - actually do dig the recipe. I tried to SV spam once on a lark. It sucked. This might actually work.

How did the SPAM come out? Since it’s technically cooked + ready to eat, I wonder if sous vide would actually change anything about it. @acs

I try my best to be multiple-choice.

I often cook raw cased sausages SV, then roll them across a hot grill to get a little char and some crisping,. Super juicy. The hot dog is really just a cooked sausage with a bad rap, so why not give it the same treatment.

It really didn’t change the meat component of the spam at all. I don’t suppose the hot dog will change all that much either, being that it too is cooked, but the spam really benefits from frying and crisping in it’s own grease. The SV rendered a bunch of that out and I was left with flat tasting dry spam.

I think it also got tougher, which for spam, was something I would have figured was impossible.

I have not tried hot dogs but I will next time I have some in the house.

What I have tried is Bratwurst and it turns out great. I cook it SV then char it quickly on a hot grill. Turns out very juicy.

I have, on a couple of occasions, made my own sausages, but in a household of only 2 people I find myself giving away a lot of sausages. Next time I’ll plan to experiment with sous vide and freeze. I think I still have the makings of a half batch of hot Italian in the freezer from the last time I was gifted a pork forequarter.

Hot dogs are something I can’t say I’ve ever really been a fan of. But I do intend to try making knuokwurst if I can ever get my hands on some veal.

@Ember have you tried to sous vide hotdogs that are already cooked?

No. I haven’t. But are what you guys use as hot dogs the same as the savaloys and frankfurts that we get? A finely ground homogenized meat bag of questionable content enrobed in a bright red skin?

@ember Hmm, I had to Google search savaloys. They are similar, but it looks like savaloys are probably less processed?

These are how hot dogs look in the US: 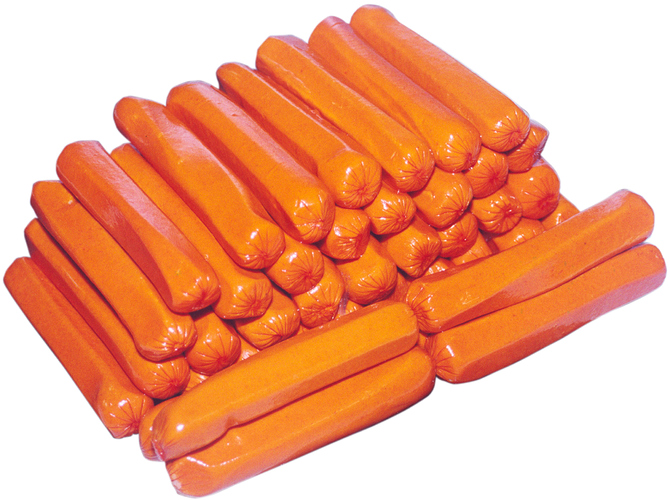 Yeah, they would seem to fit the savaloy/frankfurter profile. Never was able to work out what the difference between the two was supposed to be. Some are smoked, some are not, but they’re all full of mystery.

Mystery in a casing!

Yeah, “frankfurters” is another name for hot dogs here in the US, but it’s mostly depreciated. Not something you hear said much anymore, I’m not even sure you see that many packages with that written on it these days.

Knockwurst is very close to what is packaged as a hot dog in the US. Just no Veal in the hot dog. Mass produced hot dogs typically come in all beef, all chicken or all turkey, pork blend with chicken or turkey and sometimes beef. Oh, and vegan which to me is really comical, as we always see “Vegan ___ tastes just like meat…”. When did you ever see “Lettuce flavored 100% Angus beef patties!”.

Sous vide is another method to use in cooking meals. It is not the " end all " for cooking. There will always be items that are better suited to more conventional methods.
I vary my cooking methods from stove top to counter top convection oven to grill to microwave.
I do love the sous vide method and will continue to use it a lot, but not for everything😜

@berge I totally understand - it’s fun to experiment with everything with sous vide, though haha! Have you tried to sous vide hot dogs?