You know, just to remind myself what I WASN’T missing - two nights ago, I took a “wing steak” and did it the traditional way on my Weber electric BBQ (I’m an apartment dweller - only legal way I can BBQ on my balcony).

Heh. I had forgotten JUST HOW MUCH sous vide produces a much, MUCH more tender result!! I’ve been so spoiled over the last few years. It was an eye opener, just how awfully tough this cut is when you prepare it with conventional equipment. Won’t ever get lazy again, thinking I can take that short-cut and have something that’s enjoyable.

Haha I totally understand this. I don’t eat meat often, so when I do, it’s a treat. And when it’s not perfectly cooked, it’s a big bummer! I’ve never heard of wing steak before, how would you cook this sous vide? Is it a tough cut?

Another lesson learned SD.
They are a nice steak but so much better when treated to a little SV kindness.
It’s one of the reasons why i never order a steak when dining out. I detest expensive disappointments.

Wing steaks are the few first cuts from the short loin next to the rib section. They are similar to a rib steak and the bone-in strip steak, aka NY Strip loin steak which is cut boneless, or the Porterhouse Steaks further astern.

In the Eastern USA they are called Delmonico Steaks after the famed NYC steak house that still specializes in them.

I’m a big fan of adding at least an hour…or even doubling the cook time of a steak (from the thickness guides that are published) to maximize the tenderness without turning it into what appears to be a piece of prime rib roast.

I’ve just had a week touring around the Barossa Valley. It’s an area famous for it’s food as much as its wine. Am I allowed to say I’m looking forward to having perfectly cooked protein again?

Ouch! So I take it even its fame does not equate to “superior to what I get at home”?

Alas, not where I went. Not everyone in foodie central is up with the plan. Next time I will make sure I can afford to try dining at The Cube.

Next time I will make sure I can afford to try dining at The Cube.

I know. I was expecting bits to spin while I was looking at it.

That is one seriously unique building design! Would be a bit too pricey for me to eat there. Seeing as how it’s 8328 miles from my house the cost of plane tickets, hotel accommodations, and a rental car place it firmly beyond my “dine out” budget!

Though I guess I can now add this to my list of excuses to finally visit Australia!

Hahahaha… well. It’s a good 6 hour drive from here. Not sure when it first opened, but the winery it’s a part of has been around for more than a few years. Carpark was packed solid, but I figure that’s because it featured in the current season of Master Chef.

Hmm…I’ll have to read some reviews, see if it’s worth the hype.

Link for the restaurant:

Open for lunch, Thursday to Sunday. Offering degustation dining, with optional wine pairing. Book in for a seat at the Chef’s Table private dining experience.

Hitting India, Thailand, Vietnam and Cambodia on my way there.

How long will you be in Aus? And what’s on the list of visits?

Heh…haven’t mapped it all out yet (open-ended). The plan is to try to get an employer to sponsor me for a work visa and stay - though it sounds like New Zealand would be an easier climate to get a work visa in. I hear they’re pretty hungry for IT people at the moment.

NZ gov is always more reasonable to deal with than Aus gov.

If/when you do get down here I hope you venture off the beaten track a bit. I can recommend eating at the Royal Mail in Dunkeld, Victoria. It has been listed as one of the top 10 restaurants in Australia with the best wine cellar. Gorgeous little town in the foothills of the Grampian (Gariwerd). It’s about 3 hours drive from Melbourne toward the SA border.

It’s one thing to get used to driving on the opposite side of the road, it’s quite another when the controls are reversed.

Makes me wonder…anyone know if controls on motorcycles would be reversed in other former colonies? Clutch lever & shift pedals still on the left?

That may be an option if I’m going for a drive down the coast.

I hear there’s some lovely highways (appreciated that about California as well).

Steven I’m envious! In high school my best friend and I always talked about how someday we’d visit Australia. Then careers and marriage came along for both of us and we’ve never gotten around to it. Now he works for Bell Labs and spends half his time flying all over the Near and Far East - and Europe - and he still hasn’t made it to Australia…so if we go now it’s going to be with the wives. I suppose this removes motorcycles as an option for us, but if I were you a motorcycle would probably be my choice!
Oh - and everything I can find says shifter, clutch, and brakes are located the same for motorcycles everywhere.

The catalyst to this change has been how impossible it seems to be for leaders to find employment here (Ontario, Canada) of late. The definition of insanity being “trying the same thing over and over again, but expecting a different result”.

Well, I’ve had enough of bashing my head into the wall with little positive result. To plagiarize from “A Knight’s Tale” I’m looking to ‘change my stars’. Time for a change of scenery!!

I’m going to blog (likely mostly about food) - one of the other users over in the ketogenic forums insisted that I do a blog…so I though “Meh, why not?” If anyone wants to follow along (they’ll get more entertaining once I land in India on July 23rd - I promise)

I guess I was going to do a post somewhere, where I announced my intentions here.

Guess it may as well be this one. Heh. My sous vide kit is actually for sale. As part of this exercise, I’m actually selling everything. And, yes, I mean EVERYTHING - well, other than what can fit into a couple file-folder-box-sized totes of memorabilia that will be stored at “Second Closet”. Whatever doesn’t sell, is being donated to charity. I’m without a vehicle for the first time since I lived in Boston for a couple of years.

The living room and dining room furniture being the most stubborn to go is causing me some angst. But, as one friend put it “the cost of freedom”

…as I wince every time something that I’ve loved using goes for a ridiculously low price.

Oh…and just so I’m not completely off topic…had to wipe the awful steak memory out of my head…there is actually a small part of another wing steak underneath all of that blue cheese sauce, I swear! 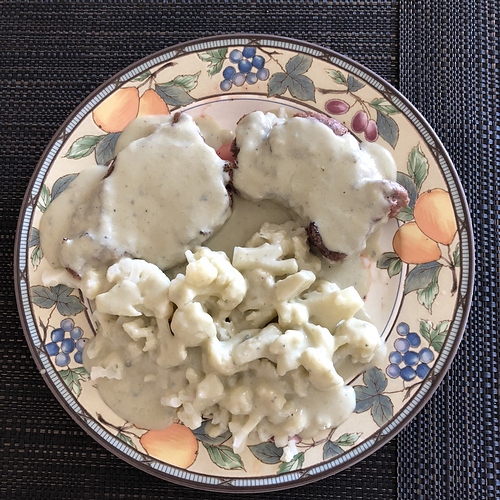 Oh…and one more. I don’t know why I didn’t do scallops in the sous vide earlier. It was one of those “one of these days” things I just never got around to doing. Well, I changed that last Friday…and I almost teared up a little, they were SO mind-blowingly delicious poached in butter (then a quick sear for a little Maillard flavour). OMFG!!!
(absolutely giddy that I still have some in the freezer)

That’s going to be dinner tonight - my bacon, walnut, blue cheese salad with maple vinaigrette along with another bunch of these delectable, sweet morsels!!! 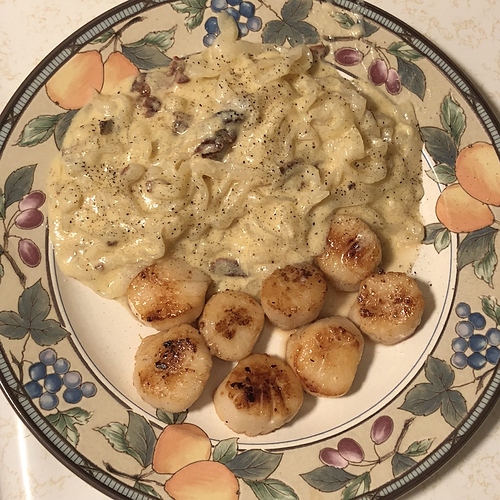 Didn’t have to do that before. With all of that revenue from the Nano’s, maybe you guys can afford a better hosting provider?

Well, I changed that last Friday…and I almost teared up a little, they were SO mind-blowingly delicious poached in butter (then a quick sear for a little Maillard flavour).

Temp and time for the scallops? They do look good!