Hi, I just received my Anova for christmas and has been experimenting with eggs. I bought a 15 Qt container and Anova at maximum length is only half way along the height of the container. I am wondering if the temperature at the bottom and top of the container is the same since I tried the recipe for “Heston’s scrambled eggs” and came out with a runny scrambled eggs different from the picture in the recipe.

You are very brave.
That’s the equivalent of tackling Mt. Everest first when you decide to take up mountain climbing.

Temperature stratification is the least likely cause of your problem in that large a container using Anova.

You probably don’t want any assistance, but i will offer some problem solving thoughts anyway:

How runny are the scrambled eggs?
A lot?
Or do you mean they have separated?
That would indicate undercooked egg whites.

Did you evacuate all the air from the bag before cooking?
Otherwise you will have uneven cooking.

Did you massage the eggs post-cook?

You could have a temperature problem if you have runny eggs right after the cook. Did you cook at the optimum temperature of 77.5C? How long?

Less than fresh eggs will be prone to being runny after cooking. You can rescue your egg mixture from elderly eggs if you gently break each egg into your fine mesh strainer before using. Just do one at a time.

The positioning and circulation of your cooker should not be an issue. If you wish to check it at all, run the unit in the container without anything in it to cook and add a couple of drops of dark/strong food colouring the the water bath at the opposite end. Observe how quickly and thoroughly it mixes in with the rest of the bath. Do this with the APC on it’s initial bath warming and again when the bath is up to temperature. Anywhere that the colour hasn’t reached is likely to be a cold spot. In your case it will be useful if you can observe from the side as well as above.

I would also suggest getting a thermometer and checking the temperature at the base of the bath. I don’t know what material the vessel is, but you could try a surface reading from the outside of it at both the bottom and top of the container at the opposite position to the cooker. This will give a fair indication of how well the Anova is stirring the heat to the bottom of the container. Of course, this won’t work if you’re using an insulated container.

A note about Heston’s eggs. They are a very lose scramble, even when they are right. It’s also worth noting that egg sizes vary greatly. It’s extremely possible that the eggs you used were considerably smaller than those used for the recipe. This would cause a lower egg to dairy ratio and also impact the set.

Hi Zombsta:
Can you indicate which recipe you used, with a link or book reference? I’ve seen a couple recipes that are attributed to Heston Blumenthal, but I can’t find one that uses an immersion circulator. I’d like to check out your recipes.
Thanks

The assumption is that the Heston style recipe in question is this one: 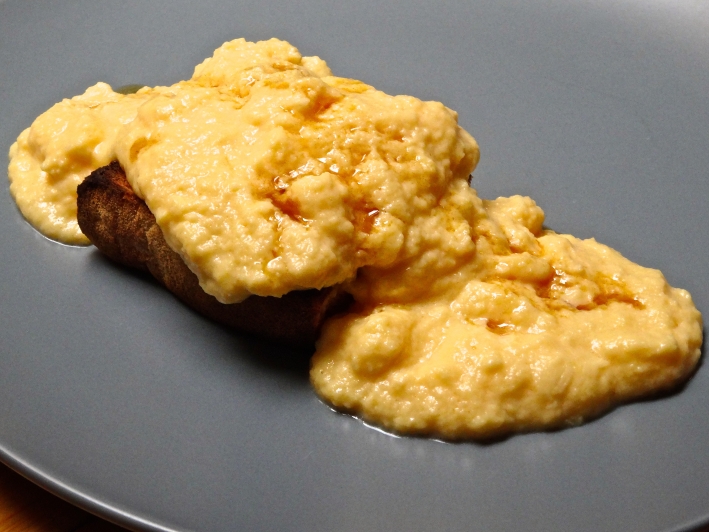 It’s no secret that Heston Blumenthal, the master of molecular gastronomy, is a fan of sous vide cooking. This recipe is inspired by his sous vide scrambled eggs recipe. The eggs are so smooth, light, and creamy that you’ll hardly realize they're...

Hi all, first of all, happy new year to everyone!

@chatnoir thanks. Figured eggs r the cheapest way to screw up than expensive wagyu. They are pretty runny from what im used to having. Yes all the air is evacuated using the ziplock method. I massage them every 5 mins. The scrambled eggs wasnt separated but very wet sort of scrambled eggs.

@ember didnt realise that a lower egg to dairy ratio would affect the outcome. All I did was adding a splash of milk and cream with some butter. Not using precise tablespoon measurement like what the recipe said.

It’s no secret that Heston Blumenthal, the master of molecular gastronomy, is a fan of sous vide cooking. This recipe is inspired by his sous vide scrambled eggs recipe. The eggs are so smooth, light, and creamy that you’ll hardly realize they're...

More egg and less dairy will give you a firmer curd. Less egg and more dairy for a wetter finish.

Much the same thing with a custard for quiche or eggbites. More egg and less dairy for a firmer set. More dairy and less egg for a silkier softer set.