What are some inexpensive cuts that are transformative with sous vide?

And by inexpensive, I don’t necessarily mean poor quality. Something that was super cheap, but was crazy good when cooked sous vide. What was it? How did you cook it (time/temp)?

Good Question!!! One of my first cooks was a chuck roast which is el cheapo and I cooked it at 135F for 29 hours. (recipe on this site) Other than the expected fattiness of the meat it actually tasted more like a rib roast. I had no complaints (once I buried it in my secret horsey sauce and had sous vide glazed carrots with it …)

Try a beef shouder roast. 48 hrs at 130f. It is very lean. After searing, either eat as a roast but the best is slice very thin, against the grain. Makes excellent roast beef sandwiches, a little horseradish. you got it.

does it have to be cold to slice thin? I would think it would shred after 48 hrs but maybe the 130 kept it firm enough to slice. Sounds great anyhoo

Good point, yes, it was put in an ice bath, put in the refrigerator, next day sliced thin. I also, did it for 24 hours and it was OK.

Purely on a flavor to price ratio, there is no better bargain than pork shoulder. You can find it for as low as $1.99/lb, and that’s all meat. Pork shoulder is incredibly flexible when it comes to flavoring and tastes fantastic thanks to it’s high fat and collagen content, which gives it a true porky flavor. Because it is a relatively tough cut that needs a long time to break down, it’s a great match for sous vide.

The only other thing that comes close, IMHO, is chicken thighs. Similar to pork, they’re very inexpensive, highly versatile and taste far better than breasts. Though they can cook pretty quickly on the stove or in the oven, so slow cooking via sous vide is really a choice, rather than a necessity.

In the old days, I would have added short ribs or oxtail in the beef family. But both have become so popular that they are no longer the bargain they once were.

Brisket is pretty cheap where I live and it’s fantastic done Sous Vide (I have one on right now for tomorrow!)

As others have mentioned, chuck steak and chick thighs are very good.

Even more flavourful than chicken thighs are turkey thighs when cooked SV, only longer. If you get large ones you can get nice slices from them too. 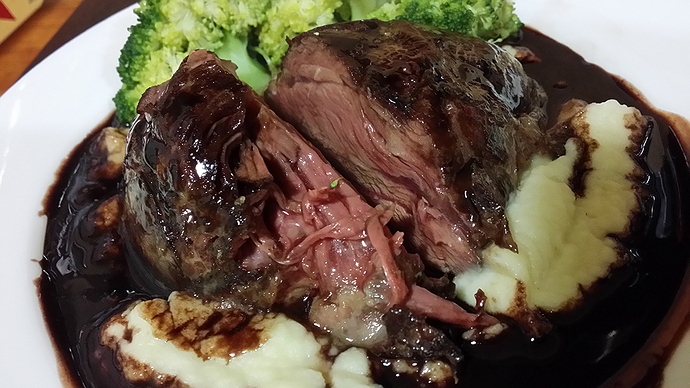 But any hard working muscle is going to be cheaper than the so called ‘prime’ tender (read low work) muscle groups which are in such high demand. They’re also going to give you so much more flavour. And sous vide allows you to perform magic on them by cooking them a low enough temperatures for medium rare and long enough time to get those high collagen, hardworking muscles beautifully tender.

I second this. I never enjoyed turkey thighs before SV and they’re cheaper than chicken thighs at the growers market.

Are beef cheeks more common in Austrailia? I haven’t seen any at the butcher, but I probably have to ask. Maybe it’s not on display. Every time I see that pic, I salivate.

Oh yeah, turkey thighs are pretty inexpensive cut. I’ve never been a huge fan of turkey thighs, but I can’t say I don’t like them until I try it out sous vide. What time and temperature do you usually go for?

You’ll most likely have to ask, much like you do for tail or tongue. My mum was an old fashioned country cook, so we grew up on secondary cuts. Now they’ve become popular among the gourmet crew due to the prevalence of competitive cooking shows.

Alyssa, i have to add that if you can find pastured turkeys they have an exceptional flavour.

If i’m up for a few hour’s drive a couple of counties over i can get the genuine thing. These turkeys’ thighs are like those on championship class heavy-weight Olympic power lifters, simply massive, and so thoroughly delicious. Last meal class for sure.

You might have luck finding them in a Farmer’s Market too. That’s where i discovered them. However, they are scarce in the market so now i just phone ahead and take a drive to get them.

A Ham or a corned or fresh beef brisket.
Soak them in fresh water first, to remove the excess salt.