Eggnog and cocktails, lots of them! I recorded my findings here: Sous vide cocktails

Hi @Merwin. For a small 8 bone rack I used a little rosemary, salt and pepper in the bag. Cooked it for 90mins at 132F. Finished with a little more salt on the fat before it hit a hot cast iron skillet to caramelize and render…

Hi Ember - that sounds very easy. Thanks for the info! I am very excited to give it a try. 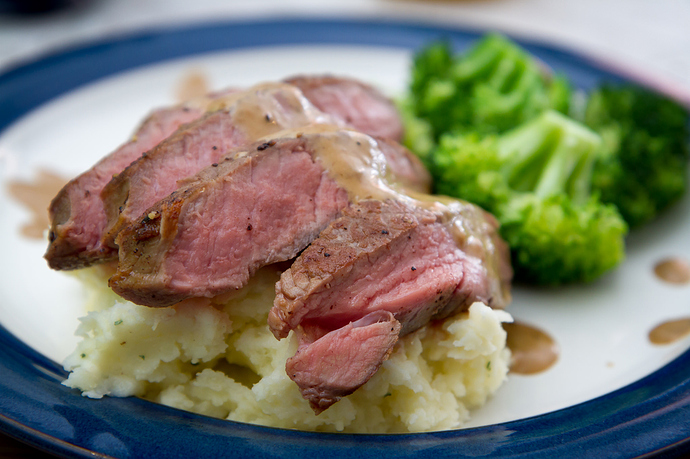 Got my Precision Cooker for Christsmas and first cook was a bit of a guess. Had a 1 1/2" boneless ribeye for one guest who didn’t want boiled fresh lobster (her loss). Cooked at 129 F for 1 hour, seared after cook. It was perfectly done. Rare/med-rare, juicy, great texture (I had to have a bite). Good news is about half was left for the next day which I reheated in the APC for 45 min and it was fantastic.

Meal three (really enjoying the APC experience) was a frozen wild pheasant that I had in the freezer longer than I would have preferred. Cooked at 140 for 1 hour. The breast was a little dry but still tender and very flavorfull. The legs and theighs were perfect!
Can’t wait to try more recipes and expand the things I have cooked.

We were visiting in Seattle over Christmas and my daughter’s boyfriend used an Anova to cook up several steaks. I was so impressed that I ordered one and it was waiting on me when I got home. This was my first try- 2” steak, medium rare, pan seared in grapeseed oil and butter. This thing is going to get a lot of use! 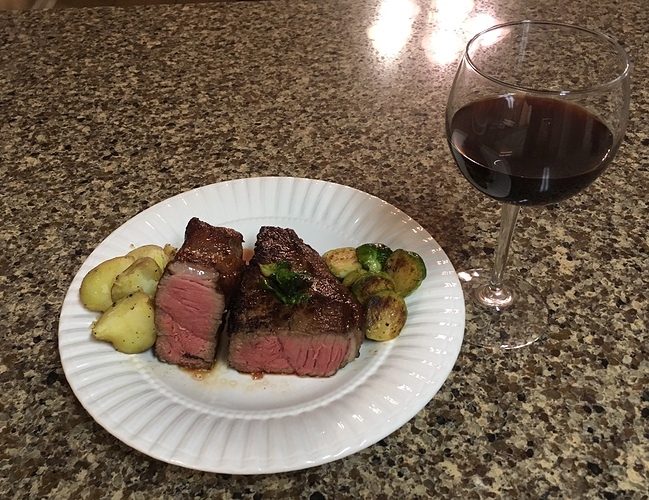 My Anova arrived today. I thought I would start off with something simple so I started with pork loin chops.

I seared the first one on medium heat and I think it took a few minutes to brown and came out a bit dry but still better than any other chop I’ve had.
Second one I jacked the heat to max and got quite a bit of smoke which I was a little worried about however it seared in under a minute. Turned out much better than the first. So moist. 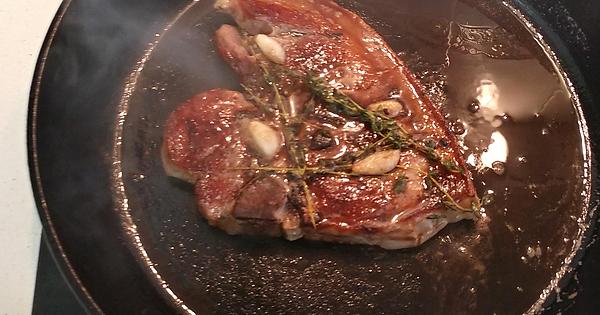 I also tried poaching some eggs for 14min @ 167 after. Is it normal for a little bit of egg white remain in the shell when extracting? I managed to get the poached egg out in one piece but there was about 4mm of egg white still stuck to the shell. Is that normal?

Two things that I have found impact the timing of eggs. The first is egg size. All the recipes I have seen want you to use Large eggs (US grading) and the other is age of the egg. I get eggs from a farm and they are huge compared to those seen in the store. They are ones that don’t meet the standards fro normal sale. I get quite a few with double yolks. Experiment a little bit.

Got my APC in Jan, and finally got to use it early Feb. The first things we cooked in it were:

Next step is some egg cups - got some balls mason jars to try these out. And of course I need to build a frankencooler.

I have never fancied chicken breasts my entire life and now I preferred it to thighs/drumsticks!!
140F for about an hour and you’re good to go. Skin on won’t matter much though, you can discard it after cooking. I find it gives a better taste to the meat

Just got my Anova last weekend and decided to try some moose I purchased from a friend not too long ago. Had a nice sirloin and seasoned it with salt, black pepper and rosmary. Vacuum sealed the meat and tossed it in the water. I used 55.5 C temperature for 2 h. Made a finishing touch for the sirloin with hot cast iron pan with some butter and oil. Served the moose with oven baked potatoes and some sour cream + natural youghurt with garlic, rosemary, honey, mustard, black pepper and salt. I was really satisfied with the result and can´t hardly wait for the next time I get to cook!

My first meal was very simple. A recipe of the spanish chef Joan Roca. Egg at 65*C. Cooked in the shell for around 70-80 minutes.
I highly recomend this book: Sous Vide Cooking (La cocina al vacio) Joan Roca and Salvador Brugues, if you want to understand this cooking technic.

My first meal was tenderloin steak (that’s as best as I can remember the name of the cut I bought, lol). Went medium-rare, left it in there for about an hour and 15 minutes, served with baked potato and grilled asparagus.

The steak though, perhaps the best piece of meat I’ve ever cooked in my life. REALLY looking forward to this new take on cooking. I’m pretty sure that I’ll use this every time I will make any kind of meat. 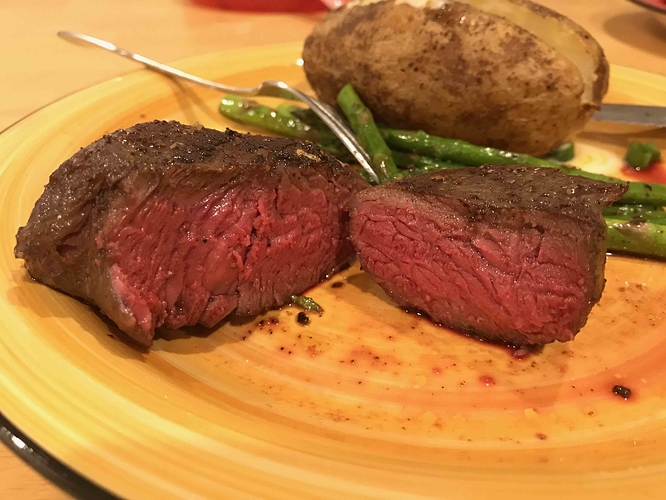 Boneless fresh chicken breast was my first SV yesterday. I cooked at 60 degree Celsius for 2 hours. Then pan fried at high heat for 20 seconds to give it a slight browning. Result was not so bad but i find it still there is room for improvement as I want it to be more juicier.

@easterntigerboo nice! I love chicken breast sous vide. Maybe try playing around with time and temperatures. Lots of recipes on the site call for 65.6C for 1 hour. Here’s some:

great alyssa. i shall attempt it one more time.

Yes! Let me know how that goes! @easterntigerboo

The first thing I cooked was sous vide chicken breast with thyme, lemon, and garlic. I think I shouldn’t have kept it in the ziplock bag with all the flavoring ingredients because it developed bitter flavors after a few days.

Alyssa,
just curious, can we upload picture(s) to the posting? how?