I do chicken with ginger and garlic paste (sometimes with fresh parsley if I have any), vacuum sealed and refrigerated overnight before cooking. I make 2 on Sunday for work lunches during the week, sliced with leafy salad and dijon mustard rolled tightly into a wholemeal wrap. Gourmet quality lunches for less money than a skanky takeaway? Yes please!

@raa59 They look delicious. How was the texture?

I recommend checking out our easy recipes for beginners if you are unsure! Easy Recipes for Beginners

Epic fail. Lettuce doesn’t like to be cooked SV. Whoda thunk it?

Pork tenderloin. Done to 140 with a sear in cast iron after. Very juicy and tasty.

As a previous restaurateur (Hawaii), I was familiar with the Sous Vide concepts but never tried; too costly to play with at the time. Then my son ( an avid foodie) told me about the Anova Precision product.

My first meal was a Ribeye steak, 130F for 7 hours, then seared in a HOT cast iron skillet (blackening temp). I was hooked. At first I used ziplock bags and cooked a lot of prime-cut meats…along with pork tenderloins, lamb chops, fish, etc. Then I had to take an extended trip to the mainland and purchased two more devices to send to family and a friend I would be staying with. I’m always expected to cook and teach when visiting. My friend had a FoodSaver system so I tried it; I’m hooked, again.

It is too late to keep this short, as I have a lot of enthusiasm, and now quite a bit of experience, so I will end this by just saying you gotta try doing a whole turkey…I’m on my third since Thanksgiving and cannot now imagine letting a month go by without a succulent turkey. I will begin a new thread and post more.
Mahalo,
Thames

My first sous-vide dish (with a different brand of SV-equipment) was a tuna-steak. It turned out to be very disappointing. I didn’t really know how to adjust the time accounting for my piece of tuna coming right out of the freezer, so I left it in the water bath waaaaay too long. It still tasted nice, but was far from “mind-blowing”.

The second try was a chicken breast, lightly seasoned with just a bit of salt, pepper, rosemary and paprika powder --> now this was mind-blowing and in my opinion is a very good dish to try for a first time.

First try for us yesterday (it was a xmas present after all!) was a 780g piece of Wild Boar. Cooked at 57 degrees C for 2 hours and was one of the nicest pieces of meat I’ve ever eaten. Tender, full of flavour, moist. Absolutely lovely. A good start to a new method for us.

If anyone has pictures, I would love to see them!

Tried out my new (Christmas gift) cooker this morning by cooking a poached egg.It turned out the best poached egg I’ve ever cooked and possibly the best one I’ve ever eaten. 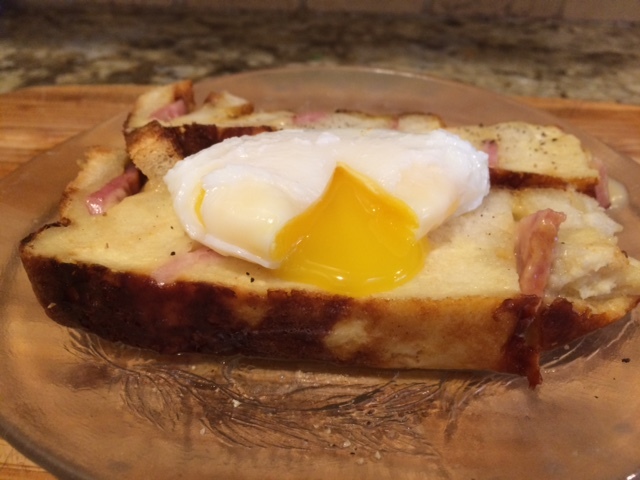 Day one: carrots with a bit of butter, sugar and salt. Reduced the bag liquid as a glaze when the carrots were done. Could have been a bit softer, but so very tasty.

Day two: prime rib, rubbed with salt, pepper and garlic powder… into the oven with a paste of roasted garlic, rosemary and thyme at 450F for five minutes. Omygod.

4hr cook of Angus Ribeye… by the time I though of taking a photo, everyone had already finished. Was great. Can’t wait to pick what’s for tomorrow

Hi folks. I bought myself an ANova cooker with the Black Friday sale. It was intended to be a Xmas present to myself, but became a New Year one instead.

I’d had some experience with a cheap ‘slow cooker’ style of sous vide bath but was never happy with its inaccuracies. My first sous vide cook was a small lamb rack for two, which was absolutely brilliant and convinced me that I’d like to upgrade at some stage. Subsequent attempts were not so successful. An upgrade became more urgent.

So, when my APC finally arrived, I had to go for a lamb rack again. The accuracy of the device is amazing. Superb outcome.

Hi All, The first thing I cooked was poached eggs. I did’t keep it in long enough. The yolks were perfect, but the white part was completely runny. So I moved on to a pork brisket. I seasoned it with a mixture of fresh rosemary, maple syrup, salt and pepper. I cooked it at 157 degrees for 35 hours. When the meat was done I let it cool for about 30 minutes, took the meat out and drained off the liquid. In a pan I seared all the sides (about 2 minutes). The end piece of the meat was falling apart, tender and juicy. I put it on a a cutting board and tented it while I cooked some apple, red onion and sprig of rosemary. I added the meat juices, chicken broth and apple cidar vinegar after the apples and onion were browned. I cooked the juices down until they were almost gone and the apples were tender. I went back to the pork brisket and when i cut into it to serve the end piece was still tender, but the rest of the brisket was dry. :-(. What happened? I thought you couldn’t over cook the meat? That is why this was such a wonderful method? I would appreciate any input as to why it turned out dry. :-). I am now attempting a couple boneless skinless chicken breasts. I will NOT be deterred! Hahahaha…

Hi Ember, I am dying to try a rack of lamb. Can you give me your recipe? Temp you used and amount of time you cooked it?

I did the saffron pears first. Came out fine. Then did a strip steak (perfect result) and followed with a bunch of eggs in the same water.

@Merwin- I would say the temp was too high. I’ve done multiple pork tenderloin @ 135 for 36+ hours with wonderful results

Thanks Thames - I will try it at a lower temp and see what happens!