I have cooked many steaks to medium rare then quickly seared them. These turn out pretty well but I would like to get a better sear.
I want to end up at medium rare. Here is my idea. Follow the time and temperature for a rare steak, remove it from the bag and dry it off. Season and sear longer than normal in a hot pan and finish by basting with butter and rosemary.
My idea is not to rush the sear and let the extra time take it from rare to medium rare.
Has anyone tried this?

I have always worried about the searing overcooking my meat and it dawned on me that this might be a solution.

I think for thinner steaks it could work, but the result will be a bit more traditional (a gradient of more well done on the exterior).

For thicker steaks I think you won’t be happy with the result - I think you’ll have a rare core.

I think what we really need is a brief, insanely intense sear (we need one of the propane BBQ companies to make a small, powerful searing station designed for use inside, under your range hood!)

Funny you ask, I just tried something similar recently.

Tried a 1" thick, aggressively pre-seared it, because hey, it’s cold, I can go to town on this without jacking up the inside, then about 8 hours @ 127F, and finally, seared it again for the normal time. This ended up much closer to what I was looking for, but I think that the two things were independent of each other. The cook temp was responsible for the center being what I was after, that being just on the edge of rare to med-rare, and the re-crisping of the existing heavy sear gave the final outer texture that I was looking for.

I think I might try the latter again, but even more extreme, start with frozen steak, that way the sear only penetrates/cooks a few mm deep.

I was toying with the idea of flambé, but then read that it’s only about 500F with alcohol - not hot enough to be better than a torch / cast iron pan combination. (might be interesting to try finishing off ribs though).

Maybe we need to do the ice bath thing - take it from the sous vide directly to an ice bath for about 10-15 minutes to get the outside 1/4" chilled, then quickly dry off and then sear?

Flambe, while not searingly hot, does bring a host of unique flavors to the party.

Short of a a counter top salamander, I’m not sure what is going to to achieve the desired results with minimal effort in a single pass.

You know, I’ve tended to use my almond oil (as it’s nice and light - virtually no flavour), but looking at this chart: 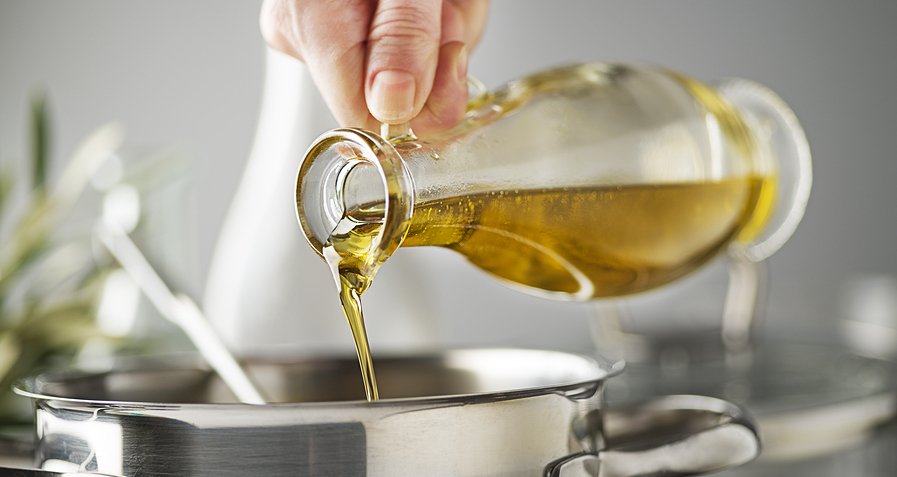 Looking for the Healthiest Cooking Oil? You want to cook with an oil that has a high flash point but that has a healthy balance of Omega 3 to Omega 6 fatty acids. Here's a chart that...

…I’m thinking I should really try using my avocado oil instead. (Usually get the cast iron pan as blistering hot as possible, then add the oil and drop in the butter for better char just before the steak).

But, if I can get the avocado oil heated to its smoke point, it should provide a better sear.

I’ve used avocado oil before, the stuff is amazing. Expensive, but amazing.

It might actually get you what you are looking for.

Good ideas. I want to try searing a frozen steak then doing a post cook sear.

Just use a blow torch! I suggest a propane Bernzomatic with a trigger start. It should only cost you ~$45 for the head and a small propane cylinder and it will sear the outside without cooking the inside. Check out some youtube videos to see how it is done, but it’s pretty simple. Make sure the flame is short and blue, as this ensure it is completely burning all the gas so you won’t get a weird smell on your food.

Keep the area well ventilated and have a fire extinguisher handy!

You forgot about the Searzall (so you don’t actually make your steak taste like propane?)

Also does a more even job.
Pretty sure both John and ACS are familiar with that as well.

Have you thought about trying a charcoal chimney starter? A quick google of “Steak on Chimney Starter” shows a lot of impressed folks. I used the coals after they were poured into the grill, but I may try it over the chimney next time. My biggest problem is that I like my steak on the rare side, while my husband prefers his WELL Done. Before the APC, I put my steak in the freezer and brought his to room temperature before putting them on the grill.

I’ve put a grate directly on top of a chimney starter that is going full tilt before. Works quite well and I’ve measured grate temps around 1200F when I fire it with mesquite lump.