Video: The Secret to the Perfect Sear

After talking to a lot of you a new customers, I decided to make a few videos to help people have an amazing first cook by answering some of the most common questions when people first start.

So here is quick video of how to get that perfect sear on your first steak.

Hope it helps and if you have anything else you would like a little video on, please let me know!

Check out these other helpful videos!

Nice video, should be helpful to those new to the method.

Another good way to get a sear and some additional flavor is fill a webber charcoal chimney with mesquite lump charcoal (like Lazzari) and get it going so that everything is blazing away. Put your grill grate right on top of the chimney and sear on the grate. Only takes about 20 seconds per side, 1 minute would give you a well done steak.

That sounds amazing! I haven’t tried that yet…definitely in the books for the future.

and yes, I know, it’s embarrassing

Also want to toss the Searzall out there. I have a Searzall hooked up to a Bernzomatic TS8000 (on propane, MAP will damage the screens) and while it’s not the fastest way to sear, the results are unmatched for larger, roast sized pieces and more delicate foods like fish or chicken breast. It sears without cooking the food as much as cast iron would - something important for keeping a desirable texture in delicate proteins. It also has many kitchen uses beyond that of sous vide.

+1 for the Searzall. (though it’s too large to fit into my mason jars for creme brûlée)

Charcoal is amazing for flavour. (seems a lot of trouble just for a sear though - if you have access to a charcoal grill - why not do the entire cook of the steak on the charcoal to maximize that flavour?)

I’ve been wondering why none of the BBQ makers hasn’t yet thought to do a standalone searing station (propane powered) for apartment use. Something small enough to fit on our range tops (under the standard hoods). Many propane BBQ’s have these instead of a side burner now.

Charcoal is amazing for flavour. (seems a lot of trouble just for a sear though - if you have access to a charcoal grill - why not do the entire cook of the steak on the charcoal to maximize that flavour?)

With the SV, you can get a consistent edge to edge doneness and eliminate that bulls-eye effect. I could never cook a 2" ribeye the way I wanted it with just a grill. Also good for roasts when your grillspace is limited, I’ve used the SV cooker in an ice chest to cook six 2.5 lb average tri-tips and finished them 2-3 at a time on the small grill available to me at the location since hauling my big Santa Maria grill down there wasn’t an option.

Sure, for a 1" steak, it probably doesn’t matter that much.

I’ve seen portable sear stations. Just can’t remember where. Blackstone has a small tabletop griddle that could be used as a sear station. Never used it though, so I can’t say anything other than that I’m very happy with the 36" Blackstone griddle that I have.

Yep - could see that - the charcoal heat not being near to what a top tier propane grill can do. (but, as you’ve said, with thicker cuts, nothing can really match what SV can do - hence why the best steak houses have been using it for years).

That 36" Blackstone is quite the piece of equipment - Wow!

Their 17" one has 12,000 BTU’s, so likely more than enough to act as a searing station, but they also state it’s only for outdoor use? (ideally, you want one that’s for use on the range top).

I have no idea what a high end propane sear station temps look like, but but when you have all of the coals burning in a chimney, the temps get pretty high. It’s like a forge at that point. Mesquite lump, which is what I recommended, I’ve measured around 1100-1200F at the grate. The surface temp of the mesquite is probably around 2k. Briquettes run around 800-900F at the grate. When you spread them out in a grill, then the temp drops.

The 36" is nice. Avoid the 28", it’s not well designed. Uses round burners, so it has two large hot spots and doesn’t heat evenly.

So far, I’ve been trying to get the sear crispy and avoid banding. I’m cooking at 135 and then doing a mix of cast iron and torch (TS8000). It’s still not a crispy as I want. Should I try putting cast iron in stove to get hotter? Will searzall help? Right now, I have been cooking 2" angus grass fed sirloins.

It’s also interesting that video cooking below 130. I feel like mine has same look at 135. 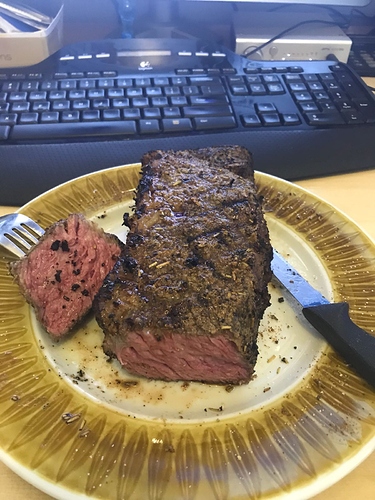 When you sear in the cast iron, what kind of oil are you using? You’ll want something with a very high smoke point. Some of those oils include rice bran oil, peanut oil, and safflower oil. Also, are you letting your oil in the pan get VERY hot before adding the meat? You’ll also want to make sure you pat the meat dry prior to searing. I am not sure about putting the cast iron in an oven since I’ve haven’t done that, but maybe someone else can hop in on this!

Heating the cast iron super hot without having your oil in it really isn’t advisable (you can get it CONSIDERABLY hotter than the smoke point of your oil). Then when you add your oil, boom, either a LOT of smoke or a fire. Heh. Trust me - I’ve done it (with avocado oil).

Luckily didn’t catch on fire, but I was quick to get as much out of the pan as quickly as I could.

But…crispy? If you want some sort of a crust on your steak, then you need to add something else to it (I’ve heard people enjoy doing mayo crusts on their sear).

Oh yeah, the mayo thing can work. I’ve done a sear with mayo with chicken, and I got a crust from it. It’s worth a try.

A while ago I saw a video on Youtube where Adam Savage (from Mythbusters) tested several methods of searing to find how best to sear a steak. Using a chimney starter ended up being an inexpensive method of getting a good sear! I’ll be searing a couple steaks on mine in about an hour.

As for oils and smoke points - here’s a link to a list:
http://www.cookingforengineers.com/article/50/Smoke-Points-of-Various-Fats

I definitely need to try the inverted chimney technique! Thanks!

I also use the Avocado oil when I sear using cast iron - outside on the portable induction burner! ( My wife has me evicted from the interior of the house when it’s searing time!

I was a little surprised that Kenji was saying that 123F was the perfect medium rare??? Their own temperature guide (that he publishes) states otherwise. Edit: ah…then he waffled on the level of doneness a few seconds later. sigh The whole point of doing sous vide is PRECISION Kenji! GRRR!
I think they need to be a little more consistent with people cooking below 130F - and cautioning them that cooks over 2 hours at those temperature (especially below 127F) are really not a good idea!!! 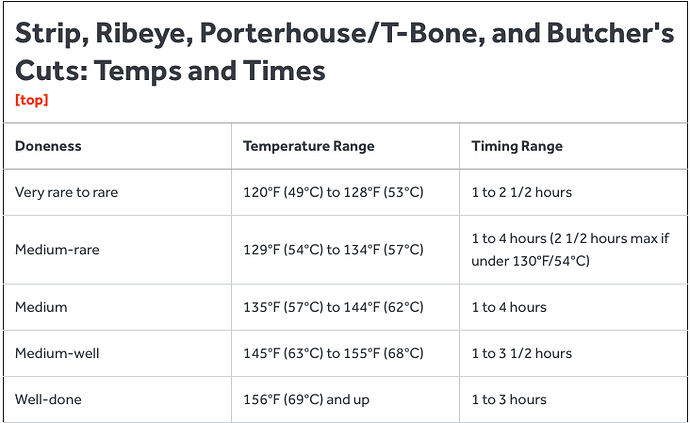