I logged a support ticket, but wanted to get some feedback here, I didn’t have this issue when I first used the oven, but now it’s happening almost every time and it’s very frustrating. I’m in the U.S. , place was built in 2000, everything is 15A or above - I’ve tried just about every outlet in my kitchen now, would rather avoid getting an electrician, so looking for assistance.

Basically what’s happening is that in sous vide mode, or oven, if I keep the door open longer than a few seconds, the oven will immediately shut off. This messes up the app and puts you in scramble mode hoping you haven’t ruined your food.

After I unplug and plug back in, it will usually function appropriately. Strange enough after I cannot reproduce even if I keep the oven open longer than 10-20 seconds - there’s something about adding the food/plate maybe causing issues.

Today making chicken 101 I was pretty quick putting in the chicken and probe, but had the issue taking the food out.

Hopefully something that can be fixed with software again? Anyone else having the issue?

What I would do if I was trying to sort this out is disconnect the oven from Wifi and use only the oven controls. This just to eliminate network activity as a contributor.

Do you have to unplug to recover?

Is your breaker an AFCI/GFCI?

Any chance you are bumping the off button? I find it sensitive.

Any chance you are bumping the off button? I find it sensitive.

I don’t think I am, if I try to power back on right away it instantly shuts off, I have to unplug to recover.

The network idea is worth a shot, I can give it a try, seems odd that would be a contributing factor, though - what is your thought process there?

How can I tell about the AFCI/GFCI? Here’s a pic of the breaker box.
Thank you! 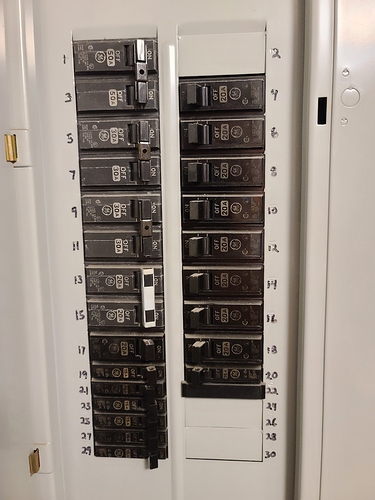 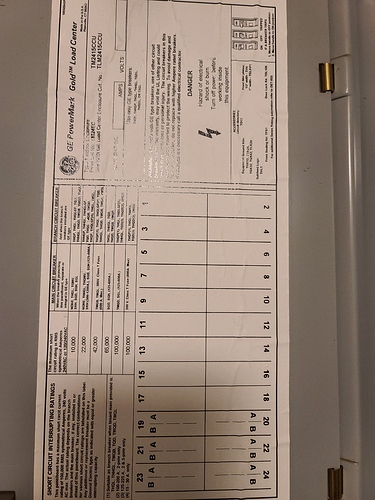 That’s unusual. Pretty rare not to have breakers labelled like Master, KItchen, Dishwasher etc. You have standard breakers. Not AFCI/GFCI. That means you probably have GFCI outlets in the kitchen. You might want to find the one that controls the outlet you have the oven on and simply test it from the button on the face. If you have a GFCI tester you can try that also at the oven outlet.

Do think the oven is getting too hot? What temps are you using when you are seeing this problem? There may be a resettable thermal switch on the oven. It’s possible its turning the oven off and power cycling is resetting. Maybe there is an internal safety switch of some other kind.

The thinking with the networking is simply to reduce complexity to help narrow down the issue. The networking can operate the oven. The firmware has to maintain the networking. It’s possible that turning off the wifi connection reduces the complexity of the oven operations. Maybe your apple watch or phone in close proximity is causing the OS to manage the networking connection and causing a memory problem… who knows.

Is there a correlation with the specific pan? What kind of pan?

Do you have any magnets near the door or on a thermapen?

Ah sorry I do have that list, I will attach below.

Only thing I can think of is that the sudden drop in temp, the oven is trying to compensate and triggering something, like a safety you mention.

I can grab a GFCI tester, those prices seem reasonable. I have tried at least 6 different outlets in different locations in the kitchen. I have the oven in a good spot now, would prefer not to move it, but could I guess if needed.

I’m using the pan the oven comes with.

I will try without networking. 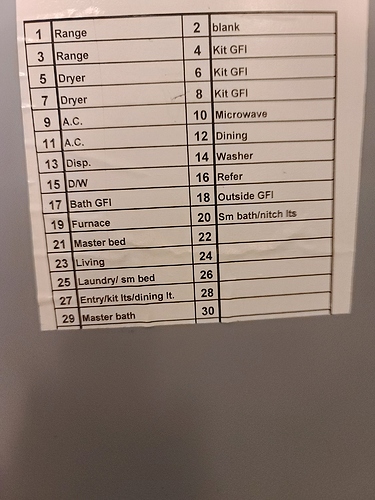 Do you know which GFCI controls the outlet that the own is on? It can be across the room if it isn’t the one the oven is plugged into. Do you know what these look like?

Oh, the pan that came with the oven is a sore topic. It’s slightly magnetic.

You have had the oven turn off when its at 163F?

Do you know which GFCI controls the outlet that the own is on? It can be across the room if it isn’t the one the oven is plugged into. Do you know what these look like?

Those are the outlets with Test/reset right? I do have some outlets like that. I hit the test and reset button on the outlet and the oven actually turned off, it eventually came back on. It isn’t plugged into that outlet directly, but close - the one with the buttons is really not in the best place.

Yep 163F, it just happened earlier today, when I first got the oven and did the same cook a few times I never had the issue, so I’m really puzzled by this…

I ordered some new pans and will try those when they arrive.

Those are the outlets with Test/reset right? I do have some outlets like that. I hit the test and reset button on the outlet and the oven actually turned off, it eventually came back on. It isn’t plugged into that outlet directly, but close - the one with the buttons is really not in the best place.

What else shut off when you pushed the test button? Anything?

GFCI outlets can protect other outlets down circuit. That’s what’s happening with the outlet you have the oven plugged into. So the test turns off the oven and the reset turns it back on? That would be working correctly.

When you have it on 163F is that full steam and which burner configuration? Back only?

When you have it on 163F is that full steam and which burner configuration? Back only?

Yep, 163F, back only. Happened yesterday when I had back 482F and top as well (no steam, no sous vide) - same exact situation, opened oven to flip food, and it cut off.

What else shut off when you pushed the test button? Anything?

Nothing that’s actively connected or running at the moment I’m noticing.

So the test turns off the oven and the reset turns it back on?

I’d open a ticket and work on making it repeatable. That’s no good. I saw another reference or maybe two where the oven was powering off with top and bottom burners. The door opening and turning it off is interesting and with the low temp I’m guessing not a temp breaker. Could be the door opening toggles steam control somehow. and that is causing a problem.

I haven’t had this kind of problem yet. So far I only have water in the glass and the flickering light problem everyone is reporting.

thanks jumpjump, I logged a ticket so I’ll keep everyone posted. I’ll keep playing with it, seems pretty consistent now, only thing I can’t figure out is why it does it once, I’m just scared it’s messing up all my cooks.

Turning off would make me concerned for the electrical. But since it’s not tripping your breaker or GFCI it’s likely not shorting or doing something serious. I guess you would know if it messed up your cook if it’s off. Doesn’t sound like it turns off with the door closed. Maybe don’t cook Wagyu Tomahawks until you get it sorted

Heard back from support, they want me to provide a video which is fine, go figure it worked today without issue making grilled cheese rear and top at 482F. Will keep trying daily, I’ll also post the video here…

I’m having a similar issue where using the oven in steam mode causes it to shut down spontaneously then power back on a few minutes later. The outlet is working fine and no breakers are tripping. It works fine as long as I don’t use steam. The door doesn’t seem to be trigger, so not sure why it’s occurring.