I had four pounds of chicken gizzards in the cooler in two bags cooked for 24 hours at 145F/63C. The seasoning was Mezzetta garlic and parmesan spread and Heinz 57 sauce. I reheated one of the bags in a hot pan then removed the gizzards, added some sriracha and corn starch to make a gravy. 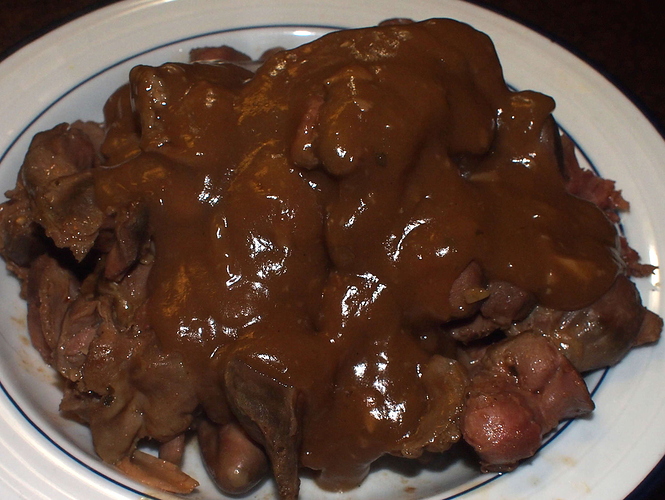 The gizzards still had some texture but were not at all tough. The gravy had a wonderful, slightly sweet, slightly hot flavor. Very nice.

Nice! Also, I had no idea how easy it can be to make gravy! I gotta try that out.

Corn starch or flour gravy is easy as long as you mix it with cold water first, don’t add too much to the hot liquid at a time and stir like crazy.

I prefer the texture of a gravy starting from a roue, rather than a cornstarch gravy, which is also easy, but a wire whisk is a must.

I’m usually just making it for two in a small saucepan, so I start with melting 2 tablespoons butter, whisk in 2 tablespoons flour, and let it cook for a couple of minutes until nice and bubbly.

Add one cup of chicken or beef stock, 1/4 cup at a time, whisking well between each 1/4 cup. Season to taste with salt and pepper. Sometimes I change up the flavor with a dash of wine or sherry.

G
ravy from a roux is the only way to go. I don’t even measure anymore. Some oil and some flour to make a bubbly paste, brown and add liquid. Wisk like a wild man!