Need some help. I want to cook a 5lb shank part ham and a 4lb butt part ham at same time. They are both pre cooked, basically just need to heat up. What temp and time would be best. Want to impress guest with my Anova.

If you leave them in the manufacturer cryobags, make sure you remove all of the stickers beforehand, or you risk jamming the pump impeller with paper when they start dissolving and peeling off.

Thanks a bunch for the reply. Serious Eats site said 140 for a 5lb ham for 3-5 hrs. You advice sounds right on target.
Thanks

I never knew their recommendations until you mentioned them but it’s possible they could be right. It’s also possible they are overshooting for the purpose of playing it safe. Can’t really blame them if that is the case.

The other is a margin of error, USDA says that cured, pre-cooked ham is ready at 120F internal. I feel that 4% at 125F is fine, especially for something that is cured with nitrates and salt, then cooked and finally vacuum bagged in a controlled environment. 140F is very safe, but I think it might dry it out. I’ve reheated cured, smoked pork chops with the SV before and I found that the lower the temp I use, the better. 145F killed them. Of course chops are a less moist cut than a ham (hind leg) but I still think that the lower the better in this case. After all, since it’s already cooked, all you are really looking to do is heat it up to where it is appetizing to eat.

Thanks so much for replying to to my post. Cooked both hams at 125 for two hours and they were great. Glad I found this site.
Bruce 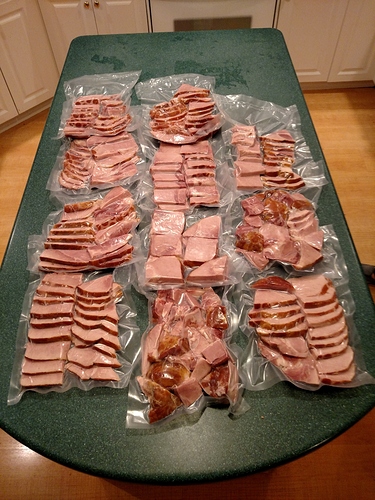 These are three precooked spriral cut hams bagged for serving at a funeral. 145°F for a re-warning/serving temperature. I only opened the bags I needed. Worked out great. No waste. The heating temperature was a little higher since the ham begins to cool down quickly.

One of two water oven containers to keep it hot for serving., 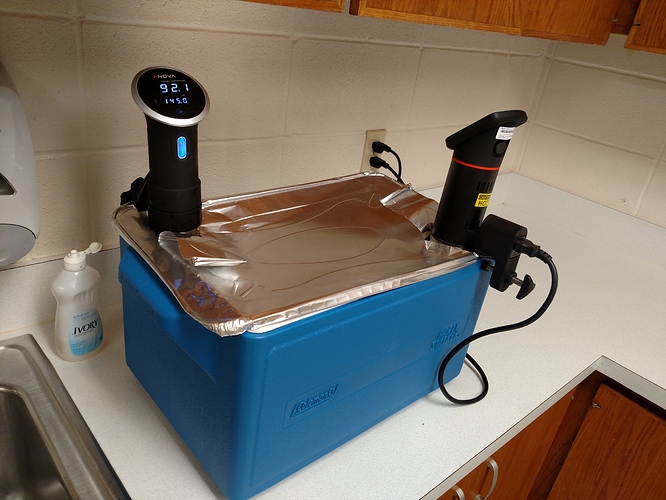