So the pork Baby Back Ribs I’ve cooked the last couple times were SO good ! Then I saw these, and figured I could treat them basically the same way… 150 for 20 hrs ?
But just wondering, for any of you that have SV’d these, do you think they might not need quite as long, without the bone ? Maybe 150 for 12… Or 16 hours ?
Your input please.
Thank you 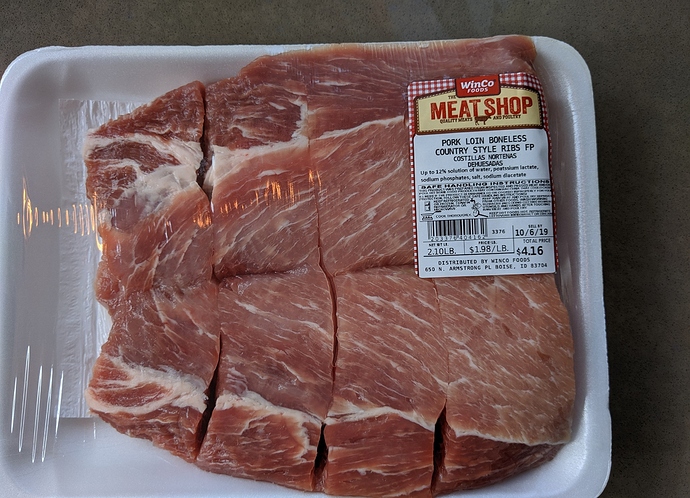 Hey I just had a brainstorm… I’m going to pull one out at 4hrs. Then, depending on how that one comes out, maybe another at 6 or 8 hrs. Then, another at 12hrs. So for only one $4 cook, I should be able to get these dialed in, so that my next cooking of Country style pork ribs, is spot freaking on

Pretty comfy with 150 F though.

I did the experiment with boneless short ribs. I went to 135°F for them and started pulling bags and searing at 36 hours until my last bag at 72 hours. I liked 40 best if I recall.

Got that paring knife yet?

Okay yes, I’d expect a longer time at a much lower temp…
So I just started my boneless pork ribs at 150 F. Anxious to start sampling them

Holy $#@# ! So I pulled one out at 4 hrs, and it was so good, I pulled the rest out, seared, glazed with BBQ sauce, and finished them all

Flavor - 10
Tenderness - 10
Juiciness - 8… Which kind of surprised me, considering how marbled the meat was.
And also keeping in mind, I’d have considered these a 10 for juiciness too, if I had been using old school techniques to cook them. Sous Vide has just raised the bar for what I consider tender and juicy

And to think, I recently said I was getting tired of pork ! I just needed to find the right cut I guess

And dirt cheap too ! I see many more boneless pork ribs in my immediate future

Might even try the next ones at only 3 hrs ? …or maybe just pull out one to try it and see if I can top these.

Great results. I wold have guessed these would take longer to get tender. 4 hours is not long at all.

I know it, right ? They were absolutely fork tender ! I actually broke out a knife, but after the first few cuts, I was just pushing the knife straight down through it

Like I say, if anything, they could have been just a touch juicer, and based on that, I’ll pull one of them out next time, at only 3 hrs, just to see if that’s even better ? If not, I’ll cook the rest to 4 hrs… and maybe leave one for 6 hrs, just to experiment. But if I didn’t have time to mess around, Id do them all at 4 hrs again

And, I’ll definitely be cooking these a LOT more often now… even for my breakfasts

Another thing to try for variation is to season them with Mexican herbs that you like and after they are cooked shred and fry until one side is crispy. With this make yourself a deconstructed carnitas taco leaving out the tortilla. I smoke a lot of pork and this is one of my favorites for leftover pulled pork made from pork butt.

Hmmm. I’m allergic to red pepper… So I get nervous when I hear “Mexican seasoning”

I LOVE Jalepeno’s though, and other hot spicy food doesn’t bother me at all.

I was thinking about a 50/50 mix of Lakanta Sugar Free Maple syrup, and Kikoman Low Sodium Soy sauce… as a marinade, but sometimes, I’ll go on and leave a little or all of it in the bag for SV… This is fantastic for Salmon

Okay, if your not worried about sugar, you can use plain ol’ mostly sugar Maple Syrup.

Apparently those great looking boneless country style pork ribs were mis-marked. When I went back, they had these “but bone-in” for $1.98… The boneless ones (which didn’t even look as nice and marbled as the ones above) were $3.88 a lb ! Nearly double, and lower quality too

Geez, If only I had known, I’d have bought 6 packs of them !

I looked for them on my last trip to the store. There was a marked spot but it was empty and the butcher said they were out. I will look next time. There seems to be end of season sales going on and my freezer is well stocked. I am hoping beef especially round steak and eye of round goes on sale soon as I am out.