Looking for a great recipe to cook Dover sole any suggestions…

Is this what you’re looking for? 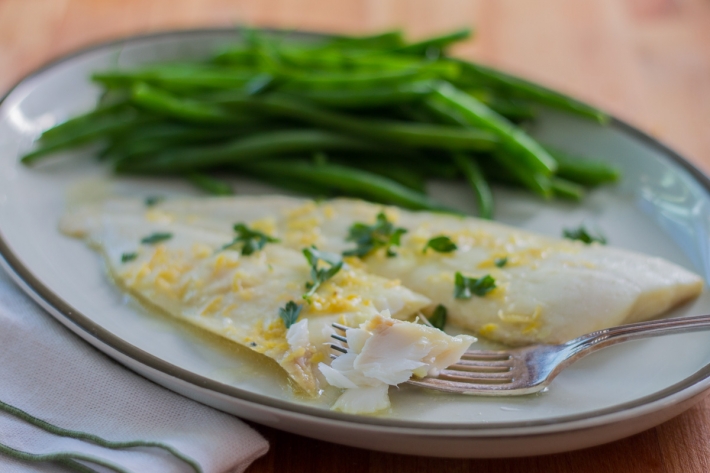 Dover Sole is a popular — and pricey — restaurant dish. Now, with the Anova Sous Vide Precision Cooker, you can prepare it perfectly at home, with no fear of overcooking! Enjoy the recipe below.

Kent, congratulations on your wealth. The last time i saw Dover Sole in the fish market they were about $35 apiece, and they were small ones too.

The photo in the recommended Anova recipe illustrates fillets that appear thicker than i would expect. That likely explains why the recipe’s cooking time is about double the time i would use.

You are certain you have authentic Dover Sole, aren’t you?
OK.

You also know that you will have to skin and bone the fish before cooking. Dover Sole is very delicate and it is difficult to do it after cooking? Not impossible, but tricky. It’s one of those culinary things that takes practice and it can get expensive.

First, how well done do you like your sole? The Anova recipe is in the upper medium-rare to medium range. Just done, rare sole, is done at 108F, and some restaurant cooks go even a few degrees lower. Medium-rare is at 122F.

I find cooking fish SV intensifies its flavour, so i usually avoid unfavourably impacting it in the cooking process, but i enjoy a great natural fish flavour. A great flavour to me might not be consistent with your expectations or standards.

The recommended recipe will result in an intensively lemon flavoured Dover Sole it’s about twice as much lemon juice as you would need for two fillets that size. I would use a teaspoon of zest at the most, too powerful. You will not taste fresh fish. I suggest you not add the recipe ingredients to the fish before cooking, but make it in advance in a small skillet and taste it. You will understand what i mean. If you like it just spoon it over the cooked fillets to serve. I also suggest browning the butter before adding the other sauce ingredients, it will give your sauce a more balanced fullness of flavour which it will need.

And now for some Humble Pie: I believe i owe a lot of community members my most sincere apology for jumping all over them (verbally) for their not thinking in terms of their menu item’s thickness and using weight. I notice the Dover Sole recipe uses portion weight. Then i looked at a few more Anova recipes and they also indicate portion weights, not thicknesses. Old cooks have old habits that die hard gentle Anova users.

Now where was that weight-based cook time spreadsheet i tried so hard to ignore?