How to Read Recipe Reviews?

Hi - I’m a real newbie and this is my first post. I see a star rating system on the recipes but I am unable to see any comments that have been posted. Can somebody help me? Thanks!

The recipes on the site or app are just star reviews, there are no comments attached to them. However, you can see the conversation below the recipe on the site (not yet in the app). It takes a second to load, but they appear at the very bottom of the recipe.

Alyssa…at the risk of getting myself in deep doo-doo, I have to agree with Jackie. If you look at recipe 1 on page 1 of the recipes (medium rare steak) , there is absolutely no input or comments on the bottom of the page although there are tons of reviews and 4 stars attached to this recipe. If you could explain how we can read them I would greatly appreciate it. I notice you say comments can be seen on the site…so what exactly is the site?

Nobody is in deep

Some recipes just don’t have comments because nobody has started the conversation.

The Sous Vide Medium-Rare Steak has comments. Scroll all the way to the bottom of the page. Give it a few seconds - it takes a little bit to load all of them.

Let me know if it still doesn’t show up for you - I’ll investigate.

I can confirm what Alyssa says, they are there. Just scroll way down. Thanks for this thread. Since I use the app most of the time, I did not know there were comments on some of the recipes. This has helped me with some menu ideas for the future. 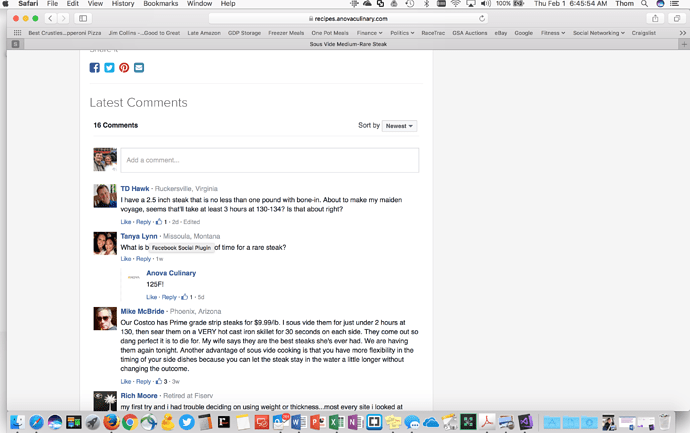 Thanks guys and gals! Alyssa explains it. I just assumed that when you gave it a star rating that the rating also included a comment. Now I know!

I stand corrected. A thousand pardons Alyssa. Guess I was just too impatient. Now…take me out of the doo-doo house.