What do you call it ? The guys over on SV Everything just go on and on about Picanha… Picanha ! When I first heard them say it, I was thinking it was a really prime, expensive cut ! Only to find out its the cheap, tough, London Broil.

Wow. So that’s easy to find anywhere. They recommended only 2 hrs at 129 ??? Well, I prefer mine more like medium rare, to medium, so I did 136… for 3 hrs, and while it came out tasty, and close to the doneness I prefer, it was still not super tender ? Knowing that to make tough cuts more tender, its not like increasing the cook time by a little, but rather, by several hours ! So next time I’m thinking, 134 for like 8 hours…

What do you think ? Who here has London broil dialed in ???

I’d never even heard the term Picanha until about 12 months ago when it suddenly became flavour of the month on the Facebook group. Admittedly, I’d never been able to workout what cut London Broil was supposed to be either over the years that I’ve been sous vide processing. Being an Aussie, it’s not a term we use. Today is the first day that I’ve seen the two terms equated to the same piece of meat. To me it’s a Topside Fat Cap.

I’ve not tried one sous vide, but 8 hours sounds good to me. Remember your collagen to gelatin conversion will happen slightly faster at 136F than at 129F.

Here is a good article on London Broil. It was originally flank steak and it referred more to the preparation; that is what I remember from my younger days. Now it can be almost anything that the butcher wants to put the label on. Picanha or sirloin cap is a late comer to the London broil party. I first had it at a friend’s house who is Brazilian. I have subsequently had it at the Brazilian Steak Houses.

I would try a couple of more hours. Time equates to tenderness in red meats. 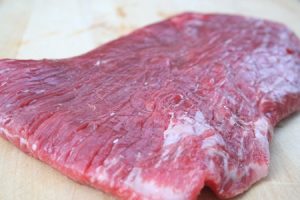 What Exactly is This 'London Broil' I Keep Seeing On Menus?

So, you go to a little greasy spoon diner, and you see "London Broil" on the menu. A few days later, you go to a fancy schmancy sit-down dinner restaurant, and, again, they have London Broil. Later, you to to lunch at one of those semi-casual...

I wonder how much of that popularity came from the popularity of the SV Everything YouTube channel ?
They constantly rave that it’s the best beef on the planet… Other than maybe Wagyu…

Yea, pretty hard to say what really is London Broil, I guess. And personally, I always felt like it was a pretty low budget cut if meat anyway… Would only ever choose it for beef jerky, and now, for SV…

It’s always amused me how London Broil has no relationship with London or broiling.

Somewhat like America’s Federal Reserve Bank. A creature of The Bank of England, J. P. Morgan, and the Rothschild Family. It’s neither a bank, nor a part of the Federal Government, and really has no reserves, but creates money out of nothing. Scary.

No one has mentioned a bottom round roast which is similar to London Broil with a nice solid muscle, good shape, and flavourful. Great for SV cooking.

Picanha is definitely not the cut used for London broil. As others have pointed out, it the sirloin cap and popular in Brazilian steakhouse. But like Ember says, it became a “flavor of the month” for some reason. For my taste (and dollar), it’s way overrated despite the passion that the boys at SV Everything have for it. I think it’s more patriotic than realistic (a bit like the emperor not having any clothes). I’ve cooked it myself and had it at least two restaurants, not including a few rodizios that I’ve been to. It’s an OK tasting steak without nearly the meatiness of a ribeye. A pet peeve of mine with the SV Everything guys (note: I’m a huge fan and think they’ve done tremendous things with techniques, experiments, etc.) is their insistence on adding garlic powder as their base seasoning in addition to salt and pepper. Ironically, the only exception they make is when they’re preparing picanha which they insist must only be prepared with salt and pepper. Go figure…

Thank you Nestorph. Interestingly, the last “London Broil” I bought, was labeled “London Broil Top Sirloin”… and it had the cap on it ? It came out okay… good flavor, and correct doneness, but it was not super tender. I SV’d that one for 22 hours, but it probably needed more like 30-35…

I do kind of like garlic powder on everything

But thinking, that for my next SV, I’m going to add whole crushed garlic cloves, as well as fresh rosemary leaves, and basil.

Crushed garlic cooked at low SV temperatures can get mighty unpleasant during a cook.

But Chatnoir, do you mean by letting smell out of the SV tub ? Hopefully it won’t taste bad, as I actually have another roast going right now, in which I added a generous amount of fresh crushed garlic cloves, rosemary, and basil leaves to the bag.

I have one of those silicone covers for my 12qt Rubbermaid container. Often I lift one corner to make sure I don’t have any leaks, but so far I never have.
Yesterday when I did that, I did smell the garlic, and maybe the rosemary and basil, but I wouldn’t say it was really unpleasant… Hmmm.

What is Picanha Steak?
As the English names (sirloin cap, etc.) imply, picanha (pronounced pi-CA-nya) is the cap or top muscle of the sirloin, lying at the very top of the cow’s rump. It is a deeply beefy cut with flavor for days that is still tender enough that you don’t have to melt all of its collagen. Mind you, it’s still best sliced thinly against the grain, much like a flank steak, but it is a relatively quick cooking cut. The fat cap of the cut is left intact, creating a self-basting layer that can protect the meat from the extreme direct heat of the grill’s flame. Not to be comfused with tri-tip.

Chris, it’s not the smell of garlic that concerns me. Be very careful temperature-wise if you are cooking something now with raw garlic and plan to consume it soon after cooking. You should aim to Pasteurize whatever you are cooking.

I won’t add raw garlic to anything being cooked at a low temperature like SV. Most responsible recipe writers don’t include raw garlic in low temperature recipes, and particularly when the garlic will be in an anaerobic environment like SV where the bacteria multiplies rapidly without the presence of much oxygen.

As i understand it, garlic can contain Clostridium botulinum, nothing to be casual about. Garlic gets it from the soil it grows in. The spores are extremely heat resistant as in surviving boiling. The toxins produced by the spores can be deadly, however they are fragile enough to be killed by ordinary cooking methods, other than Sous Vide.

To be safe, you need to cook and hold the food with raw garlic above 130ᴼF. The garlic will still be raw. If not consumed right after cooking, thoroughly chill in an ice bath for an hour per inch of thickness. Freeze, or hold refrigerated for a short time, no more than a week.

Table 5.1 has the Pasteurization times for meat.

Hmmmm. Okay. It just seems like fresh garlic (or just about ‘fresh’ anything, for that matter) would have more, and better flavor. I have used granulated garlic in all of my SV’s up until this one.
You said, to be safe, it needs to be cooked at 130 or above ? Okay, well this SV roast is being done at 135F for 24hrs. So I should be okay, right ?

So how do you you feel about fresh basil or rosemary being added to the SV bag ? Id think they could potentially harbor bacteria also… But again, I figured 135 for 24 hours would take care of that too…

Oh, and also, as soon as the roast comes out of the bag, the garlic, rosemary, and basil will be discarded. Only used for infusing of flavor.

I’m a dedicated fresh is best cook too. i just don’t like to use ingredients when they don’t contribute much flavour. I do use them in SV because it make me feel good and i always pick more than i need.

You still might not enjoy that raw garlic flavour.

Where would basil and rosemary pick up bacteria?
Maybe from a cutting board or an unwashed knife, but that’s not likely in your pristine kitchen.
Leaves like basil and rosemary are rarely a problem because they are not living down in the soil. They get rinsed with mostly pure water every rainy day and have a healthy dose of UV-radiation on most days.
Can’t get much cleaner than that.

I don’t find there’s much flavour infusion going on in SV cooks except with salt. I do most of the enhancements during the finishing stage.

You have me concerned now, more about taste…

Honestly, I find uncooked garlic to be horrendous ! I assumed 130 for 24 hours would cook that too…

Just remember that the temperatures used for cooking most proteins sous vide don’t get anywhere near the 184F required to break down vegetable matter and cook it. Herbs and vegetables will still be essentially raw. In the case of leafy greens, wilting is usually enough to make them edible. Woody or fleshy vegies usually require high enough temps for pectin breakdown.

Yep, but I don’t even have any plans to cook veggies in the SV.

Just took the roast out of the SV, picked off the garlic, rosemary, and basil leaves and tossed them. Perfect way to sample the flavor is a little spoonful of the juice… And I was worried about the garlic… Ha ! Honestly, it was excellent ! If anything, the Rosemary overpowered the garlic.
Might need a little more salt, so I’ll probably just add a little salt to the gravy, before simmering with a little zanthum gum for thickness. No cornstarch for us Keto folks

Giving it a couple hours of cold smoke right now, which is actually 150 degrees… I just checked it. So now I’m concerned about making it too well done ?

Will chill it for a few minutes, before a quick torch searing.

And then dinner time, along with creamy baked Brussels and bacon

Herbs and spices both fall into the plant category though. Some require cooking ti get the desired flavour.

Anything in the alum family, like onion, garlic and chive are worth being wary of at protein sous vide temps.

Herbs need strong oils or large amounts to have much impact in sous vide. And some spices don’t offer much flavour at all SV.