I am using the oven for all stages of rye bread: from several fermentation stages at temperatures 30-65°C (85-150F) to proofing and baking. The possibility of the precise control over the fermentation temperatures was one of the reasons I got the APO to begin-with: the dough needs to be kept at a precise (+/- 1°C) constant temperature for periods up to 24 hours.

However, the dough temperature measured by the oven’s own probe (verified by external probe) is always higher than it’s internal temperature, sometimes by 10-15°C. This difference is not consistent. For instance, to keep the dough at 50°C I need to set the oven temp anywhere between 38-45°C depending on the day.

One can reproduce the issue by placing a pot with water in it in the oven and putting the temp probe in it.

One theory I have is that the hot air blown by the heater warms up the pot, which then keeps the temp and warms the dough. Another to do with air circulation being affected by the relatively large pot. I tried using pots of different sizes and materials (metal, glass, silicone), but the problem persisted.

Does anyone experiences anything similar? Any solutions out there?

I occasionally find my probe all over the map. Support here suggested it was probably caused by humidity in the probe jack. They suggested 20 minutes at 400 degrees, zero steam with the cover off the probe jack. Worked, although I have had to do it a couple of times since.

Maybe give that a go?

Sadly, the prob measurements are real. Verified many times with an external thermometer.

As Montgomery Scott once said: “Ye cannae change the laws of physics.” I am not aware of any way that an inert object can somehow be hotter than its surroundings unless it started that way or is subject to some sort of radiation.

So I submit that either the oven is hotter than it claims to be or your probe (like mine) is off.

Mind you, if we’re talking about low temperatures, radiation is an issue: The light in the tight space of the APO makes it an Easy-Bake Oven at low temps. I turn mine off almost always.

Here’s the picture of my situation, to make it more tangible (the dough is inside that metal container): 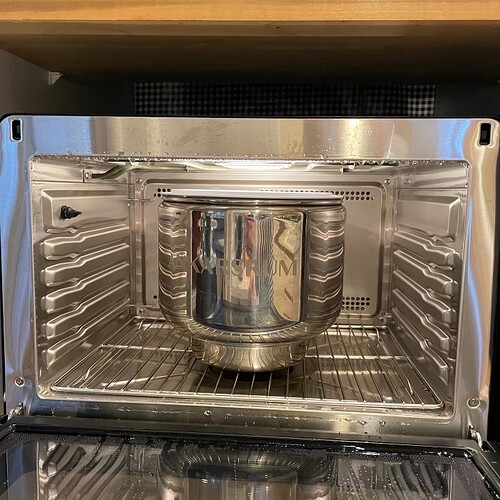 It would be lovely if Anova folks could verify or refute this theory? Anyone?

You are right that some fermentation processes can by themselves warm the dough, but not to the same extent. At any rate, as I noted, all this is reproducible with a bowl of water too.

I’ll appreciate any thoughts from the community or Anova pros!

I see what you’re saying about the fan, and you could be right. Did turning the light off help? Could be a combination of things.