Cooking gurus that I am reading criticize the flavor of propane and butane fueled torches, likely for the mercaptan oderant added.

Are there recommendations of power of an electric torch / hot air gun?

Edited to add: Just now in conversation with my Son in Law professional chef (ex-Sous Chef for Peter Merriman at Maui). He says Searzall sucks and has offered his Searzall to me.

Meanwhile I can find no recommendation pro or con of an 1500 Watt electric torch / hot air gun.

Hi Douglas, for this cook’s 2-cents worth heated air wafting over the meat wouldn’t be comparable to a broad flame or a hot surface contact. You might get some browning with a hot air gun, and a tired arm too.

Did SiL give you reasons for his results with Searzall?
Many pros use butane torches.

He did not give a reason. He did say (I think it was) black iron pan as hot as it will get.

If one has ever smelled Thiol sulfur-hydrogen called mercaptan and smelling of pure rotten eggs or garlic, then aversion to that taint in food might be obvious.

The only reason a flame looks like a flame is for glowing incandescent carbon particles not present in air.

On the topic of the ‘flame’ appearance of hot gases, a training demonstration of the effects of a power plant steam leak has a 2 inch diameter valve opened in a 600 PSI steam header pipe. It looks like a six feet long pale blue flame of superheated steam, that does not condense to saturated steam until it collects in the overhead of the building.

One advantage restaurants and a few homes have is an exhaust fan to discharge the smoke generated when searing in a cast iron pan. I use a single burner propane stove outside for my sear with a cast iron pan. I also have a tiny Green Egg clone that does a great job. It is a bother for just searing so I use it when I have other things in addition to the meat to grill. 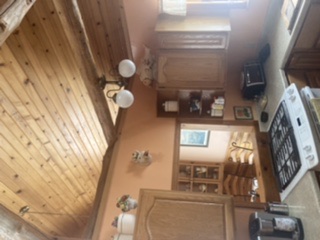 I have often thought of a custom range hood, but shudder at the expense.

My home is very non-standard, being homemade by an old seaman and his sons. Sorry about the rotation, the seas are not that rough. When we were moving in I found his AB Seaman Card dated when he was seventeen years old.

So now the question is of the function of the excess heat energy beyond that necessary to get the surface to 300ºF. I am pretty sure that it is to dry the surface to prevent the cooling effect of steaming away the moisture. Temperatures cannot exceed 212ºF in the presence of liquid water.

I found Herve This’ book Molecular Gastronomy: Exploring the Science of Flavor at ScribD. In it, among many other things, he explains that water judiciously added to a meringue increases the volume many fold, to liters of egg white foam.

Check it out: Molecular Gastronomy by Hervé This - Ebook | Scribd

I found a YT video of a TV-chef demonstrating searing with an electric hot air gun of similar specifications 1500 Watts to mine. His critical comment was that it was slow.

Previously he demonstrated SU-V Gun searing torch, and commented that it was too fast. He also commented that off flavors were avoided by not using the close cool-blue part of the flame, made of uncombusted chemicals, presumably the Thiol - mercaptan oderant.