APC is shutting off during cooks. This unit is a replacement for the original that suffered the same issue. Sometime during the cooking process, the unit shuts itself off. No error codes. Submitted request to support email and have heard nothing in 4 days. Left voice mail this morning with advertised number as well. Enjoy sous vide cooking but disappointed with this product and Anova Culinary support.

I see your ticket from Monday, two days ago. We are experiencing higher than expected ticket volumes, so response times are little longer than usual. But someone from my team will follow-up!

Two units both shutting off the same way? You really should be suspecting something environmental in nature (odds seem remote that two units would have the same defect like that).

AlyssaWOAH is correct in that the support ticket request was two days ago, though first contact was two days before that with the submission of a return for refund form on the website (my mistake). I have heard from support (thank you for your reply, Carlo) and awaiting next steps. I do want to address the excellent questions from fischersd, as I am of the same mind, two devices both showing issues in the same way seems suspicious.

The area used for Sous Vide is a section of kitchen counter space and the unit is situated so that nothing is close to it or it’s container while operating. Vapor could certainly get into the head of the APC and I would expect it to if not for some kind of sealing mechanism. I have a dedicated tub with cut-out lid for the APC leaving 1/4 inch between the cut-out lid and the APC around it’s circumference. I don’t know how one would keep vapor/steam away from the head unless you wrapped it in something, which would block air flow.

I am not using the APC with a transformer, just directly plugged into house 120 outlet, no power strip.

The APC shutting off is appears to be entirely random. It has occurred while heating up to selected temperature, an hour or so into a three hour cook … no reliable time when it happens that points to a possible cause that I can ascertain. I do not use the app (bluetooth) as I tend to cook different temperatures and duration for different food items or thicknesses. So far, all cooks have been between forty-five minutes and four hours and between 129 F and 160 F.

The APC exhaust vents are not in any way blocked during use and the unit is thoroughly dried off before storing. I use that same outlet for other electric small appliances, though never at the same time (crockpot, instant pot, griddle, pannini press) with no issues. Power where I am is generally reliable.

If I am able to point a finger at a possibility, I’ll be sure to update this community. Thanks for your attention to this post.

If you have a friend that will let you run your APC at their house overnight you can maybe rule out your environment at least. Just take it over to a friends and run it for 24 hours. If it doesn’t shut off in that time then your current cooking environment is suspect.

If it doesn’t shut off in that time then your current cooking environment is suspect.

For an intermittent fault, you need more than data point before drawing conclusions.

Thanks for the answers!!

You have one of the notched lids (so you can still use the clamp that came with the APC to keep it secured to the side).

Is the space above the APC open? (or do you have it underneath the cabinets?) Just wondering if the vapour has the opportunity to pool, creating a humid space.

The design of the APC is flawed that the electronics in the “head” of the unit are wide open to the outside air…there is nothing to keep the vapour from coming in those vents and causing the electronics to fault or fail. (it’s quite common - happened a lot to me until I got my sealed lid).

I’d suggest finding something (cling wrap?) to go around that 1/4" gap at the bottom of the APC, providing a good seal. Monitor it…see if there’s any indication that the steam is escaping and traveling up to the electronics. There should likely be condensation on the plastic shell if there is. Just make sure you’re not blocking the exhaust vents in any way.

Speaking of the exhaust vents…you do have air coming out of those during your cook, yes?

I appreciate the continued input to this issue. I like to know why something fails rather than just shrugging it off.

Mirozen
You have a good idea and while really no home has absolutely clean, consistent power (unless they have a whole house system to condition it), moving to another entire electrical distribution circuit has merit. Like michihenning points out though, the random and intermittent nature of the issue may not manifest again for a few cooks … OR it could happen the very next cook which would lead to thinking it was not the environment. Just not sure that effort, while a great idea, would be a reliable test.

fischersd
Yes, a poly-carbonate tub with lid that I cut out for the APC. The unit is secure when being used and is sitting on an open counter top with nothing else near it or over it during the cooks. The exhaust vent does produce outlet air though fully sealing the gap is a good idea, I had not thought it necessary before but your argument is compelling. I can use some slit plastic tubing to fill the small gap between the APC and the lid to produce something of a seal.

Here’s a question along this vein. For the sake of troubleshooting lets assume the worst and say there is some moisture getting to the electronics. Wouldn’t you think there would be a more permanent failure from that exposure? By that I mean, most other kinds of electronics don’t tolerate much moisture before they fail catastrophically. Take a cell phone for instance, drop in the water and it probably will stop working altogether and only after a time-consuming drying process may it possibly return to life. Most things don’t recover, let alone right away like the APC did.

During my last cook, it stopped for some minutes judging by the drop in water temperature. The APC was in the OFF mode, meaning with a display and start button light red instead of dark red as when running. Depressing the start button produced the expected circulation and fan noise but then went totally off some fifteen seconds later, no display, as though it were unplugged. I unplugged the APC, removed the element collar, inspected for obvious damage like something stuck in the impeller, replaced the collar and plugged the APC back in again, pressed start and APC ran as expected for another ninety minutes finishing the cook.

As an update, Anova Culinary support has made steps to return this APC for a replacement. Kudos to them for backing their products!

I have used baby bibs with good success. I usually a cloths pin to secure the bib below the vents with the pin opposite the vents. This allows the largest portion to be below the vents

Congratulations on a creative solution to an APC challenge.

I’ve never had an interrupted cook, but can appreciate how frustrating it must be.

I suspect that Anova has treated the electronics in the head of the unit with water resistant compound…it’s not the moisture, it’s that the water vapour is making the electronics too hot - causing an intermittent failure.

Yep, I’d try creating a better seal around the unit. (this is why I’m a big fan of using a hole saw…true, you have to remove the APC every time you want to open the lid, but you can virtually eliminate evaporation as well as the risk of hot water vapour overheating your APC).

Me, I’d rather see a sealed, locking lid with a hole saw cutout for the APC (this is what I did with my Cambro container).

Quite true michihenning! When I suggested just a single run of 24 hours it was based on the idea that there were two units both failing within four hour cooks. Did not sound like it was happening on only the occasional cook.

Use the top of a margarine tub and set the metal portion of the circulator on it and trace around it. Cut that traced circle out with an exacto knife or single edged razor blade and you have a collar that will slide up the circulator and provide a “steam shield.”

I wasn’t having the problem of it shutting off, but did notice some erratic Bluetooth behavior when I was seeing if it was calibrated right using boiling water. I cut a “O” out of clear plastic that fits over the shaft to prevent vapor from going straight up into the unit. 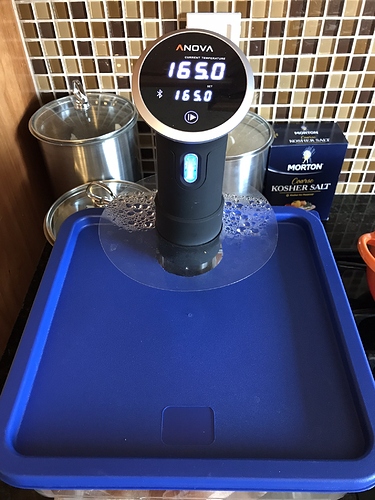 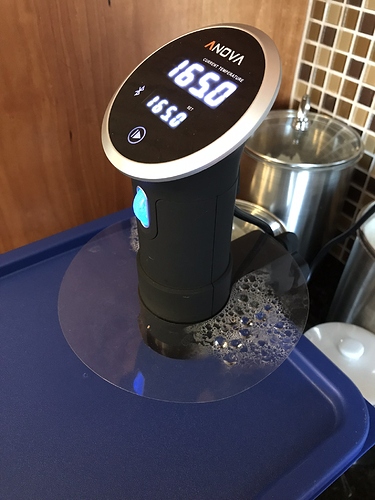 In case power fluctuations may be causing this, i’d try plugging into a battery backup to try and stabilize the electricity…
I’m about to do some long cooks (bone-in pork butts), & i’m going to use a battery backuip… (even though we have a whole home generator, it doesn’t kick in for 15 - 30 seconds)…

Yep, definitely advisable to have a UPS for longer cooks…that delay to the generator kicking in is enough that your APC would stop. (default behaviour is not to resume the cook after a power loss) - this is a safety feature - as if they resumed and your food was in the “danger zone” for too long, you’d never know it and run the risk of getting sick.

I know this may sound like a stupid question but is your water level staying well over the min. level?

twm
It’s not a stupid question at all. Sometimes I overlook the most basic and obvious possible cause when I hurry troubleshooting. To answer your question, every cook I have done has been either middle or upper level between min and max on the APC.

I really appreciate the input on this thread. It’s been a bit since I posted and wanted to circle back with some input of my own and my admittedly unscientific conclusion.

On another thread in this community, someone pointed out that every video or photo from Anova Culinary shows the APC in use in an open vessel. No lid. That made me wonder if the lid idea, where the only open area for vapor to escape was in close proximity to the APC, wasn’t significantly concentrating the APC’s exposure to a moist environment, assuming the root cause really is attributed to moisture. So, after trying a few experimental cooks with ideas found in this thread and elsewhere to manage escaping moisture, it seems to me the most effective way to reduce moisture exposure is cook with an open vessel while using something along the lines that Dr_Rok and SutoJL offered as solutions. Using a lid helps heating and keeping temp as well as reducing loss of water to evaporation. But how much water is lost during a long cook? How much more time is the APC heating in an open vessel versus one that is sealed?

Most of the experiments I’ve seen reported indicate that for long cooks, uncovered containers result in roughly twice the average energy usage by the cooker compared with the use of some sort of evaporation mitigation (lid, foil, plastic wrap, balls, etc).