Well after cooking a brisket a few weeks ago and not personally being all that satisfied with the results I decided to look for something else that was similar in price that I could smoke.

I ended up with 15 Lb Bottom Round from GFS. $2.99 Lb vs the $2.79 Lb they charge for Brisket. My thought was there would be much more meat at the end due to less fat.

So after just a simple costco bought Butt Rub seasoning and sealed up into the Sous Vide it went for 36 hours at 150 Deg. After that 2 hours(3 next time) in the pellet smoker and 30 mins in oven at 425 Deg(for the crust).

AAAANNNNDDDD I dont know if I will ever go back to brisket. Yes much more meat at the end of the process.

The most tender meat!

All under the watchful eye of the Food Safety Officer/ Quality Assurance! 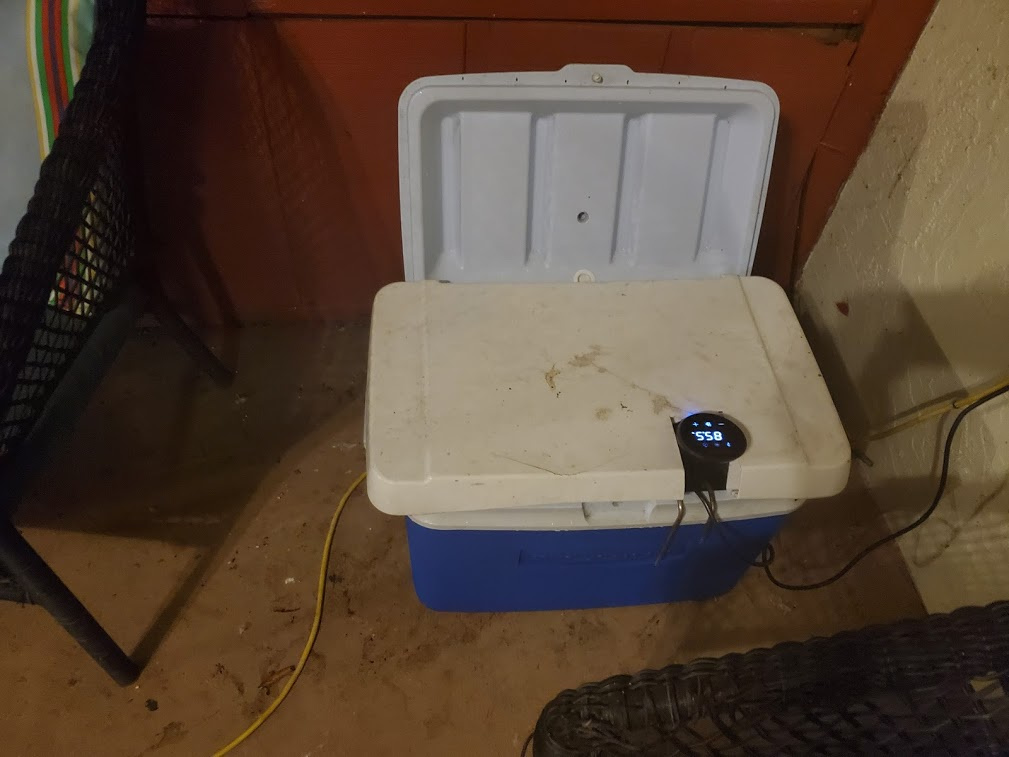 Do you like your beef that well done? I know traditionally brisket is smoked until it reaches around 200° F. It is normally tender but can be dry. I like my roasts in the medium rare range and normally do them at 135°F.
I did beef short ribs at this temperature for 48 hours and they were tender. It is a bit different to see short ribs with red meat as they are commonly braised or cooked to the same temperature as brisket on the smoker.

The GFS a few miles from me was just closed but there is another one about 10 miles away. I may go pick up a roast for this weekend.

I put my ribs under the broiler (after basting them with sauce) for 12-15 minutes. Works well, and tastes great.

I have no doubt this was everything you describe - eye of round has been a staple on my shopping list since I got the SV, a local supermarket chain frequently featuring whole eyes for $1.99/lb. But as a replacement for brisket? I’m having trouble wrapping my brain around that. One of the hallmarks of a good brisket is the mouthfeel that the thick layer of fat brings to the party. You just can’t get that with an eye.
That said, I’m definitely going to play around with this idea, as I’ve found that there’s not a helluva lot you can’t do with SV. Thanks for that suggestion.

Bottom Round has quite a bit of fat on the one side.

I split it into two sections to make it thinner and take more smoke.

Also to be clear this is the entire bottom round flat untrimmed. Not what you buy in a standard grocery store.

This is from this weekend and was very tender and juicy PLENTY of fat.

fat side…forgot to take pic before seasoning it. On left left side you cab get an idea how much fat is actually there.