Geez, for this price, if I can get this dialed into perfection, I might not hardly eat anything else

Before you pick up your knife to cut those steaks think just how you are going to cut them. Plan first, then cut.

Well I saw both prime and choice, (choice is the best, right ?) and even the choice was only like $3.73 a lb. The grain runs length wise, so I was thinking about just cutting it across the grain, and chopping it into steaks the whole way down, no ?
Not intimidated by 2 or 3 day cooks… just so they come out medium rare, and very tender. What would be your suggestion for this result ?
At first I was thinking about cutting it into equal thirds for storage, but the more I think about it, maybe I should just steak the whole thing right from the start ?

Choice is the best and for brisket it pays to get it. The only brisket I have done sous vide is corned beef. A little different. Look for the one with the most marbling.

If you are buying a whole brisket I would recommend that you first trim the fat from the bottom and all but a quarter inch from the fat cap on top. A brisket is actually 2 pieces of meat. The bigger bottom piece is the flat and the smaller fattier piece is the point. They are separated by a layer of fat. Personally I would treat them as 2 cuts of meat and separate them especially if you are going to make steaks. The flat is often injected with beef broth to add flavor and moisture.

I would look for a recipe for burnt ends for the point. These are the prized part of the brisket. There also should be recipes for the flat. I have only smoked brisket so I will let you look for a sous vide recipe that looks good.

Here is a picture of a brisket 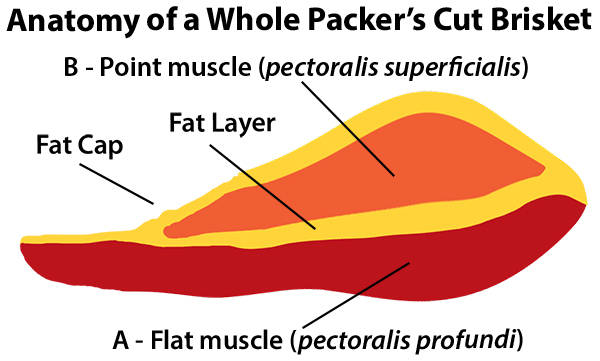 Since they are cheap you may also want to consider making your own corned beef and pastrami (smoked corned beef). Corned beef sous vide is the best I have ever had.

Well, I’m back to thinking roast style cuts. Watched a bunch of YouTube vids on Sous Vide briskets… And a couple looked pretty good. I think I saw one that suggested 48 hrs at 130, and another which was done for 24hrs at 155 ??? Such a big variance in time and temp, yet both claim they came out great… kind of leaves me wondering wth ?

USDA Prime is a higher grading for meat than USDA Choice.

John, perhaps I’m just not familiar about some quality of the brisker cut that makes “Choice” brisket a better selection? I’ve not cooked a brisket yet…

You are right I somehow thought one thing and typed another…

But after a SV, I wonder how much difference their will really be ? To be honest, Im just going to go by availability, and appearance (marbling). I’ll get whatever they have that looks best. Heck, even $3.79 is 1/3rd the cost I pay for Ribeye steaks !

Right now, I’m just having the hardest time trying to figure whether I will do 60 hrs @ 135, or 30 hrs @ 155 ? In reality, I’ll just have to try both and see which one works best for me. And what the heck, I’ll be doing probably 3 or 4 separate cooks from one good sized brisket anyway

I just need to do the 135 and 155 cook, from the same part (either the flat, or the point) so I’m comparing apples to apples… Probably start with the flat, as I hear the point is the best part, so Id rather experiment with the lesser stuff, and do the point once I have it all dialed in

Why not start two pieces at the same time at 135 Chris, then try one piece after 30 hours and if you think it is OK take the second one out and chill it and if it is not as good as you hoped for leave the second one in for longer and if necessary increase the temperature.

Well, it would just be more food than my GF and I could eat for a dinner, and even with leftovers.
I am keeping my mind open about doing more than one thing in the SV machine at the same time though… For instance, say I’ve got a 30 hr roast or brisket going, I might want a steak for dinner that night, so that roast is going to share some space for a few hours

If you want to do a steak like cuts from brisket, separate the flat from the deckle, remove most of the surface fat, cut them into “steaks” and cook for 48 hours (i got 129-135°F) you get good results.

Before you go down this path you should probably learn a little more about Brisket. I’ve done whole packers SV at 155° F but then put them on the smoker and served them as traditional BBQ. If you like very fatty steak the Point muscle is definitely that. The Flat is much leaner and both muscles have a lot of tough connective tissue that needs a lot of time to render. I tried Google to see if there was anything on Brisket Steaks and came up empty. Brian 1 has the only recipe I found. Good luck.

As I already mentioned, I’m over the idea of steak cut brisket.

I’m am going to section it into 3 - 5 roasts though, mostly because I’m only cooking for 2. And I will be cooking the flat and the point seperately.

That’s going to be a matter of preference. Let us know which one is your preferred after figuring it out.

And what would be your purpose in cooking at 155ᴼF when you are a self declared Medium-Rare couple?

What is your doneness expectation of a great roast?

Well, I like steaks just a little pink… Or medium / rare. But I’m thinking with brisket it might be better medium… So long as it’s juicy and tender.

And BTW, I did end up getting a 15 lb brisket, but holy #& ! What a PITA it was to trim the fat and section it into 4 portions ! To be quite honest, I kind of murdered it

lol Telling you, that cow died twice !
Therefore, I probably won’t post any pics of it. Just hoping it tastes good.

Anyway, I’ll see how this goes, and based on this one, maybe I will do the next one lower and slower.

A little off topic but close enough. I have developed a relationship with the butcher at a couple of our local markets and I often order beef from them directly. Some of the cuts can be ordered in different states of trim. One benefit of doing this is cost. I recently got several whole eye of the round roasts slated for jerky for over a dollar a pound less than the ones on display. Some of these cuts are also quite large and as you have seen require the fat to be trimmed. You can also buy meat this way at Costco.

When trimming meat the one thing that is an absolute must is a razor sharp knife. I keep mine shaving sharp and use a steel prior to each use. Another tip when trimming is to have the meat very cold. The warmer it is the more difficult it becomes to trim accurately and quickly. These two things make trimming a lot easier and the result will be more pleasing. As with most things keep practicing.

Hey John, I think this was completely pertinent to the subject ! Great idea !

I have actually talked at length with the head butcher at the Raley’s right next to our house. He had already said he’d cut whatever I wanted.

Granted, their “normal prices” are quite a bit higher than Sam’s Club… But they get some pretty good sales.
If one or two of my brisket cooks comes out really good, I might have him seperate a point and flat, plus trim the bulk of the fat for me, on a nice big brisket, the next time around

Thanks again for the great suggestion.