I bought my first Anova Wifi unit a week before Thanksgiving. This is the third one (first two returned to Amazon due to quality issues). This particular one, I think I got just before Christmas.

I’m rather disappointed with the fit of the stainless sleeve that shields the heater and impeller shaft. Over the past two months of use, probably 15-20 uses at the most, the fit between the stainless and the plastic that it mounts on has become quite wobbly and loose. Occasionally I hear the impeller hit the stainless that surrounds it - usually only a couple strikes at a time. I find this quite disappointing, and if I weren’t outside my 30 day Amazon return window, I would return it.

Regarding the “wobbly” fit of the stainless steel sleeve, I wonder if you could use a small bit of silicone along the point where the sleeve screws onto the unit. This would hold it tight - which hopefully would prevent any wobbly movement that probably causes the occasional impeller hits you are experiencing. Hope this helps. Good luck!

That’s pretty messed up that you have now 3 units with quality issues. You need to contact support@anovaculinary.com and get a warranty replacement.

As for the impeller hitting stainless? Sorry…not possible - the impeller blade is down in the end cap (plastic) - if you had the impeller actually hitting the stainless steel, that would mean the impeller shaft is at least 1" off of vertical (pretty far out of alignment indeed!!) and much shorter than it should be.

Hopefully your replacement is flawless!!! You certainly deserve it!!

Wow, for someone whose idea of an inch is about 95% away from reality, you seem pretty convinced that I’m incompetent at mechanical aptitude.

I can assure you that the impeller touching the steel housing is possible, and that the clearance is actually more accurately measured in fractions of millimeters, so lateral movement of the housing very much does put this within the realm of possibility. Also, I have enough experience with fluid systems to tell you that if the clearance were one inch, the impeller’s spinning action would not create a very effective discharge, and would end up mostly locally heating the water within the plastic end housing by friction, and most of the water would not come out of the pump.

The impeller is close to the bottom of the sleeve but should not make impact unless noticeably bent or short. The noise is more likely to be the impeller shaft contacting the heating element just above the sleeve bottom.

Apparently you’ve never actually seen an Anova cooker. Here are a few pictures to help you to understand. 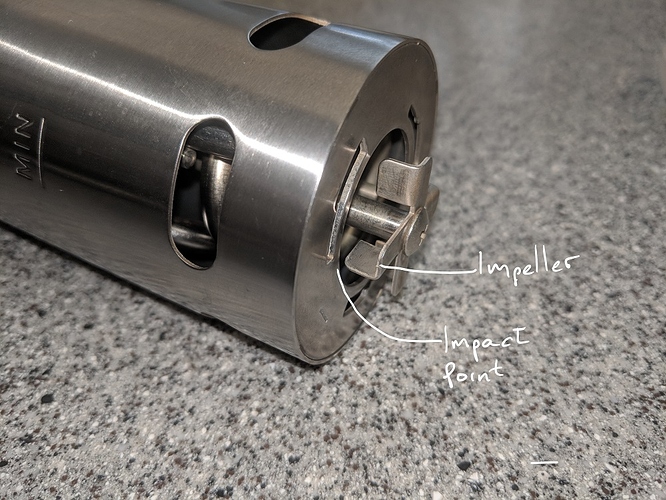 The impact point is the point that you said, “should not make impact unless noticeably bent or short.” As you can see here, the impeller is only about a millimeter or so away from the stainless sleeve. There is enough play in the sleeve’s fit to the device to allow the impeller to touch the sleeve on occasion.

Here is the device without the sleeve: 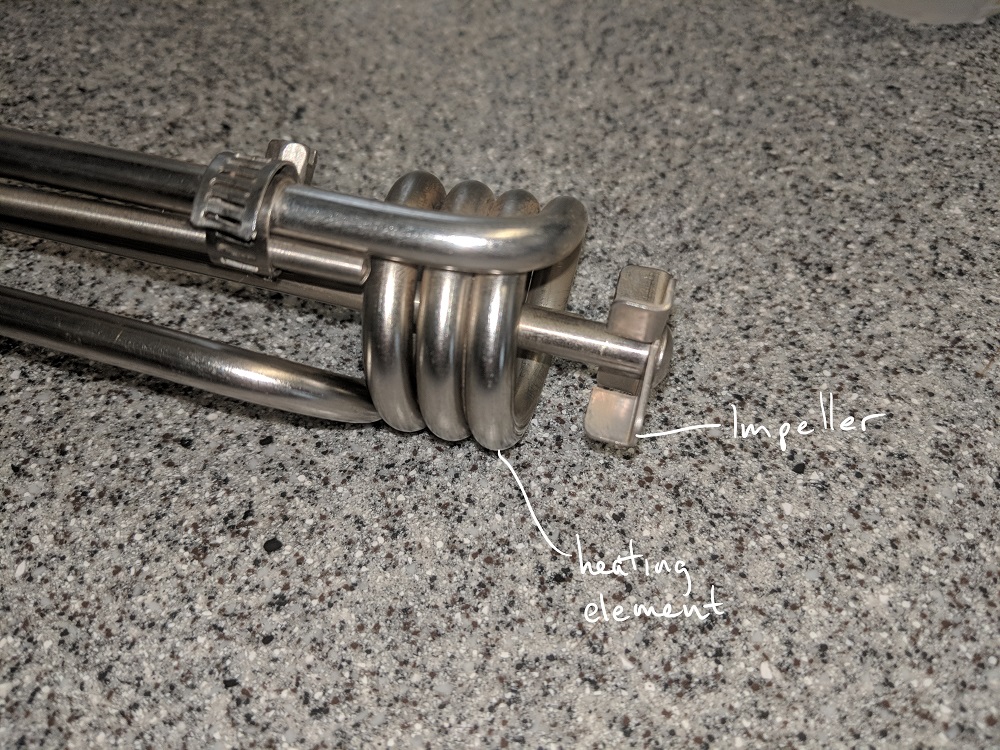 As you can see, it would take a very radical bend to get the impeller to strike the heating element. Such a bend that it wouldn’t take a first year engineering student to correctly estimate that such a deformity would rapidly result in the burning up of the motor.

Another view, showing the distance of the shaft from the heating element: 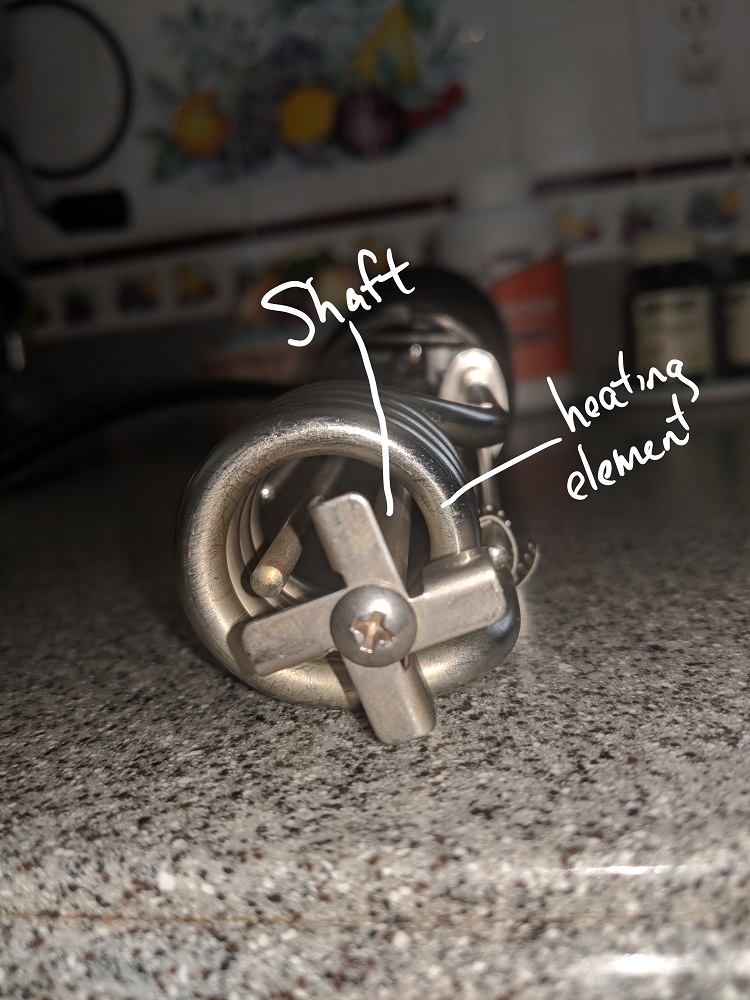 Now, would people who’ve never laid eyes on an Anova circulator please stop telling me what my device can and cannot be doing??

Thanks, Mirozen. Your suggestion is the only one so far that actually shows an understanding of the problem.

When you suggest silicon, I’m thinking of a couple things… I think like a piece of silicon from a baking mat is too thick. I am actually thinking of something thinner, but not sure what that is yet. Whatever it is, it needs to still allow for the sleeve to be removed, for cleaning. At this point, I’m not quite sure what it is.

I am still pretty disappointed in Anova for the quality issues, and do want to hear their reaction here on the forum.

Wow! Quite the over-reaction…fine piece of work.

I was thinking about it actually hitting the side of the canister, as opposed to the end - as I mentioned in my post, the shaft would also have to be shorter to do so…anywho, neither here nor there as your impeller shaft looks fine from the pics.

The only way you can have it hit stainless is to have the skirt not seated all the way - that it’s lower - otherwise the impeller blades will hit the plastic ring in the end cap. But, as yours wobbles, your skirt is being lower, out of alignment.

You really should get it replaced under warranty, but as it appears you just can’t help yourself, I’d suggest you pay attention to the channels on the plastic main body that the skirt screws into. You see the dot at the end that they lock into? It’s there that you would want to put a very thin layer of silicone to provide more resistance / a tighter fit when the unit is locked.

As for hearing from support - for the most part, the only Anova regular in here is Alyssa - our community manager. Hence, my recommendation to you to contact support. The community has been setup such that Anova customers can help each other.

@Rich You’re probably right about the mat cutting not being “thin” enough. Thinking further on this I think there may be a pure silicone caulking out there that might just fit the bill. As long as it retains its form at +210 degree F temps it might be the answer. Fingers crossed for you!
(And that’s an excellent series of photos detailing the issue!

…Adding an edit here that I’d second the suggestion by @fischersd that you should contact support. You deserve a new flawless unit and are under warranty - though having had three units already I can understand why you’d be reticent!

You’re just bound and determined to blame the operator. Why don’t you just go away?

Fact is, that’s not the only way. Another way is that the connection point between the skirt and the plastic body is loose (like I plainly stated in my original post).

Believe it or not, but that’s actually the same thing. There’s some play in the connection. (there shouldn’t be) Hence why you should be getting the unit replaced (if you’re still under warranty).

Contacting support@anovaculinary.com is better then getting into a pissing match with other members of a forum message board. Just sayin’.

I have contacted support several times about my unit beeping a lot. I did the things that they suggested - hair dryer, drying it in rice - nothing has worked. They wanted a video sent, and I tried, but it was too long or big to send. They wouldn’t help without the video. So much for supports help.

They emailed me about my purchase information, which I sent last week, but I haven’t heard anything since.

What was your ticket number with support?

Judy, why don’t you just edit the video to include specifically what they want to see, and/or save it at a smaller resolution? There are quite a few free ways to do this.

(My personal preference would be “Handbrake”… https://handbrake.fr/ )

@AlyssaWOAH,
My ticket number is 313947. I replied last Friday to Shiela’s request for information, and today I received an email stating that it has been almost a week since I spoke with Shiela, and wanted me to reply. I replied again, but who knows if you got it, as you didn’t get my message last week, so your system seems to be blocking my messages.

Yeah, I am not seeing any responses on your end. Looks like it didn’t go through. We initially responded on Friday. I’ll tell Shiela to email you again. Hopefully that works.

#- Please type your reply above this line -##
Hi Rich,

Thanks again for reaching out!

We’ve gone ahead and closed this request for the time being since we haven’t heard back from you. Don’t worry though, you can reply directly to this message if you have any other questions or need further answers! Here’s a refresher on our conversation:

Whomever is managing your email service should be fired.

ChefSteps, it looks like I’ll be paying you guys a visit.

I have no vested interest in either Anova or ChefSteps, just letting you know that ChefSteps customer service and problem resolution is not without their issues as well.