Stopped Heating and then Over Heated

Anova Support
Tarwin October 30, 2016, 4:28pm #1
So, just bought the Wifi version a couple days ago.  I have used it three times to test it out since I have never had or done Sous Vide cooking before.  Did some pork chops, some steak and everything seemed ok.  Then decided to do a brisket last night.  Set it for 155 degrees for 24 hours which a recipe on the app suggested.  Everything looked ok for the first 6-8 hours.  I woke up around 2 AM and checked on it.  The water was room temperature and the display showed that it was something around 323 degrees (or something crazy high).  I unplugged the unit and plugged it back in.  The display would only read 32 degrees.  I tried placing some hot water into the bath to see if the temperature would spike but it didn't.  I decided to see if it would heat up so I waited 30 minutes.  Checked the temperature with a thermometer and it read 155 degrees.  Thought I was good to go.  Went to bed.  Woke up at 7 AM, and there was a lot of steam coming off the water.  Went and checked it out.  The water was over 190 degrees.  I went ahead and pulled the brisket, and it was overcooked at that point.
Anyway, exchanging the unit today at the local store I purchased it from.  Wanted you all to have line of sight on what happened, so you could know.  My experience is pretty low at this point, but willing to give it another shot with some more trials.
acs October 30, 2016, 5:22pm #2
It's made in China, what do you expect?

I’m thinking that your unit got overheated by steam coming from the bath.  Did you cover the bath?

See the vents at the back of the top of the housing?  Steam can enter there and play havoc with the electronics.  I noticed that a couple of times when I was using something similar to cling wrap to cover the bath.  (I eventually got a hole saw and cut an opening in the container lid for the PC to sit in)  Now it can’t be affected by the steam at all (in fact, my Cambro container’s pretty much sealed now, so there’s next to no evaporation at all!) 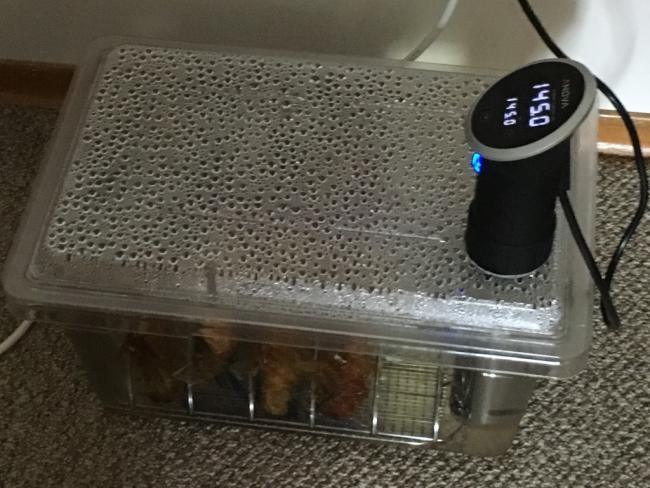 If that’s all it takes to make one of these go bonkers, the design is absolute shit and they should fire their mechanical engineer.

Interesting. I was using a stock pot for cooking, and didn’t cover it. Although it got pretty cold in the house and there was a window open all night close to the unit. There was a lot of steam coming off the surface of the water. Maybe that effected it. I saw your post on another thread and did order a similar container as the one you have. I noticed that they make containers and lids just for this cooker.  Before I invest in that though I want to make sure that the second one works as intended. Thanks for the advice!!!

Just had the same problem. As explained below my problem was steam getting into the unit also. Blew it out with a hair dryer on cold setting. Back to working perfectly. Will be maker a cooler with hole for the cooker.

Second issue - I am trying to use your app. It has downloaded but does not open. Can you help?

If that’s all it takes to make one of these go bonkers, the design is absolute shit and they should fire their mechanical engineer.

How I love those beeps… Anova Support

Yes, that seems to be the only option. (I’m not worried about electricity consumption. The savings due to insulation are not worth it, IMO: Sous Vide Koozie - anyone tried it?) Sad, isn’t it, that I have to use a special container with a lid to stop the beeps: The Anova is designed to be attached to a pot with the clamp that comes with it. The Anova’s job is to heat water and to keep that water hot. Hot water emits steam. The Anova, by design, sits directly above the hot water. The Anova ha…

I see it too. I’ve just had the same problem - I had a 24 hour recipe and after 18 hours it stopped working and I saw there was steam in the display. I covered the bath with cling film but obviously that wasn’t enough.

I’ll be sticking to cooler temperatures and shorted cooking times