I have Anova Wifi version. Let’s say that I want to use Bluetooth connection instead of Wifi, how do I do that? The App automatically detects and connects to Wifi. And there’s no menu to change the type of connection in the app or in the unit ( manually). I don’t want to use wifi while the unit is just 1 meters away in my small kitchen. Please help!
Thanks.

Hey! Have you tried turning off WiFi and enabling Bluetooth on your phone first? I also have the wifi version - it’s usually able to pick up Bluetooth if I do this. Let me know if this works!

thank you very much. I will try this method and will let you know soon.

Dear Alyssa,
I tried your suggestion: turning wifi OFF on my phone, only bluetooth is ON. My phone does not detect the ANOVA unit, even though it can detect all my other devices (BT speakers, Macbook, PC, etc.) I also opened Anova app. It showed me only WIFI symbol and tried to connect to the unit via wifi. Why there is no Option menu that let users to choose either wifi or BT? Please, need help. Any one?

If you did succeed in getting the unit to use only the WiFi connection you would have to reconnect it to WiFi next times you wished to use WiFi. At least this has been my experience when cooking with the unit away from home where there has been no WiFi coverage. On my return home I had to reconnect it to my home WiFi network.

I have to ask…why do you care if you’re using wifi or bluetooth? Seems a rather silly requirement to make to toggle this whenever you like.

You actually haven’t stated if you’re using iOS or Android. I’m going to presume you’re doing this on an iPhone as you mentioned you have a MacBook, but I could certainly be wrong.

You should have both Bluetooth as well as Wifi (on a 2.4GHz band) enabled on your iPhone when you do the connection setup in the ANova Culinary app. Both wireless protocols are paired with the device during this setup. Current version of the iOS app is 2.1.1.

If you go through the steps (and don’t skip any of them) during setup, then either is available for the app.

If you really want to just use Bluetooth when you’re in your kitchen, then you have to turn off your Wifi radio on your iPhone. (this has the disadvantage of forcing all data needs of your iPhone to use your cellular data connection).

The Android app should work the exact same way, but I can’t verify that.

It appears that the APC will always use Wifi if it’s available (makes sense, as that’s how it’s able to have the connection to ANova’s cloud), but it will switch to bluetooth, should wifi no longer be available.

If yours is the current version of the app and is NOT working this way, then delete the app, redownload it and reinstall it from the app store and do the pairing again (making sure both bluetooth and wifi are enabled before you do so).

@AlyssaWOAH - now HERE’s a question you can take back to your development folks. Why, if I turn off both cellular as well as Wifi does it tell me I must enable one or the other before using the app? (if someone’s in a cellular dead zone, why not just let them use bluetooth…but give them a notification in the app that some features aren’t available…or disable those features entirely).

@fischersd I have the Android app - it works the same for me as how you described for the iOS. I just turn off my WiFi radio on my phone to use Bluetooth. When you mention cellular, did you mean Bluetooth? That last bit was a little confusing.

If you have both cellular (carrier) as well as wifi radio’s turned off, the app will only complain - won’t connect to the APC.

There really shouldn’t be a requirement to have a data connection to use it - just disable the functions that need to download content. People should still be able to control their APC regardless of having a connection to the ANova cloud or not.

I understand thinking to do that from a security standpoint, but there are circumstances where the owner may not have a data connection yet want to use their phone to control their APC.

Edit: Scratch that…now it’s working. Odd…it wasn’t allowing it. The area (ribbon) that you would normally use to start the APC was blue and stated to restore cellular or wifi data before proceeding.

Aha! Recreated it. It doesn’t do it if you haven’t setup the wifi connection. Once you’ve created that cloud connection, the app insists on attaining it before allowing you to converse with the APC. 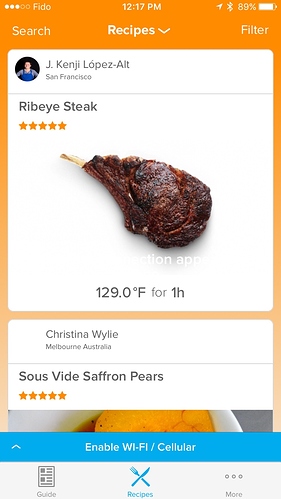 Hi everyone,
Thank you so very much for all replies and discussion.
In my case, as at one point mentioned by @fischersd, i have the case of “someone’s in a cellular dead zone…” (my backyard kitchen, home wifi already weak/non-existent, cellular connection (provider coverage issue, i guess) is also week). So, to quickly connect to APC using bluetooth seems to be my best option.

Anyway… After reading all replies in this forum, I decided to try some options from my phone (Android and iPhone). My best option so far is just to refresh my cache, so that the app start as if it is newly installed, which then give me the option whether I want to start with bluetooth or wifi. Once I establish this, next time, the app already have bot options available (depend on which connection I turn ON on my phone, BT or wifi).

So, happy cooking for you all. Stay happy, stay healthy and happy!