A while ago I was talking about how I missed a deal on beef brisket…once, because I was already overstocked, and again, because I found some that was already passed the sell by date, and when I mentioned it, they just pulled it and said sorry.
Anyway, both times, it was marked down to $2.25 a lb… Which I don’t know about your neck of the woods, but around here, that’s cheaper than ground beef.
So today, I stopped by the Walmart family market, just for a few Nik naks… And I found 4 whole beef briskets marked down twice already, with a sell by (freeze) after today date… for $1.78 a lb ! All four were in the $24 range. So I grabbed the best looking one.
Sectioned it up into 2 nice big hunks of flat… 1 roast looking piece, 1 small piece of flat, and 1 beautiful piece of beef point… So basically 4 good SV cookings 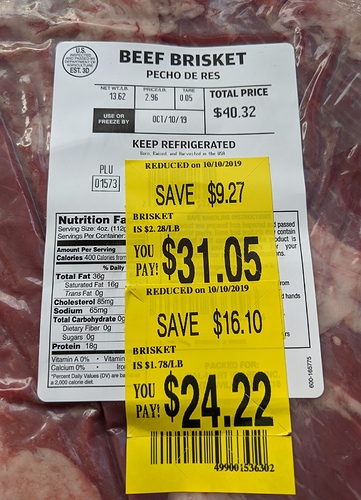 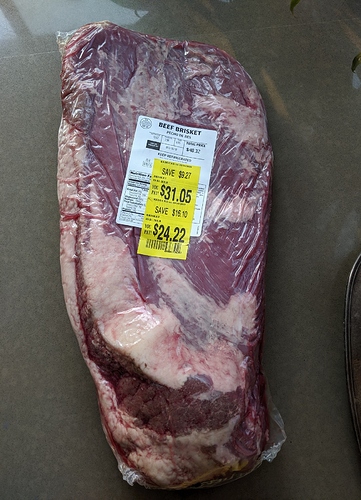 Lucky you. Even your normal price for brisket is dirt cheap as far as I’m concerned.

Ya know Ember, I’ve mentioned this before, but I have a theory…

While most everything is more expensive in CA, especially gas, and taxes ! I think places in the mid West, like Texas, have a lot more hard core BBQ’ers. So a large majority of the people in the mid West no what to do with a brisket ! Not so in Cali.

So it becomes a supply and demand thing. I’ll be honest, if it were not for SV, I wouldn’t be buying Brisket, or Tri Tip either.

But anyway yes, even for choice brisket from Sam’s club, it’s only like $3.35 a lb

Yeah. The American beef industry is heavily subsidised even on home soil. Not so here in Aus. Even brisket tends toward AUD 20 per kg mark or around USD 7 per pound.

But Ember, I don’t think this price is “completely” to do with subsidizing. As I say, I know that there are other parts of the US where Brisket is a lot more popular for pro BBQ’ers and in those areas, it might be closer to $7 a lb… at least $5 or 6…

That’s a great price, I live in Alaska so I probably end up paying 20% more on average. Then again, most folks up here prefer fish or game meats like elk and moose.

Only 20% more is still not bad. I’d like some moose and elk too, if I had that option

I only tried moose once when i was in the Army posted to Canada for a while. I wish they
Had an Anova It was awful, never had it again. Not often hanging outside BUTCHERS IN Blackpool UK

lol Well, I would imagine how it was cooked would make a big difference.

With wild game meat habitat is very important. In areas with coniferous trees the flavour of the meat can be just horrible if you are accustom to grass or grain fed animals.

That makes sense. Fish can be the same way. In my area, we have Sturgeon out in the bay, in relatively clean water, feeding off of a clean bottom, and those taste great ! But after they come back into the muddy sloughs, they start tasting pretty muddy… We are what we eat, I guess

Not at all, that’s only where they allow soldiers so they can perpetuate that belief when they get back home.

Were you stationed on a base?

Nope, we have plenty of non-conifers. After all, the symbol on our flag is a maple leaf, not a pine cone. This is an especially wonderful time of year as the leaves are changing colour and can be quite spectacular.

As for moose, I guess I’ve been lucky. I’ve had it several times while on business in Newfoundland and it was always delicious. Especially the moose sausage.

LOL that is how i tell everyone about Canada, I was on CFB Gagetown with the army but went all over the place. I have a friend From here( Blackpool UK) living now in Barrie, Ontario who we visited many times to sit at there cottage on an island (rocks and fir trees).Her husband was from Nova Scotia we went and to Newfoundland.