Yoghurt propagation or yoghurt made with yoghurt

2b. Follow this step if you if you don’t pasturize the milk yourself. Just heat the milk to to 43℃/109℉ in the pan with a thermometer in the milk and constantly stirring while heating. Take the pan out of the heat as soon as the thermometer indicates 43℃/109℉.

You must use a live yoghurt if you’re going to use commercial yoghurt as a starter culture. Look for plain yoghurt only. Non plain yoghurts tend to be very high in surgar which may impact the culture growth.

There are different strains of yoghurt culture out there. Look for words like ‘pro-biotic’ and ‘pot-set’ and of course, ‘live culture.’

Greek style yoghurt is usually live, but it a high acidity yoghurt which is not for everyone. Greek yoghurt is traditionally drained of some of its whey. The whey can be used too.

Yoghurts which say ‘pot set’ on the label usually contain live culture (make sure there’s no gelatin listed on the label). Not all ‘pot set’ cultures are generational. So, the yoghurt may work well first time and become weaker in each subsequent generation.

Temperatures between 105 and 109 are good for warm culture yoghurt. There are room temperature cultures as well, but I’ve not come across them in regular commercial use. Health food shops may have starter cultures available.

Using a full fat milk will give a firmer set. I’d suggest 8 - 12 hours for good culture establishment. The longer the culture is left to breed the better the yoghurt set will be, but the higher the acidity in the end product.

No need for the ice bath. Just put it straight in the fridge. Suggest at least 18 hours set time before consuming.

When using your yoghurt, always leave 2 tablespoons of the current batch to start the next generation.

Thanks Ember,
Those are some very good tips. I think it also could be that on you side of the big pond, more (and/or other) yoghurt cultures are commercially available than on mine. Maybe this recipe is just for the one yoghurt culture commonly found in the Netherlands (always live and fresh, however never labeled with the words you mention). But ok, lets agree on America 1st, NL 2nd

O, and the reason for chilling the pots before putting them in the fridge is not to spoil the rest of the contents of the fridge…
Thanks again,
Paul 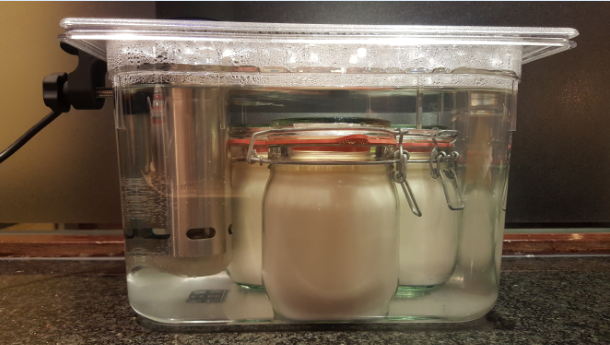 Most of the commonly used yoghurt strains started in Europe. They are available as starter cultures, but might take some searching. Their common names for the cultures tend to be related to their country of origin. The lactobacillus used for Greek yoghurt is a different strain from that for Bulgerian yoghurt.

I believe the Bulgerian strain (Lactobacillus bulgaricus ) has become the more commonly used for commercial produced yoghurt, at least for the flavoured yoghurts, because it produces a ‘sweeter’ yoghurt. I actually bought my freeze dried Bulgarian culture from Bulgaria.

Ambient temperature strains, like filmjölk from Sweden are most likely to be found outside Scandiwegia in cultured butter. I think the Swedes traditionally used it for a drinking yoghurt.

OK. Surprised you don’t see those labels on things. They’re used here a lot to attract the healthier eating oriented shoppers. Of course, they tend to come with a slightly increased price tag. The real premium prices though are found in the health food and whole food shops where some proprietors are able to tell you what type of yoghurt culture it is. The really involved ones will probably introduce you to each individual little Lactobaccilus by name.

Sure, an ice bath isn’t going to hurt. But 105F really isn’t going to put the rest of the food in the fridge at risk either. It’s not much warmer than it leaves the cow at.

Just a thought…why use a pan at all? You could pasteurize your milk in the jar using the anova, then let it cool and do the next step at 43°C straight away.

Well you could do that, but pasturizing the milk will probably kill your yoghurt culture so you’d have to wait for the temperature to drop to a yoghurt safe level, reopen all jars, put in the yoghurt, stir… In my kitchen it’s easier to use in a pan…

Well, your first post did mention letting the milk cool first (step 2a). I personally don’t see why you can’t start in a jar, then put the jar in cold water to cool it, then add the yoghurt, and go from there.

But well, to each his/her own.

You’re right., do what works best for you. With one jar that’s probably what I would do too. But I cook three at the same time…

I’ve found that yoghurt made with commercial yoghurt only is good for one generation ie you can’t use your yoghurt to make the next batch. I’ve gone to getting yoghurt cultures (which may specify a temperature different from what’s given here).
The other thing I do is heat up the milk to scalding in the microwave: fast and no need to stir!

Because the sudden change in temp could cause th glass jar to shatter. I put mine on a cooling rack for about 20 min then move them into the fidge.

Sorry, I’m used to borosilicate glassware, so that didn’t even cross my mind.

rapid temperature change shock can happen with any glassware, it is just less likely if you are using canning jar glassware. I have been using canning jar glassware since I got my sous vide machine and they work very well. I have been making Yogurt with my sous vide machine for at least a couple of years now. It has gotten to the point where we won’t eat off the shelve yogurt (very sweet and the filliers they add are just nasty, if I make it I know what is going into it).

Something most people don’t know is that yogurt is good for you if you pick up food poisoning because the good bacteria that you introduce helps fight off the bad bacteria that is in your system. Cuts recovery time down by a few days in most cases.

I love yogurt and the SV stick is perfect for that. My thoughts on your method:

The fat content of your starter yogurt doesn’t matter.

You heat the milk in a put briefly 82℃. I would put the milk in a metal container and use the SV stick for that. It’s more accurate. May take a bit longer though, but you can walk away, it would burn.

After that I let the glasses cool down a little and then they go into the fridge.

There is no risk of any glass cracking, the temperature difference is too small for that.

BTW, if something goes wrong (yogurt stringy/slimy) do not throw it! I freeze it and whenever I make bread I put it that yogurt. It makes the inside of the bread softer and it raises much better. Unfortunately with the SV stick yogurts seldom go wrong.

I personally wouldn’t use any sous vide stick in any liquid but water.

No one is advocating using the APC directly in the yoghurt. The yoghurt is in a glass jar within a water bath.

Heating the milk to 180 degrees F and holding it there, for 20 minutes, doesn’t just pasteurize it. It also denatures the proteins, so that the bacteria beasties can more easily process them.
Those beasties will die at 118F or above, so keep the temp at 110F.

I bought a smart pot so I can make a gallon at a time. I have used many ways to make yogurt and this is the best way I have found. I go with the temperatures above. The one thing I add is 2 cups dry milk at the start so as to be thicker yogurt. Use 4 T starter from last batch

BTW, cooking milk for protein breakdown is useless when you use UHT milk. It was already done in the factory.

Stringy/ slimey is def a culture problem.
I gave up on keeping my own culture because it is too easily contaminated with yeasts & molds from the air.

Now, I use commercial cultures that come freeze dried. Where I live, (Montreal, QC, Canada), I can buy thesame box of 5 cultures in the grocery store or health-food store.
Never had a bad batch of yoghurt from them.

Good luck with the little beasties.

I did use the Anova to bring my milk up to 180 F in a couple of liter sized jars. It worked fine. It just took a long time to heat up and then cool back down. The whole process of making yogurt takes a really long time to begin with, so I’ve abandoned that practice. If you are just hanging out and have other things to do while the milk heats up, I’d say it’s definitely a less messy and less hands-on way to do it. Plus, I’ve heard that holding the milk at the higher temperature for 30 minutes can make a sturdier yogurt with more body. I haven’t tried that but the Anova would be perfect. I’m certainly not going to stand over a pot and try to regulate the temperature for half an hour! I also tried bringing the milk up to 180 by sticking it in the microwave in liter jars. That worked too and was much faster. In both cases, I cool it down, add the starter culture to the same jars and finish making the yogurt without having to pour hot milk back and forth between the milk pot and jars. I like it much better that way.