Just received a Precision for Christmas… Seem to be having the issue with the app keeps asking for the 4 digit code. I tried an iPhone 11 and iPhone 8 Plus. Tried connecting my phones to both the 5 GHz and 2.4 GHz networks, resetting the app, re-installing the app, changing wifi password, standing on one leg, etc… No luck… Grabbed my Android tablet and go figure it worked straight off the bat. And it WAS connected to my 5 GHz network. Problem is I want it to work on my iPhone. Suggestions?

i have the same problem. i cannot get it to connect to my iPhone 11. i’ve done all the things you have done and it just doesn’t work.

Did you get an answer?

Hello. Yeah, believe it or not I rebooted my phone and seems to work fine. Go figure the old “have you rebooted lately” is a real answer. Lol

I too have the same issue. A new anova precision cooker pro… worked manually at first, then decided to connect it to my newly downloaded app…got as far as requiring a 4 digit pin…nothing! the whole screen is just locked up on cooker and app isn’t connected. I tried unplugging multiple times. Deleting app, reinstalling app etc…
Very frustrating. I have an iPhone 6. Thing is, anova do not have any online help issues for this problem neither?

The same error, I had an iphone 11 pro, and a new anova precision cooker pro. the pro can work manual by touch the screen, but when I want to use it with the ios app, the ios app tell me pro need to be upgrade. but for an hour later ,nothing finished. and be block in the 4 digit pin.
I had already spend more then 6 hours to try , try to create a new wifi with 2.4G( orgi wifi is both 2.4GHz and 5GHz togther),chang iphone 11 pro to my old iphone x and iphone7 plus, uninstall the ios app and reinstall it, reboot the iphone ,nothing change.
I had send a email to the support, and not replay now.
is there anyone who can help me?

Have you solved this problem? It’s probably an engineering error, but they won 't admit it. I have the same problem but with android.

I had this issue recently on my iPhone and got round it by turning off the “auto-join” option for my home network.

Then I performed the connection to the Anova, I “assume” the phone is rejoining the home network before it has the chance to establish the connection with the Anova to perform the setup

Once through the Anova set up process I turned the “Auto Join” option for my home network and everything was all fine from then on. 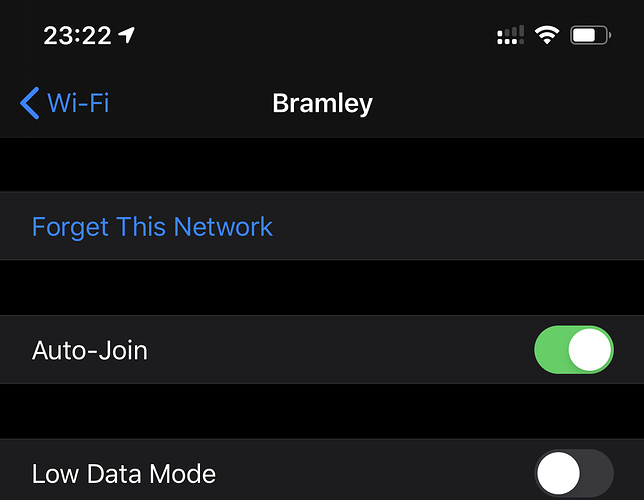 Give that a go

Welcome @kuksik there may be a similar setting on Android, but sorry I can’t help you there as I am an iPhone guy.

In my case, the phone connects to the device but does not see the network. There are a lot of negative reviews on google play about the same situation, but it seems that anova ignores this problem.

@kuksik that is different to what I was seeing on iPhone, so looks like a different issue. Sorry I can’t help, I don’t know Android very well.

I’m having the same WiFi connectivity issue. iPhone 6S plus, latest IOS, latest App version. When I try to connect, I receive message to turn on bluetooth, but my Avova is WiFi NOT Bluetooth. I can see the Anova and 4 digit code as a new network on my iPhone, but when I try and connect it asks me for a password and the 4 digits don’t work.

UPDATE 03/18/2020. Finally got my Anova Precision Cooker to connect to iPhone. The Anova instructions are awful and the App is poor. My problem is that when connecting for the first time, you are given several selections of various models. I was selecting the “WiFi or Bluetooth” since my cooker has WiFi, however that product is the incorrect choice. It kept asking to turn on bluetooth setting on the phone. My cooker is WiFi only and that didn’t make sense.

I scrolled down to the “Precision Cooker” model which I didn’t think was correct since there is no mention of WiFi in the description, and voila it asked me to enter the four digit code. I held down the target temp button for about 5 seconds and the code displayed. I typed it into the app and the app immediately searched for networks in my house. I selected a 2.4GHz network, entered the network password and all was good.

I have the iPhone 6S plus on the latest IOS. I turned the Auto Join network option off as suggested by someone earlier in this thread and all was good.

It is counter intuitive that the newest model of Precision Cooker that has WiFi enabled, is simply called Precision Cooker in the app with no mention of WiFi. Especially considering there is model option called WiFi or Bluetooth which isn’t the correct one. Go figure…

Anova needs to be more specific with their instructions.

Does Anova never reply to these issues???

No 3x, they do reply but not here on COMMUNITY which is a mostly unmonitored information sharing forum for Anova users.

Users with product problems report here being satisfied with the results of their contact with SUPPORT.

Connectivity matters appear to be a persistant challenge.