I have been looking at the Anova Precision Cooker for a little while (not the nano) and all of a sudden it seems to be out of stock at a lot of places?

Is there a new model imminent?

For what it’s worth I’ve heard no rumors of a new model, and the Nano was talked about for ages before it was released. I’m not surprised that it’s out of stock at a lot of places. I know quite a few people who’ve purchased Anovas in recent weeks.
I have both a WiFi unit and a Nano (I bought the Nano November 2018, the WiFi November 2017). I’ve been happy with both for different reasons, though if I had to choose a favorite it would be the WiFi. It’s simply more flexible. Good luck with whatever unit you decide on!

We’re just a bit short on inventory on the older Bluetooth model, especially coming out of the holiday season. You should still be able to find our Wi-Fi cooker in our stores and retailers

Is there any chance that Anova will have a full size Anova Precision Cooker without bluetooth or wifi? That’s really what I am looking for. The closest is the 800w bluetooth only version but that one seems to be discontinued?

Just buy either Anova and don’t use the networking functions. All Anovas can be used manually. Just because the connectivity is there doesn’t mean you have to use it.

All of our cookers are connected, but all of them can be controlled manually, just as @Ember mentioned.

All of our cookers are connected, but all of them can be controlled manually, just as @Ember mentioned.

Alyssa All the cookers are connected? Can you post instructions for mine? 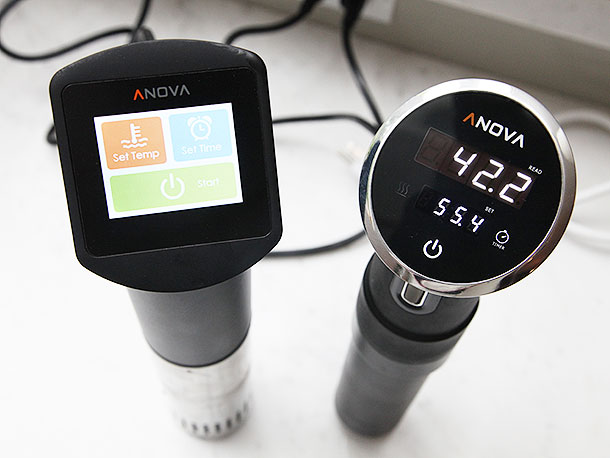 Well, except for the ones that are discontinued lol.

Thanks for replies. I understand I can just ignore it.

Just as feedback, I don’t see the value in the connectivity and would rather not pay for it or have it there as another thing to break. I think there is room in your lineup for a device that doesn’t have connectivity. I would get the nano to get BT only but I need something with a clamp that I can remove. Ideally the pro version without the BT/Wifi.

@sousvideguy I do a lot of long cooks with mine and 2 things that I would like to have if I were able to connect.

I carry my timer with me so I can refer to it no matter where I am. I also plan my cooks to start on the hour or half hour so it is easy to remember the stop time as a backup to the timer.

Thanks for replying, I hear you. My cooks are typically shorter and attended but I can see how the two things you mentioned would be helpful for longer cooks.

Hopefully Anova will consider the feedback.

Everyone wants something different and it’s impossible to have devices that perfectly fit every want.

Quite frankly most of the negative reviews I have read refer to connectivity issues.

There generally would be no savings. It’s less expensive to manufacture and maintain a smaller number of specifications. If they made a smaller number of non-connected units, they’d probably cost more. Also the cost of putting WiFi and BT in the units is pennies.

Also the cost of putting WiFi and BT in the units is pennies.

This is factually incorrect. To have wifi and BT support, you need a processor that is powerful enough to run a TCP/IP stack. In practice, that means an SOC that can run some version of embedded Linux. That’s a far cry from a simple micro-controller that is just smart enough to monitor a handful of buttons and operate a 7-segment display.

The cost difference is measured in dollars, not pennies. On a device that costs $100 retail, $2 in manufacturing cost make a big difference to the bottom line of the manufacturer.

Somewhat agree - but if you are going to do it - do it right. Complimentary App needs far more development.