Best way to sear your meat after SV

The only thing I disagree with, is that the torch is super practical and easy. Mine stays hooked up to our 20 lb propane bottle all the time. I walk out with the meat, turn on the gas, hit the auto sparker, and my meat is perfectly seared in about 2 minutes. Turn off the gas, and walk back inside to serve dinner

Hey one thing I wanted to add…
I’ve heard a few people here or there say that using a torch made their food taste like fuel, but I’m almost certain I know what their problem is… “IF” you try to be wimpy with this torch, and keep the gas turned really low, it will produce a weaker, yellow flame. This means that the fuel is not completely combusting, and yes, this would likely make your food taste nasty.
If your going to use one of these torches, you need to crank that baby up to at least a moderate level, so that the flame turns almost completely whitish blue. Honestly, it should almost disappear in bright daylight. Now, it will still blow yellow flames all over the place “when you start blasting your meat with it” but that is from greases and fats burning on your meat. When you pull the torch away from the meat, it should go almost completely invisible again

Oh also, your torch should be about 12" away from your meat to give the fuel a little space to completely combust. The hottest part of the flame is not right at the torch, but rather, out about a foot from it. This is the part of the flame you want to sear with.

And BTW, yes, at a medium high setting, these torches are a little loud, and intimidating ! You need to either be a man… Or act like one, for the few minutes that it takes to sear your meat

Simply not a practical solution for everyone.

And Guga says the same thing, but I don’t get that ???

Anybody can get one of these torches for cheap. Then, either use a small attachable propane bottle, or a large one with hose. We already had one for the BBQ, but even if the BBQ was not propane, I saw these bottles at Sam’s club for $30 And you can fill one of these and probably sear like 100 meals for $20

Anyway, I walk out with my SV’d meat. Toss it on the grill, torch it for a couple minutes, and it’s perfectly seared.
Just can’t imagine how it could be more practical ? For anyone… 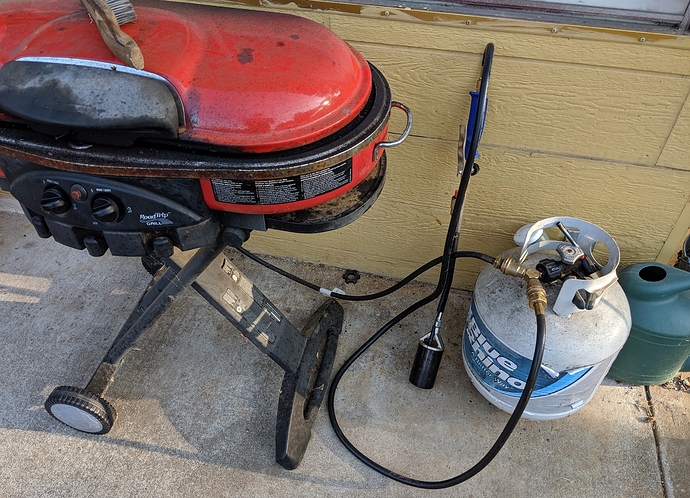 Can’t be used on Total Fire Ban days and restricted as to where it can be used during fire restriction times. This could actually mean it is not able to be used for up to 6 weeks of the year depending on your location in Australia.

Also, not everyone is able to, or even wants to, take everything outside for finishing.

Hmmm. Not a concern here in Sacramento, CA. We have a green watered back yard. You couldn’t catch it on fire if you pointed the torch right at it.
And no house restrictions either

BTW, not only don’t we mind taking the meat outside for searing, but much of the time, we would rather eat outside too .

And hey, this just popped in my head… I saw a video last week where a guy took his brisket out in the garage, and used the same torch I have, to sear the meat on a rack on his garage floor. You do have garages in AU don’t you ?

Yeah, sure. But it houses 2 cars and bunch of other stuff

Really. I am so completely not interested in your flame thrower solution. It’s an overkill blokey solution. Carbon steel/cast iron and searing skill work just fine.

It is the best, easiest solution

Just out of curiosity, have you ever been accused of being stubborn and opinionated ? I have

BTW, it’s not just you Ember. A lot of people seem to be just completely thrown off of the idea of searing with a flame thrower. Last night, I asked my GF why she thought this was, and she said, “Maybe they are scared of it”… So I told her, “Maybe they should grow a pair”

There are many ways to get a good sear. Many people here live in apartments where cooking on the balcony is not allowed at all. No need to argue or be misogynistic about it. As with most things there are many ways to sear a piece of meat. I personally like charcoal and I have a tiny Green Egg knock off that I will use on occasion. I can shut the dampers and the fire goes out allowing me to use the charcoal many times. Again not for everyone just another option.

John, your absolutely right. And I agree, living in an apartment, would make torch searing problematic at best. Also, I would have to imagine that charcoal would impart an awesome, smoky flavor to the meat… Although charcoal was one of the contenders in the SV Everything challenge. Don’t remember where it placed, but I think it was also towards the top

I still like using a little coating of mayo on the beef before I lay it onto a hot dry cast iron frying pan, coat the other side, flip it over and then serve.
It probably takes less time than it does to do with your blowtorch Chris and I don’t have to take it outside to do it or risk burning the house down

Completely agree with your assessment. I have the same setup and have been using my flamethrower for over a year—even when there’s snow on the deck! Sounds like a jet engine!

Seriously though, the torch is really fast ! I’d say it takes less than 2 or 3 minutes to sear a Chuck roast, or a couple of steaks.

Not sure why all the resistance to torches, but geez, they sure do work great !

Alternative that is not as extreme, and very effective:

I use a BernzoMatic BZ4500HS. It’s identical to the Sansaire torch (except for the colour and the lack of an over-inflated price). The BZ4500HS has a wider flame than the TS8000, so it works better for searing. For gas, I’m using MAP/Pro (propylene), mainly because it burns a bit hotter than propane or butane. It’s also what is recommended by Modernist Cuisine at Home. (Good book, BTW, if you want to try some fancy and technical kind of cooking.)

Fear of the unknown!

Hey Michi, I actually used something along the same line as the torch you posted. It worked, but took much longer… And I know this might sound counter intuitive, but because it was so much weaker and smaller, and took so much longer, I feel like it gave the meat more time to increase the inside temp, and more time to dry out.

Now, having used a real torch, I wouldn’t even consider using the little dinky one again.

It takes me approximately 2 minutes to sear a steak with that torch, which I find adequate. A flamethrower (weed burner) will probably produce a larger flame, so the advantage of that would be that you could sear two steaks side by side simultaneously. Personally, I don’t have a need for that

My mother-in-law used to say, “There’s more ways to kill a cat than to choke it with butter.”

My preference is to sear meat having flat sides (like steaks) well dried and brushed with a little avocado oil, on a cast iron skillet. For irregularly or round shaped meat (like roasts) I prefer the flame thrower – drying and oiling not necessary. A blisteringly hot charcoal or propane grill will do for either. The important thing for me, whichever method I choose, is to get the job done quickly before I inadvertently cook more than intended… The hot spot of a Searzall is too small to sear quickly.

My first trial of the weed burner ignited paint on a metal grill. Now I use a camping type ridged cast iron griddle, sitting on a small metal stool in a gravel section of my back yard, and keep the torch about two feet away from the meat. Those who don’t have a suitable non-combustible area are wise to be cautious.

Yea, I’m glad I didn’t waste money on a Searzall. At one point I thought they were the best, based on the fact that Guga always uses one… Then, even in his own “Meat searing challenge” he proved that the torch was better than the Searzall, and in fact, was the best period, as it won the challenge