As a very big fan of Sous Vide I have become concerned over cooking in plastic bags. I wanted to switch to cooking in a glass container, like perhaps Mason style jars.

How do the cooking times need to be adjusted? Does anyone have any experience with this?
happysundays September 18, 2016, 10:35pm #2

I can see two issues here. The first is that glass is an insulator and so it would take much longer for the temperature to rise inside your jar which was itself inside another container. The second is that the Anova measures the temperature of the containing vessel. This is normally assumed to be very close to the contents of the (food safe) plastic bags, however in this case it is not the case for a glass jar.
The short story is - it might work ok, but you’d need to do some testing yourself with a second temperature probe in the jar to see how much extra time it takes to heat its contents. You’d then have to add that time onto the recipes…
1 Like
acs September 18, 2016, 11:15pm #3

Also add that a mason jar is going to be hard to fully evacuate and the resulting air space might cause issues / uneven cooking with some foods.
1 Like
AngelArs September 20, 2016, 8:06pm #4

Personally I do not think there is such a thing as “food safe” plastic bags - when used in a heated environment. All of the research I’ve completed in this area, and all of the people I’ve talked with regarding this issue (many with doctorates in biochemistry/pharmacology/neuroscience) have led me to this conclusion. Having said that I do not wish to give up cooking Sous Vide, and simply wish to find a safer method to do so. I think you are correct in saying that I simply need to calibrate the glass container, which should be easy enough to do. Thanks.
@acs
Actually vacuum sealing the glass jars is very easy to do but I am also studying other materials/methods, and I am fairly confident that I will discover a safe way to cook Sous Vide.

Yeah, now that you mention it, I just remembered I have one of those vacuum attachments for evacuating mason jars.  Tried it once or twice, it worked to some extent, but without a way of measuring the pressure inside the jar, I don’t know how well it did.

Best of luck in your endeavors. I’m sure there are other people out there who are looking for something similiar to what you are after.
1 Like
Helen September 21, 2016, 9:48pm #6

Considering you probably won’t be cooking for hours or days in glass. The time should be fine. Do not need to calibrate IMO. Many recipes for sous vide custard for example in glass jars.  Can’t see doing a steak in a glass jar but if that is your wish go for it. Would not look that good or be as easy to brown IMO but interested to see how it goes.

I have tried cooking scrambled eggs in glass and the time was extended considerably. It did work, however. What I might suggest that you take a look at are silicone cooking bags. They are evacuated like a zip lock. A little time added but they work pretty well.

I use vacuum sealed bags for most things. Most of my cooking is below 150°F so I do not worry too much.

Glass containers work great for food that has liquid as a major component. (Flan is awesome!) Think of doing canning except it's really cooking for immediate use rather than for long term preservation and the food can take the shape of the container. A plastic container can conform to the shape of the food. Each has a place in Sous Vide.

Also don't get hung-up in the "vacuum" thing. We're really just evacuating the air/gasses to ensure even cooking. The process uses a vacuum but the actual vacuum is unimportant.

Hi AngelArs, I too have concerns about heated plastic coming into contact with food. I’ve been searching the internet trying to determine if wrapping the food in unbleached parchment paper before sealing in a reuasable silicone bag will be safer. Any PhDs out there willing to weigh in?

Cooking in glass jars is actually really easy. The jars need to be pretty full, and you need to leave the jars unsealed enough to let out expanding air and water vapor. The website chefsteps.com/gallery has many examples of cooking in jars, and instructing how to do it right.

I have had good luck with 8oz jars. The lids are put on finger tight, that is don’t use your thumb to tighten. I use it for liquids like custards. I am not sure it extends cooking time on an 8oz (1 cup) jar, but I expect a larger jar should be timed like a thick piece of meat.

Were successful in using Sous Vide cooking using a Mason jar as a container instead of plastic?

If so would you describe your successes and failures?

I did not find any helpful links inchefsteps.com/gallery to address this issue.

Here are my hints for jars.

Only finger tight. Hold the jar with one hand, twist the top only until it resists. Don’t crank it down tight. It has to be able to let air out. Water doesn’t get in at this tightness.

Make sure the jar outside is CLEAN. That includes the threads and the top edge of the jar. The lid should not touch the contents.

I use a combination of very long tongs and a slotted spoon to get them out. I cannot grip the tongs tightly enough to lift them reliably. I get the spoon under as soon as possible and do the lifting with that and the tongs for guidance.

Hey @dardds, as @RichardOL, finger tight is tight enough. This will make sure water doesn’t get into the jars, but it’ll also allow air to escape. I’d also suggest checking out this blog post about using jars for sous vide.

For just over $5 US you can get a great set of tongs for lifting the jors from the bath. THey are intended for canning but perfect for here as well. 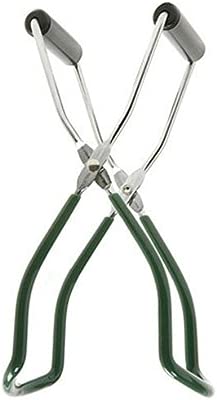 I don’t know if this is the right section to ask this but I’ll take my chances anyway. Does anyone ever tried infusing cannabis on their food? I have read many articles suggesting that cannabis has a very potent effect when it comes with pain and inflammation like this strain on https://blimburnseeds.com/cannabis/original/feminized/grizzly-purple-kush-auto. The reason for this is that I dont smoke so mixing it with food seems a good idea. Any personal experience or testimonial is highly appreciated.

Can you make a new thread/topic with that question?

Meme378 - This thread is about GLASS not GRASS.

I’ve successfully cooked meat in glass. I used Mason jars and also I used a jar with a wire clip lid. If you are concerned about air in the jar you could just fill up the air space with broth. (After all whenever you souse vide meat, it ends up swimming submerged in it’s own juice so why not use broth?) I didn’t bother to use broth because I reasoned that the air in the jar would take on the temperature of the surrounding water. If the surrounding water is at 130 F what difference would it make if the meat is in liquid or sitting in an air pocket for 12 hours? Time + temperature would take care of the cooking. I made sure that the tops were not too tight so that air could be expelled as the jar heated up. I placed each jar in a plastic bag so that the bath water wouldn’t leak into the cooking jar. I cooked the meat for 12 hours at 130 F. I looked like crap when I took it out ( like a biology experiment gone bad but hey, any time meat is cooked sous vide it always looks nasty). When I cut into the meat it was succulent and pink and juicy and no different from meat cooked in silicone bags. My next attempt will be to lay a piece of steak in a flat glass dish with a lid and enclose that in a plastic bag and submerge it in a souse vide. The steak will retain its shape laid out in a flat position instead of being squished and distorted in a jar and will be easy to sear.
If you use glass you will have to make sure you weigh down the jar with weights to make sure it stays properly submerged in the bath.