Do's and Don'ts Of Selecting Meat

A couple of days ago I had an epic failure in my pork chops.

Most of you gave me really awesome tips when it comes to choosing meat of quality that’ll give you a better sous vide experience. My first mistake was picking up low-quality meat in a hurry.

What are some other things to look out for when choosing meats?

If you can, shop for your meat at a butcher rather than a supermarket. True butchery is becoming a bit of a dying art as much of the processing is done a bit hack and slash at bulk processing plants. Get to know your butcher. A good butcher will be able to guide you in selection of cut for purpose or source something special that you might desire.

Alyssa, - wait. We all can’t afford to buy the very best meat available. I’d rather buy the less expensive cuts of wholesome meat and compensate by employing a few easy techniques before cooking and enjoying it.

For pork, please brine it. You will be amazed at the difference it makes.

For beef steaks and roasts i always dry-brine to start. That’s liberally applying Kosher salt and freshly ground black pepper to all surfaces. Then place the meat on a cooling rack over a pan and refrigerate loosely covered for 24 to 48 hours before cooking.

Sous vide cooking further enhances your meat’s flavour and texture no matter your preference of doneness.

@chatnoir - I actually agree with you. I am very frugal, so often I try to find deals or meat on sale. Seems from my last post, the quality of meat may have been one issue. However, you brought up a great solution that doesn’t involve me dropping a big chunk of change - which is to brine the pork.

Also, since I am not totally familiar with brining, what’s exactly is a “dry-brine.”

Alyssa, i habitually practice frugality too using almost no processed foods, except dry pasta, and i enjoy using the least expensive cuts of meats and surprising my dinner guests with their superior flavour and tenderness. I have been successfully using sous vide techniques since the mid-80’s.

Plain old brine is salt and sugar dissolved in water. There’s lots of formulae available on the internet. I use a salt strength about the same as sea water. 4% salt by weight of the water which is then 96% of the solution. Sugar strength varies according to the product. None for beef, and about half as much sugar as salt for pork items. I particularly enjoy the added richness dark brown sugar yields to pork although i sometimes i use a blend of white and brown sugar. I always use sea salt or Kosher salt as they don’t have the anti-caking agents that leave a metallic taste in the meat.

A dry-brine is just that, - just a brine but hold the water. You probably call that a “rub” and you are correct, except rubs usually have the addition of a whole lot of other flavouring agents.

This weekend my local specialty meat boutique (Walmart) had certified Angus top sirloin cap steaks on sale at about US$4.50/lb, - one of my favourite cuts. That’s less than half the regular price here in Canada. I placed the steaks on a cooling rack set over a rimmed pan and generously applied coarse sea salt and freshly ground pepper to all surfaces and let them rest overnight. You can safely let them rest in the refrigerator for up to 72 hours. They will only get better. The steaks were tender and delicious done using my Anova for 4 hours at 128F and briefly finished on my gas grill set to high. They were certainly the equal of a better steak restaurant’s product.

Also, since I am not totally familiar with brining, what’s exactly is a “dry-brine.” 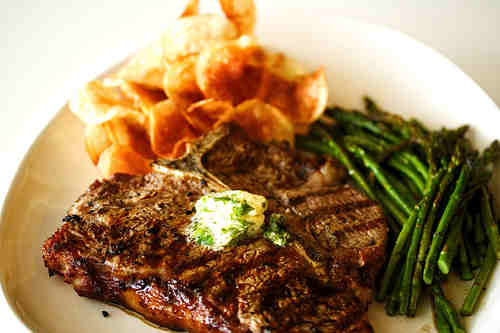 How to dramatically improve the flavor of your steaks with this method. By cookbook author and TV chef Jaden of Steamy Kitchen

But remember, you can’t make a silk purse from a sow’s ear. There is a limit to how much improvement you can get. This will never turn the steak into something it’s not, what it will do, is get rid of some water, which is something that isn’t really known for it’s flavor.

You can also step cook steaks. 103F for 30-60 min, then 120F for another 30-60 min, then finally raise to appropriate temp for desired level of doneness. Those two temps give the various enzymes time to go do what enzymes do best, break stuff down.

While you can occasionally come up with a true bargain, there is a bit of ‘you get what you pay for’ involved.

I’d rather buy a cheaper cut of better quality meat than an expensive cut of cheap quality meat. Sous vide makes it possible to have anything cooked to medium rare and meaty tenderness or luscious fall apart goodness. Besides, if you have something with great flavour your need less of it to feel satisfied.

I envy all of you out there, you guys got so many sources and choices to get your meats. Over here in Malaysia the only choice of imported beefs are mostly (claimed) grain fed ribeye and striploin from Australia and sold in supermarkets. And the ribeye costs a whopping US$40+/kg. I would say the beef rating to be somewhere near USDA select range…
And yes, I dry brine them too to get the most out of it.

If Aussie beef says ‘grain fed’ then it has to have been at least feed lot finished on grain. I think the minimum is 10 or 12 weeks, but I’m not really sure about that. I think most of the beef that goes into South East Asia comes from Queensland. Frequently Brahman or Brahman cross.

It’s still a struggle here in the southern end of Australia to get well marbled beef. After so long being told that animal fats are bad, consumers are only now starting to learn that marbled beef is good beef. It’s a slow process.

Thing is, food regulations here are sometimes a lil shabby. Beef labeled as ‘chilled’ could actually have been thawed and sold as chilled.
By the way, I tried a ribsteak from a supermarket in Miranda a couple years back, despite the lack in marbling the taste and texture is way off better then what we get here…

Food science will tell you that anything other than a few molecules like salt and sugar will not penetrate meat greater than a few millimeters below the surface. A dry brine is salt. Nothing more. The “flavor molecules” in things like pepper do not dissolve in water and hence, are insoluble.

It actually increases the amount of water inside the meat.

A few mm penetration below the surface would be sufficient to give flavour. However, flavouring prior to cooking is mostly an exercise in futility. Pepper and most spices lose their vigour and potency under heat (during cooking). IMO, it’s best to compose accompanying sauces if you really want to flavour your dish.
PS: Heat actually kills pepper which is extremely fragile. It makes more sense seasoning food to your personal taste once it’s in your plate at the table.

I must agree. During a sear, pepper will be burnt and bitter.