Eye of Round Steaks

At noon today some thick steaks cut from an on sale eye of round roast will have been in the water at 131°F for 24 hours. Depending if we want them for lunch or dinner they will be cooked for between 24-30 hours. This should be enough time to tenderize a rather tough cut. As often as I buy this cut of meat it will be my first attempt at sous vide with it. Normally I buy the whole roasts still in the vacuum bag from the processor and make jerky on my smoker.

I amusing one of the original machines from Anova: 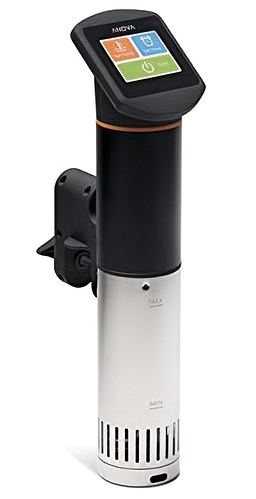 I have this first generation one plus the one that was originally sold in mass. If they eventually break I may break down and get a Wi-Fi enabled one.

I’ll look forward to any review you do of the results. That’s such a lean cut of meat that I don’t know where the flavor will come from. Perhaps applying a rub before searing would help? I have a great coffee-based rub from Bobby Flay that I use all the time with my other cuts of meat if you’re interested.

Since there was so much meat we ate it in batches. The first was eaten after 24 hours of soak, the second at around the 30 hour mark. Both were served with a sauce made from the strained juices and melted butter. The sauce was needed I believe as this is such a lean cut of meat.

The 30 hour pieces were a little more tender than the 24. Not enough to warrant the extra six hours of cooking though. Starting the meat 24 hours before the cook might be convenient. In this case I started at noon and removed the last bag at 6 for dinner. The meat tasted good on its own but I liked the additional flavor component added by the sauce. I cooked this at 131° F to be on the safe side. The result was on the more well done side of medium rare almost medium. Next time I try this I think I will lower the temperature to maybe 125°F. The steaks were cut from a roast and were roughly 2 inches thick. For the sear I used a skillet and a mayonnaise smear, sprinkled coarse salt on the finished pieces.

Nestor, i have a suggestion if you’re looking to add flavour to eye of the round, - get flavour into the meat instead of just on it by larding.

Larding is the French cooking technique that inserts strips of salt pork fat into lean cuts of meat before SV cooking, or otherwise. If you don’t have a larding needle they are available in hotel and restaurant supply stores, although a high end retail specialty store like Williams-Sonma might have them if you don’t mind being grievously overcharged.

I cut my lardons from the fatty streaks of firmly chilled pancetta to exactly fit inside the barrel of the larding needle. The suitably loaded needle is inserted deeply into the meat where the pancetta remains upon needle extraction. The cold fat is easier to work with and i prefer the salty garlic, black pepper, juniper and rosemary flavours to plain pork fat. Use lots.

As the eye of the round SV cooks it becomes gently perfumed by the pork transforming an ordinary cut of beef into something distinctively delicious. Think of it as do-it-yourself-wagyu.

You can cut any remaining pieces of pancetta into strips and gently crisp in a skillet. They make a wonderful topping for your salads, fried potatoes, sautéed vegetables, or the classical finishing touch to Boeuf Bourguigon.

huge thanks for your recommendations. i’m on a special diet now and i’m searching various recipes that fit my needs. thanks, this would help me with my future plans