I’m contemplating buying a second Sous Vide so I can do veggies at a higher temp while the meats sous vide at a different temp.

I’ve yet in my life to master a veggie side dish that is fabulous other than potatoes or higher calorie casserole veggie dishes. Would love a delicious sous vide veggie go-to recipe. Do you have a go-to veggie sous vide recipe that everyone loves?

Here is one that is good for the Fall 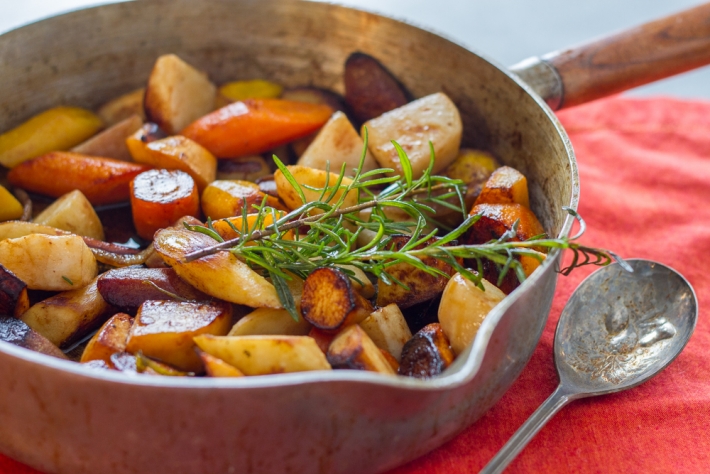 We love roasted root vegetables. We’re also the kind of people who get easily distracted. Unfortunately, the combination often results in overcooked carrots, turnips, parsnips, and onions (though we’ve certainly undercooked them a few times). Cooking...

Jilly bean…I do a carrots recipe from this site https://recipes.anovaculinary.com/recipe/sous-vide-honey-butter-glazed-carrots
I substitute maple syrup (the tree kind

) instead of the honey. (although the honey is great too. My wife always picked carrots out of anything I made. She loves them this way and they are even better with heirloom carrots if you can find them. I think the slight char is what really makes them go BOOM!

Oh I almost forgot…I found that zip-lock bags don’t like hi temp veggie recipes very much. This is a case where you should use the vac sealer bags.

Not sure if you’re into tofu, but this is one of my favorites. The honey butter glazed carrots is really good too!

Isn’t that the same thing as tofu?

No. bean curd sounds better but yes, they are the same thing…

I’ve just tried mushrooms for the first time… Omg, where have I been until now… I will regret this day forever as I just realized how many opportunities I had in the last year to cook mushrooms (and other veggies) SV and I’ve never tried it before.
I have to buy a second circulator

Male population, btw stay away from soy products as it effects estrogen hormone.

On the other hand it can be beneficial for womans in menopause.

I still need to try out sous vide mushrooms. I eat so much of it, I don’t really know why I haven’t. Anything specifically you enjoy from them being sous vide?

Do you mean the first time you’ve SV mushrooms? How did you prepare them?

They are much juicier and have more flavour than non SV ones. You can also taste the spices (I’ve added garlic and thyme) deeper in the mushrooms

I do eat them often as I’m on a keto diet and they are the perfect side dish, but never had them SV.

I’ve bought a second one for that exact reason… I love corn on the cob done in the sous vide… so I bought the smaller 800watt bluetooth unit. ( I wouldn’t buy 2 identical units as you can only control 1 with the app from what i’ve seen.) I use my phone to control my b/t-wifi unit & my tablet to do my bluetooth unit… & it was slightly cheaper, but it works well. I’ve honestly only done corn as a vegetable, but, after reading this, i’m anxious to try mushrooms.

How is the corn different in sous vide than other methods?

My go to corn on the cob is to place the corn in husks in the microwave for 3-4 minutes (the opposite of sous vide but exceptional results). Cut off the non-hairy end and squeeze the corn out through the opening. Hot, no silks, clean as a whistle. Crisp and delicious.

Well it cooks in its own juices… I’ve used the recipe from Anova recipes, there are a few, but basically I tweaked it some. I buy the cobs from Costco, they’ve already had the husk removed. Seal them in a bag (best to do double seals on each end though… as the corn cooks it emits air or gas or something, but the bags inflate. On that same thought, don’t put more than 4 in a bag or it’ll create too much air and they’ll float. I cooked some for a party on August long weekend & had about 10 cobs per bag… they looked like a waterbed mattress overfilled… lol.
I put in some italian seasoning, about 4 tablespoons of garlic butter, some chili peppers, Himalayan sea salt & then cook them as per the recipe… When they’re done, i’ll drop them into a bowl & pour the juices from the bag over top of them, sooo juicy & tender… delicious.
I used to do corn on the bbq… .soak them in their husks for an hour in water, then throw them on the bbq, but I find these are much tastier.

Broccoli. 20 minutes at 194 degrees. Perfect. Trim the tops close, the stem doesn’t get done well if it’s too long.

This is why I got my second Anova.