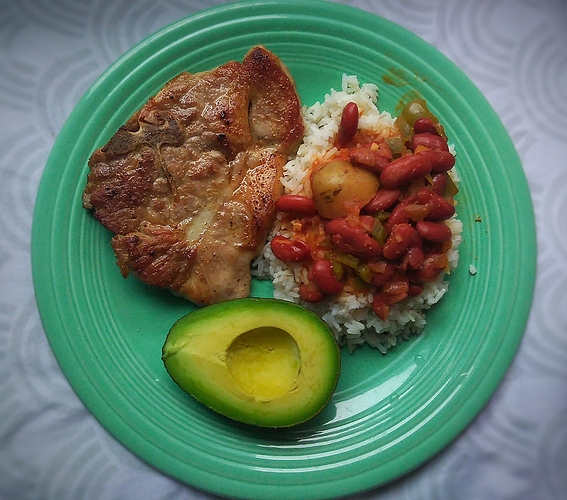 Made a few mistakes with this. I think I should have had it cooked for longer. It wasn’t as juicy or tender as I would have liked.

Any suggestions or tips for the chops is very much appreciated! It was still good, though. Just not amazing

Chops were seasoned with salt, garlic, and black pepper. Seared in a pan.

If you’re interested in the recipe for the beans:
Habichuelas guisadas (Pink Beans in tomato sauce stew)

Drop the temperature on your pork by 10F. 130F should be your go to temperature for pork, lamb, goat, venison, kangaroo, beef (with possible exception of steak)… Basically any 4 legged beastie.

Suggested time would be an hour or two.

You didn’t mention the thickness.

Thanks @Ember. I don’t cook pork very often (probably my second time - but this is also a different cut from my first one). I should have gone longer - saw a recipe for 45 minutes, and I hopped on it since I was on a time crunch for dinner.

Have you happen to ever have sirloin pork chops? I was also wondering how different they were from other cuts. It seems like this cut is on the dryer side too (according to the internet).

Oh, and they were an inch thick. I’d say it’s possible they were a tiny bit under an inch. But I didn’t measure them.

Sirloin… So we’re looking at the rear section of the pork loin. Modern pork is bred to be finely grained and dense with little or no fat in the muscle bulk. Chalk it up to people having a fear of fat for the last 40 odd years. OK, that’s my little pork whinge over with.

I really haven’t done much with loin for years because it can have a tendency to be dense and dry. I haven’t even revisited it since starting to play with sous vide. The last thing I did with pork loin was to bone it out, roll it and cure it as ham.

It’s also worth noting our pork tends to get portioned out a little differently to yours, as well as being labelled differently.

I go for the other end when I want pan seared porky goodness on my plate and a pork scotch fillet ‘steak’ rather than the classic chops these days. I find the flavour is much better and worth the slightly higher price.

Not just in the US. It seems to be most countries. Commercial pork is typically bred from Landrace stock. Chosen for the long barrel shape. It’s bred to be lower in fat content and higher in muscle mass. Plus it’s sent to slaughter at about 6-11 months old before they start to develop the fat layer. Slaughter weight tends to be around 60kg (135lb) whereas traditional ‘bacon’ weight is more like 110kg.

I did manage to talk someone into growing a pig out to 80kg for me, but they not only charged me for the weight of the pig, but the cost of the extra food. He wouldn’t believe me that I wanted 90+ kg because I actually wanted the fat content for charcuterie.

OK… There’s my beef for the day. I’d better step down from the soap box before someone kicks it out from under me.

Thanks guys for the tips. Lots of mistakes here - probably my first mistake was what I picked up.

I know my veggies, but meat I’m still trying to figure out haha.

Just remember, commercial meat production is ALWAYS about quantity not quality. Heritage breeds, whether for pork or chicken or even beef, are about quality and flavour.

I can get great pork from a farmer/butcher in Wisconsin… It is about a 2 hour drive each way but worth it. His prices are a little higher but not exorbitant. It also takes a little planning as virtually everything he raises is promised well before processing. @Ember you are right to sing the praises of meat raised from good stock the old way. Most people have never had the joy of a great piece of meat. My other favorite is to get highly marbled dry aged beef. The flavor is so much better.

This is very true, but there is a second factor to consider with poultry here. Most commercial poultry in the US is ice bath processed. This is mostly just a US thing, and I don’t think it’s that common elsewhere in the world. So not only do you have a bred for profit not flavor bird to begin with, you are also washing these things down sluice tubes with some pretty dirty chlorinated water and rinsing out any remaining flavor. The birds pick up about 4% water in the process too, diluting an already bland flavor. Some manufacturers even go so far as pump up the chicken to 10-11% additional weight with water.

Just getting rid of that one process by using blast chilling, aka: air chilling, will make a huge difference. As a bonus, the US companies that have made the much larger capital investment in air chilling equipment, because they are now a specialty meat supplier, are likely also taking better care in the raising and breeding of the birds.

@AlyssaWOAH - in your area, you should have no problems finding products from Petaluma Poultry and probably also Smart Chicken. Both companies use air chilling equipment. You can also try a Halal market, as their guidelines prevent the use of certain processes.

Eggs are another food that has been impacted by the desire to maximize profits. We get ours from a local farm and the flavor is noticeably better. The yolks are darker than grocery store eggs and the flavor definitely a little more intense. On the fun side we also get maybe 5-10% of them with double yolks. This high number I think is because we get the Jumbos which are bigger than the standard grades. I have had to experiment with my times for soft and hard boiled eggs but now that the times are locked in they are perfect every time.

Thanks everyone for your input. Usually when I sous vide, I don’t skimp on the quality. I am usually conscious about what I pick up. But this time around I was trying to save a few bucks - so the quality of meat was subpar. Learned my lesson!

On the topic of eggs - I have noticed the quality of eggs differ so much, depending on where you purchase them. Even just comparing the color and texture of an egg from the dollar store vs organic farmer’s market is totally eye-opening (yes, dollar store eggs were my thing in college).

There’s not much choice when you’re on a tiny budget. But I’m lucky enough to get eggs from one of my school kids who sells them for pocket money. I can get duck eggs and quail eggs when I need them too.

Very cool! I need to find a cool kid with quail/duck eggs!

@AlyssaWOAH, 99ranch should have both. Quality is upper mid level, not whole food’s (aka whole paycheck) level, def better than safeway or nob hill / raley’s.

This error message is only visible to WordPress admins Error: API requests are being delayed for this account. New posts will not be retrieved.There may be an issue with the Instagram access token that you are using. Your server might also be unable...

Also, their fish counter is on par with many fish markets.

Haha! If only you guys knew how frugal I am! I definitely shop at stores on the more affordable end (discount shelves make me giddy). Lemme check out 99ranch - never heard of 'em. Thanks @acs.

I guess that is one of the few benefits of living near Chicago. To the North and West we have a lot of small farms with great products, small cheese producers that make everything from their own animals. To the East towards Chicago we have ethnic neighborhoods with virtually any special product you can imagine. None of it is overpriced but the gas to get there costs you.

And as we all know… Blessed are the cheesemakers.

I have discovered someone in the area that raises Dexter cattle. If I could barter for some of that I’d be in heaven.