I’m curious as to what’s everyone’s preferred searing method is in here?

I personally use a regular pan (considering getting a cast iron skillet). I cook primarily for just myself, so this makes the most sense to me!

I generally apply cooking spray and seasoning and use the oven at 425F/220C for about 15 minutes. Sometimes I need to go another 5 minutes if the food is just out of the refrigerator.

I have yet to sear in an oven. Do you think this method is best with bigger chunks of meat? @RichardOL

Ye, because the heat comes from more directions, especially if it is on a rack. the bigger the piece, the better. At 15 minutes, the heat cannot get far. This Christmas roast is the biggest I have done. 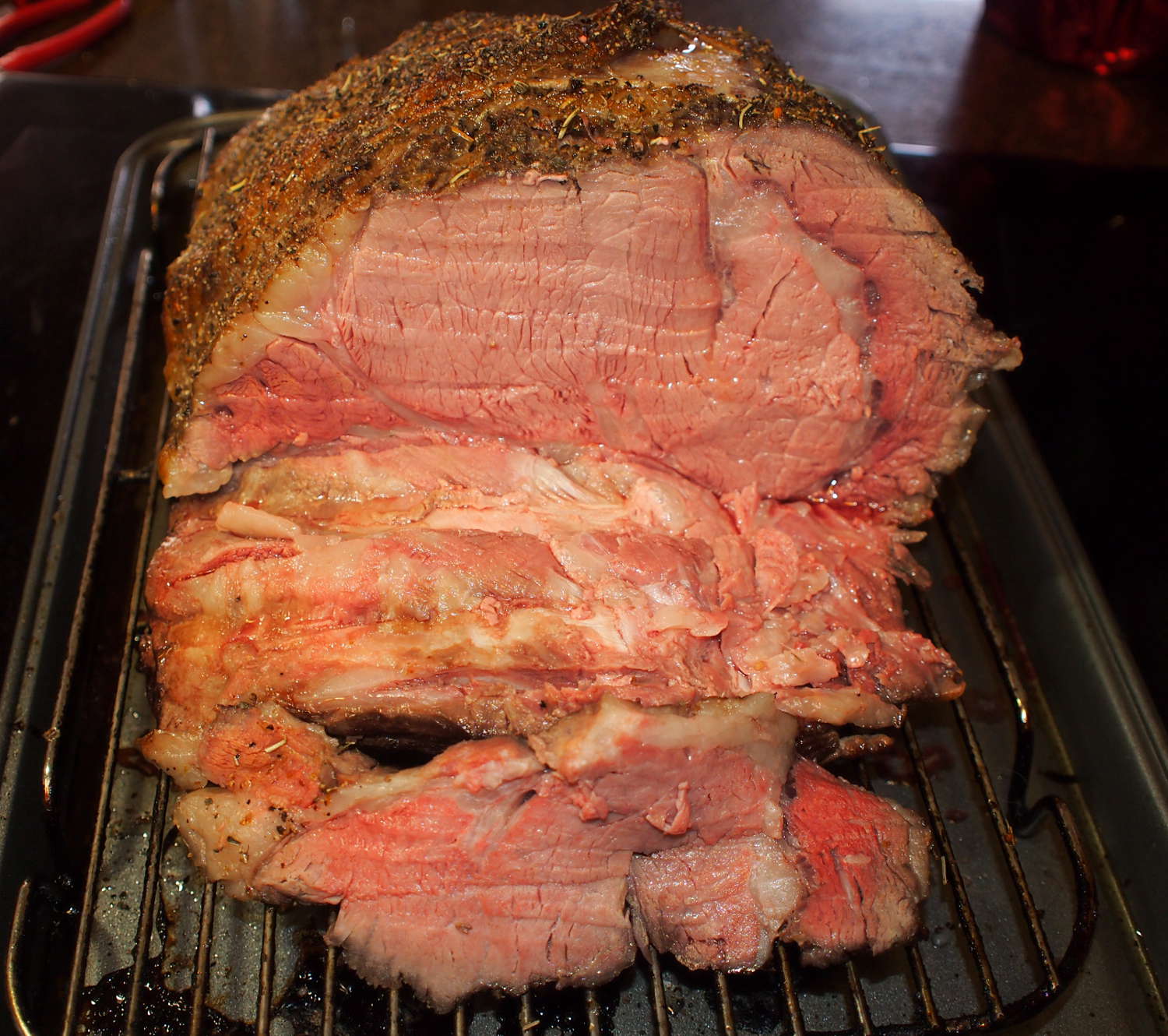 Steaks less than a couple of inches even they work. These lamb chops were not very thick. 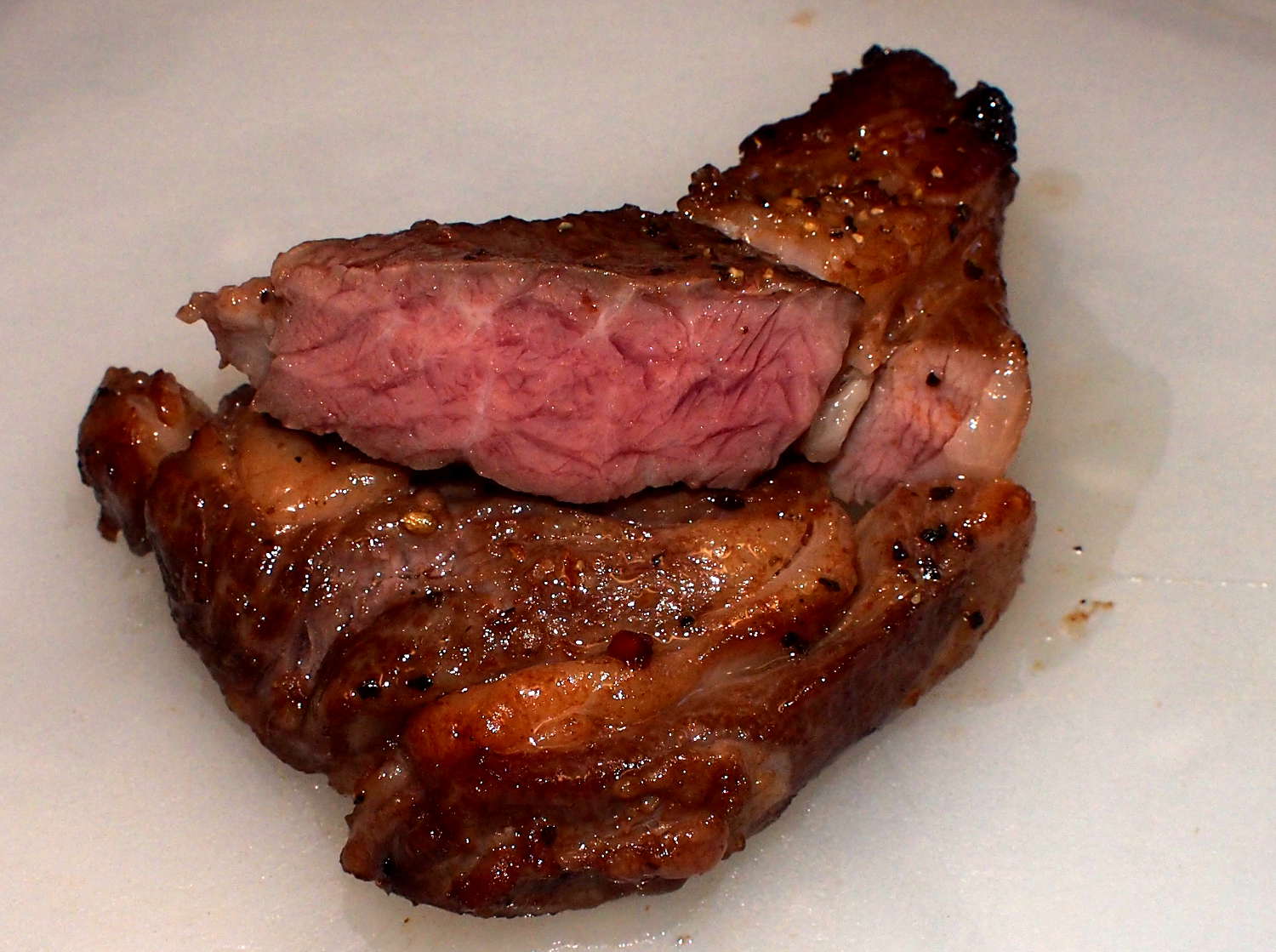 Ah, okay. Yeah, that makes sense for thicker cuts. How long do you have the thinner cuts in the oven?

The same, but I let them cool to room temperature. I have come to like resting meat anyway since some cuts release quite a bit of water and will absorb some back as it cools

It varies on the meat, the cut, the style, the weather and what I feel like.

I regularly use: cast iron, a propane grill, a santa maria grill with cut up wine barrels (they burn really hot and really quick, not good for much else), a searzall or a blowtorch.

The one thing, ok, two, I haven’t done yet is a rosebud on one of my oxy-acetylene torches, and LM2500 exhaust wash.

I personally use a regular pan (considering getting a cast iron skillet). I cook primarily for just myself, so this makes the most sense to me!

Don’t skimp and don’t fall for marketing BS by the celeb chefs pimping their own Chinese made sub-par lines. Buy US made Lodge brand, you won’t regret it.

@acs lol thanks - gonna check it out. Woaahhhh, you’ve experimented with A LOT of methods. Do you have a favorite?

for simplicity and ease of use: electric Cuban sandwich press, cast iron and propane grill. Turn the knob, it heats up, you sear, it’s done. The Cuban sandwich press has a unique feature of cooking two sides at once. Not sure how much difference that makes, but it’s neat. Only reason I don’t use it more is that I don’t use it enough to keep it that handy. Cast iron and the grill are always at hand.

Searzall is good, but it’s a commitment It’s slow. I actually like my searzall better for non sous vide stuff. All the crap I used to use a creme brulee torch for, 2/3 of that, I now use the searzall for.

900F +/- ish WFO is is great, but you have to plan in advance. Way in advance. That’s minimum 45 minutes heat up time after the fire stabilizes. You’re talking an hour fifteen plus.

The charcoal chimney, messy. When it comes to blowing the ash off the coals, Alton Brown must have the world’s most powerful hair drier for the hair he hasn’t had for at least a decade or he dries his hair with a gas turbine exhaust, because even a leaf blower left ash and grit behind that fell onto the steak.

Yes! I grew up seeing Cuban sandwich presses around - they are pretty magical. I have to ask…have you ever tried a Cuban sandwich!?

A real Cuban is roast pork, ham and salami with Swiss cheese and a spicy sauce. It is a great sandwich even when made on a french roll instead of pressed.

There is a version that includes hot dogs and lettuce with mayo that taco trucks sell that is weird and hard to handle. If you get one of these, you have NOT had a Cuban.

YES! I grew up in a Cuban neighborhood in Miami, so I know exactly how these sandwiches are supposed to be! They are sooooo good. Man, I miss those sandwiches. Always had it on Cuban bread, though. @RichardOL

Yes! I grew up seeing Cuban sandwich presses around - they are pretty magical. I have to ask…have you ever tried a Cuban sandwich!?

Well, there were these two open minded Cuban women I once knew…

Yes. Had many. I know it’s kind of a tourist trap, but I kind of have a soft spot for Versailles, their Cuban sandwiches, fufu and cafe con leche (and I don’t even like sweets).

A real Cuban is roast pork, ham and salami with Swiss cheese and a spicy sauce. It is a great sandwich even when made on a french roll instead of pressed.

Not sure about the salami or the spicy sauce. I believe it’s traditionally just buttered Cuban bread (like French, but sweeter and IIRC, no egg wash crust), mustard, pickles, swiss cheese, Cuban sweet ham and roast pork. I think salami and roast beef are more modern additions. And, if it’s not pressed (no ridges), it’s a hoagie, a grinder, or a sub because it ain’t a Cuban sandwich.

I haven’t found Cuban sweet ham out where I live, so I have to substitute Black Forest ham. (Apologies)

As for the pork, I once asked a friend of mine, who happens to be Cuban, came over here decades ago, as did his wife, for his mojo recipe because I couldn’t seem to get the pork quite right, and he pointed me at “Three Guys from Miami” and their recipes.

The Three Guys From Miami show you how to make Cuban, Spanish, and Latin American food. Three Guys. Hundreds of recipes. On the web since 1996.

Yeah, authentic Cuban sandwiches are only made on Cuban bread. But I’ve seen it made on other breads - still tastes good. I am actually not a huge fan of Cuban bread (I find it on the drier side).

Three Guys From Miami are legit.

I suspect that substitutions for the bread are common since it’s not the easiest thing to find outside of areas with a decent sized Cuban population.

Recipe seems simple enough, but I kind of suck at baking, might give it a try anyway though.
http://www.huffingtonpost.com/amber-degrace/cuban-bread-recipe-photos_b_650066.html

Definitely depends on the cut, et al. But my most common approach is a forged steel pan and rice bran oil. I actually prefer this currently to my cast iron pan which is a little small and suffers from over crowding.

If I’m oven browning then it’s an enamelled cast iron roasting dish with a little duck fat in a 250C oven.

What I want to try is high temperature in my oven and turn on the convection option. This should provide good searing quickly.

I like using a carbon steel fry pan and the basting method shown by Alyssa above. But a propane blow torch with a Searzall attachment is fun! 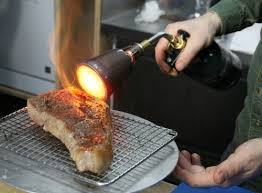 Nice! I have been a bit afraid of using the propane blow torch, mostly because I am a very clumsy person. But it does look super fun! @Fivebig