I’ve been using my WiFi APC since it arrived around New Year. On the whole the Android app has been mostly OK. There have been a few disconnections, but usually the app control has reconnected without resetting the timer on the APC.

Today, however, I updated to the new version of the app requiring login to the Anova website. I’m working on a 24 hour cook. Since I started the cook 4 hours ago, I have had 6 losses of connection, two of which required a restart of my router to get the APC visible again. I’m beginning to agree with the folks who suggest that the WiFi option is a waste of money and I’d be better off putting the monetary saving into a TimeStick. Trouble is, I bought the WiFi device to be able to keep an eye on my cook while I’m not at home.

Getting a little frustrated with it in the last week or two, if I’m honest. It’s a brilliant device, but far from perfect.

to my knowledge the apc is unaffected by the app (except when pairing), and upgrades to the app should have zero effect on the cooker.

im not saying you’re not having problems, i just suspect you’re not seeing what you think you’re seeing. next time try disabling and reenabling wifi on your mobile device and seeing if that restores connection. disable for approx ten secs before reenabling. if this doesnt help, try cycling the power on the cooker (which i imagine you dont want to do as you’re cooking, but maybe test it out later).

i’m interested to know what you find, as the two tests have different implications about what is occurring.

The pairing between the app and the APC just seems far from robust. I’ve tried from Samsung phone, Samsung tablet or Chuwei tablet. I’ve run out of other controllers.

next time it looks like the router needs a reboot, try: 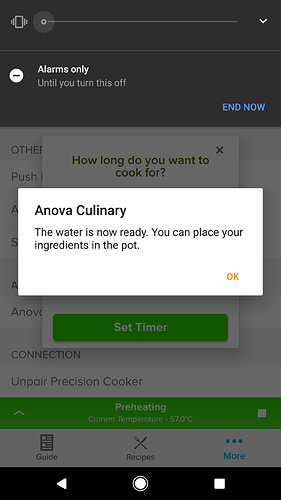 I’m using the APC directly in a manual way right now for my cook, but something went seriously wrong with the Android app and the APC.

PS. Please remove the login and telemetry of the device…Or at least give me the option to send anonymous stats.