Getting water to temp

Hi, it has taken almost an hour to get room temp water up to temperature of 183 f.  Is that normal?

It could be.  There are factors here that you haven’t stated.  What’s the temperature of the room?  What container are you using (and what volume?) - non-insulative containers will take longer as they’ll lose heat to the room.   Not having the container at least partially covered will also prolong the heating process.

Me, I try to shorten the process by using hot water from the tap, to give the PC a head start - I also use a Cambro 4.5 gallon polycarbonate container and have the cover on while bringing it up to temperature to shorten the time as much as possible.  Others have had a lot of success by customizing plastic coolers, which are insulated, to minimize heat loss.
AngelArs January 4, 2016, 9:14pm #3

Hi, it has taken almost an hour to get room temp water up to temperature of 183 f.  Is that normal?

Lower wattage units (800 watts) will take up to 30% longer to heat up the water than higher wattage units (1100 watts). As suggested you can use hot water to help it a bit, just don’t go over the target water temp (183F).

Using a properly sized vessel will significantly shorten the heat up time as well. WHen cooking for myself I often use a soup pot which heats hot tap water pretty quickly.

@fischersd I do the hot tap water, too. Works like a charm.

My own personal trick for when I’m really impatient (i.e., weeknights when I don’t have food cooking during the day with WI-FI), is to put the pot on the stove for a few minutes while I’m prepping the food. I don’t recommend doing this while the device is attached to the pot and running (but in full disclosure, the answer is yes, I have done it once or twice…shame on me.)
Anywho, the trick is to remove the pot from the stove at the first sign of tiny bubbles (right before the water starts to “quiver”). At that point, temp is a little under 140F, so for most things I cook when on weeknights when I’m in impatient mode (read, hangry), it’s perfect. I simply pop the PC onto the pot and let it do the rest.
I don’t mind overshooting by three or four degrees when I’m giving the water my hangry pre-heat on the stove, because the temp drops a few degrees when I drop the meat in anyways.

For things like a steak I also dont think it hurts to put it in early. That way as the water reaches temperature the meat is not far behind. Thicker steaks and roasts will of course take a little longer to stabilize.

How
much water, how fast, what was the starting temperature of the water,
and was this sterile water? All these are factors that could have contributed.

How
much water, how fast, what was the starting temperature of the water,
and was this sterile water? All these are factors that could have contributed.

My Tap water is not really hot, so once kettles are done the tap water + boiling kettles brings temp to right at 128° in a styrofoam cooler.

Because the unit sits high in the cooker it takes about 4 pictures of tap water + 2 kettles to get to proper water level and 128°. 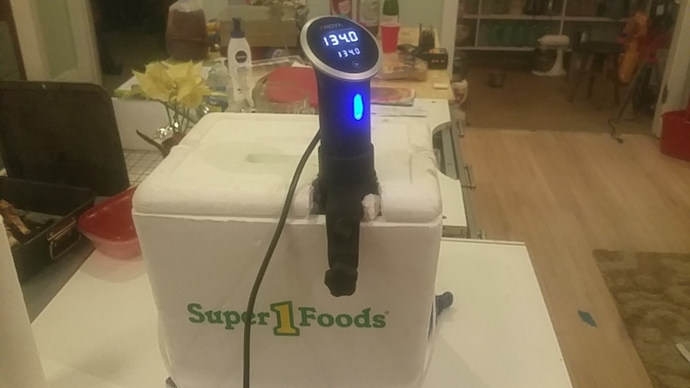