What is everyone cooking for the upcoming holidays?

Saturday I’m gonna throw some racks of lamb in! What is everyone thinking? Can’t wait.

I’m not hosting any party nor event this year, so the pressure is off my shoulders. Though, I will definitely cook more ribs, or sirloin steaks, or maybe meat balls! My first meat ball attempt wasn’t great(cooked too hot), so I have to do it again…

I am doing a turkey; brined in heavy salt/herb bath for 24 hours, then 135F for 24hrs. This will be my second bird since an overwhelmingly received dish at Thanksgiving. I deep fried that bird for 2 minutes to crisp the skin; everyone loved it. For the second bird (for my wife and I only) I did not bother with the deep-fry, but did boil the skin and bones and jus from the bag…strained, then made turkey gumbo. Now, jonesing for more gumbo, I am doing another turkey for Christmas.

I’m going to go get a McRib sammich.

That sounds awesome! I haven’t done turkey yet. Wife’s family is pretty traditional so I always just roast normally, after a 2 day dry brine. Are you breaking down the bird and cooking separately, or whole?

I am cooking it whole. For the bag I use the thin white Glad tall kitchen garbage bag and immersion-evacuate the air.

@acs; I love the McRib, but have not eaten any fast food for years. I live on a little island and all the fast-food joints are on the other side…and I like playing with food too much…so, I decided to make my own version of McRib: I make a heavy-smoked salt, spicy dry rub and coat the baby-backs, vacuum seal, then let them stay in the refrigerator 24 to 48 hours. Then, sous vide for 24 to 36 hours. They are so tender you can just twist the bone out to create a boneless baby-back rib. I use the jus as a base to create a smoke-salt, mustard, molasses BBQ, dip them, then flash them for 3 minutes in a 500F BBQ grill to caramelize/bind the sauce. Come on over…I’ll share.

While I feel that for my tastes, bbq ribs should have a resistance and “pull” to them, what you have come up with sounds damn good. I might have to try it one of these days.

If you don’t mind me asking, what temp are you cooking at?

I made 12 tenderloins for my whole extended family, not too hectic considering it was that many people.

I also taught my grandma how to use the Anova and got her one for X-mas, and she loves it!

Here is a quick video of the final sear on the grill:

Filming credit to my dad!

This is the turkey after 48hr. brine, 24 hour SV, then torched for bite. 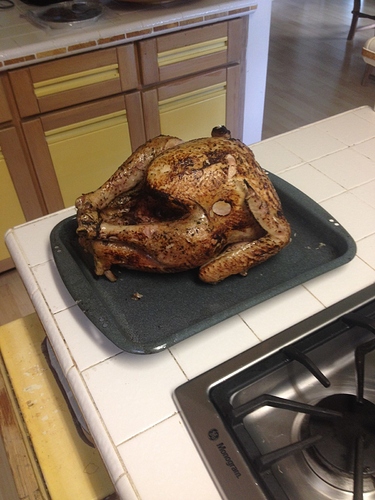 A whole turkey? No shit?

How did that work out with the hollow body cavity and all?

And where the heck did you find a vacuum seal bag that large?

I used the Glad tall kitchen garbage bag and did not tie it. I left the top loose, draping over the side of the SV bath container, then put a spacer to force-immerse the bird. The bag is to thin it sucks into the chest cavity as the air escapes, filling the chest cavity with water, but totally sealed by the bag.